Ōkuma Shigenobu in his youth 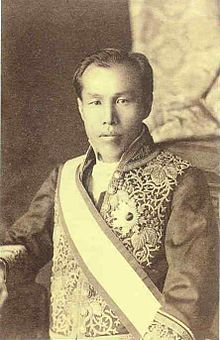 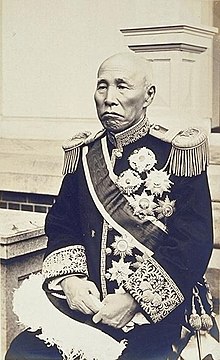 As one of the most popular statesmen in Japanese history, he was one of the people who promoted the spread of Western technologies in Japan early on. He founded Waseda University .

Ōkuma Shigenobu was born the son of an artillery officer in Saga in Hizen Province (now Saga Prefecture ). His training initially consisted mainly of studying the books of the Confucian philosophers and the resulting Japanese works such as Hagakure by Yamamoto Tsunetomo . In 1853, however, he left the traditional Japanese school and instead attended a Dutch school.

After the Dutch school was merged with the provincial school in 1861, Ōkuma Shigenobu became a lecturer at this school. Ōkuma sympathized with the Sonnō-jōi movement, which grew stronger during this period. He tried a rapprochement between the rebels of the Chōshū - Han and the Bakufu to enable.

During a trip to Nagasaki , Ōkuma met the Dutch missionary Guido Verbeck . He taught him the English language and gave him copies of the New Testament and the American Declaration of Independence . These writings completely changed his views on the Japanese form of government. While he was previously firmly rooted as a warrior in the traditional feudal system, he was now a staunch supporter of a new constitutional government of Japan.

Ōkuma traveled frequently between Nagasaki and Kyōto in the years that followed and became active in the movement to restore imperial power. In 1867 he traveled with Soejima Tanetomi to Edo to present the newly named Shogun Tokugawa Yoshinobu with a plan to restore the power of the Tenno . However, he did not hesitate to declare her to be Rōnin immediately . On the way back to Kyoto, the two were captured. Ōkuma then spent a month under house arrest in Saga.

Political career during the Meiji period

After the Meiji Restoration , Ōkuma was first in the service of the Foreign Office, but soon received another post as head of the program to reform the Japanese currency system. In 1870 he became a member of the government cabinet and finance minister. In this role, he carried out reforms to Japanese property law and tax law that supported Japan's early industrial development. However, in 1881 he was fired after having had a series of disputes with other cabinet members over the status of the individual's right in Japanese society. Among these, Itō Hirobumi should be mentioned in particular , who, unlike Ōkuma, was a proponent of an authoritarian state based on the Prussian model.

In 1882 Ōkuma Shigenobu was one of the co-founders of the Constitutional Progressive Party ( 立憲 改進 党 , Rikken Kaishintō ), which other well-known leaders of the Meiji period soon joined. Among those famous people were Ozaki Yukio and Inukai Tsuyoshi . In the same year Ōkuma founded the Tōkyō Semmon Gakkō in the Waseda district of Tokyo. This school later became Waseda University, which is one of the most prestigious in all of Japan.

Regardless of their rivalry, Itō appointed Hirobumi zumkuma as Japanese Foreign Minister in February 1888. In this position he was supposed to dissolve the “unequal treaties” that had been concluded with the European powers through Bakufu . However, Ōkuma's clashes with other members of the government soon increased again. After his right leg was torn apart by a bomb from Gen'yōsha member Kurushima Tsuneki , he resigned from his post in 1889. Matsukata Masayoshi reappointed him foreign minister in 1896, but this time he resigned after only one year in office.

In June 1898 Ōkuma Shigenobu founded the constitutional ruling party ( Kenseitō ) and was commissioned by the Emperor Mutsuhito as Prime Minister of Japan to form a cabinet. This cabinet was the first one-party cabinet in Japanese history. It met with intense opposition from the Liberals and the Progressive Party and lasted only a few months before all ministers resigned. Ōkuma remained a party member of the Kenseitō until he withdrew from political life in Japan in 1908.

After his political resignation, Ōkuma became president of Waseda University and a member of the council of Japanese civilization society. He translated a number of European and American texts into Japanese and raised funds for Japan's first expedition to Antarctica .

Political career during the Taishō period

Ōkuma returned to politics in 1914 when the country was shaken by a government crisis. The government of Yamamoto Gonnohyōe was forced to resign because of the Siemens scandal . Ōkuma became Genrō - member of the Council of Elderly Statesmen - and Prime Minister and brought his supporters into a cabinet together with the parties Rikken Dōshikai and Chūseikai . In the further course of the year the Ōkuma government declared war on the German Reich and thus entered the First World War on the side of the Entente . In 1915, Ōkuma and Katō Takaaki drafted the Twenty-One Demands on China , which should secure Japan domination over the country.

Due to the Ōura scandal of 1915, Ōkuma's cabinet quickly lost popular support and its members jointly resigned in October 1916. Ōkuma returned to Waseda and died there in 1922. About 300,000 people attended his state funeral in Hibiya Park in Tokyo. He was buried in Gokoku-ji .