The monastery Cîteaux [ siˈto ] (also Cisteaux ; lat. Cistercium; abbatia BM de Cistercio ; German Cisterc ) is the mother monastery of all Cistercians and is located in the municipality of Saint-Nicolas-lès-Cîteaux in the Burgundy region about 25 km south of Dijon , the capital of the Côte-d'Or department . It lies on the banks of the Vouge River , a tributary of the Saône .

The Abbey of Cîteaux is particularly important as the origin and starting point of the Cistercian order , which had a great influence with the establishment of subsidiary monasteries ( filiations ) throughout Europe . The influence on the expansion of the order by Bernhard von Clairvaux is decisive.

Dissatisfied with what he saw as the lax way of life of the Benedictines , the seventy-year-old Robert von Molesme, with the support of Duke Odo I of Burgundy and around twenty other monks , founded a monastery community in 1098 in the middle of a reed-covered wetland (old French cistels 'reeds'), which to wanted to return to a verbatim observance of the Benedictine Rule . Since Robert had to take over the office of abbot in Molesme again soon after the founding in Cîteaux, Stephan Harding is considered in some sources as the founder of the Cistercian order named after Cîteaux. In any case, it was Harding who ran the abbey between 1109 and 1133 and, with his Carta Caritatis, created his own, previously nowhere known order constitution, through which the Novum Monasterium set itself apart from the Benedictines and was considered an independent, new order.

The monastery soon adopted the place name Cistercium (shortened to Cîteaux in French ). However, it is not entirely clear where this name comes from and what it means. Three interpretations can be used:

Starting from Cîteaux, the four primary abbeys La Ferté , Pontigny , Morimond and Clairvaux were founded between 1113 and 1115 , and later many other daughter monasteries. Around 1300 there were around 630 Cistercian monasteries across Europe. 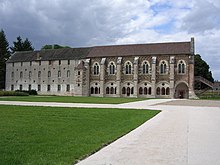 Most of the German filiations took place through the primary abbey of Morimond. During the French Revolution , the Cîteaux Abbey was expropriated and sold to speculators in 1791 . It was dissolved and looted and largely destroyed in the years that followed. The church that contained the graves of the first Burgundian dukes no longer exists either.

In 1898 the abbey was repopulated by monks from La Trappe and Sept-Fons and incorporated into the Cistercian Order of Stricter Observance (Trappists). Today around 35 monks live there. Of the historical buildings, a library from the 15th century, which has been extensively renovated in recent years, and an administration building from the 17th century have been preserved. In the library there are richly decorated facsimiles of pages from books produced in the abbey in the Middle Ages. The church, cloister and all other buildings are more recent. The extensive facility with extensive agriculture is surrounded by forests and fields. The monks have various tasks, such as the management of the 400 hectare farm with around 120 cows, whose milk is used exclusively for the monastic cheese production of the Abbaye de Cîteaux . The cheese is sold directly to tourists in a shop attached to the abbey.

The abbey is open to visitors every day. At certain times, you will be offered guided tours through some buildings, such as the prayer room, the cloister, the library and a former farm building. In the latter room one can see, among other things, an exhibition of the then advanced medieval irrigation system for the lands of the abbey.

In the abbey, the Association pour le Rayonnement de la Culture Cistercienne ( ARCCIS ) maintains the Research and Documentation Center Center d'études et de recherches pour la culture cistercienne (CERCCIS) with a scientific advisory board made up of representatives from French-speaking universities. CERCCIS publishes in collaboration with Editions de Bellefontaine (in Bellefontaine Abbey ) and other publishers.

Liturgy of the Hours

The monastic day is divided by the celebration of Mass and the Liturgy of the Hours .

Moreover, since 1962 the respective Abbot General of the Trappists has held the honorary title of Archabbot of Cîteaux.