The title of this article is ambiguous. Further meanings are listed under Pater (disambiguation) . 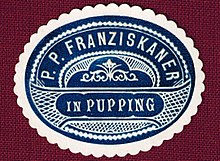 Seal mark of the Franciscans in Pupping ("P. P." stands for Fathers )

In German-speaking countries, this form of address is generally only used by priests. Religious brothers who have not received the sacrament of ordination are usually addressed as brothers (here, too, the Latin term frater is sometimes used). In Austria it is sometimes customary to address religious men with perpetual profession who do not belong to the clergy as fathers . On the other hand, there are religious communities that the address for the priest of the Order Brother or Frater prefer. Members of an order of canons (e.g. Premonstratensian , Augustinian canons ) are addressed as "Lord" and not as "Father".

In the Romance languages , the salutation Pater is used in general for all priests and deacons, including the diocesan clergy , mostly in a local variant such as B. Padre in Italian and Spanish , Père or Abbé in French (which both means father or father , whereby Abbé is only used for the lower secular clergy).