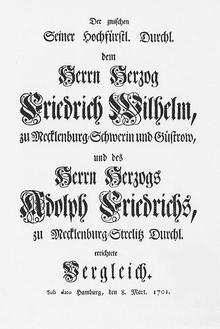 Cover of the Hamburg comparison of 1701 ( reprography )

The Hamburg comparison (also: Hamburg hereditary comparison ) is a dynastic house contract of the House of Mecklenburg . It was closed under significant influence by representatives of the Lower Saxon Empire on March 8, 1701 in neutral Hamburg and ended a more than five-year succession dispute between the Mecklenburg dynasty over the (partial) duchy of Mecklenburg-Güstrow , whose duchy had expired in 1695 in the male line capable of succeeding the throne.

The settlement sealed the third main division of Mecklenburg and formulated an inheritance division of the former Güstrow subduchy, whose current earnings value was rated for this purpose and distributed in real terms to the disputed parties in equal proportions.

The (partial) duchies of Mecklenburg-Schwerin and Mecklenburg-Strelitz , with limited autonomy, emerged . Both parts of the country were each formed from several parts of power:

The renewed division of the state caused a further weakening of the political position of the Princely House in the feudal corporate state of Mecklenburg and, in addition to the Land Constitutional Hereditary Comparison (LGGEV) of 1755, contributed to Mecklenburg being considered the most backward German territory at the end of the monarchy ( 1918 ). The real historical significance of the Hamburg comparison lies in the fact that it introduced the principle of succession of the primogeniture binding for the Mecklenburg dynasty (admittedly with a considerable delay compared to other German states) .

The Hamburg settlement of 1701 formed the most important legal basis for the existence of two partial rulers under the umbrella of the Mecklenburg state until November 1918, which internally acted largely independently and developed their own administrative structures.

Legal dispute before the State Court of Justice in 1926