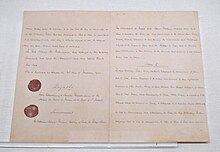 The Anglo-Japanese Alliance ( Japanese 日 英 同盟 , Nichi-Ei Dōmei , literally: "Japanese-English Alliance") was an alliance concluded on January 30, 1902 between the United Kingdom and the Japanese Empire . The treaty signed by the British Foreign Minister Lord Lansdowne and the Japanese Ambassador in London, Hayashi Tadasu , was renewed and expanded in each case in 1905 and 1911 and represented an important milestone in the departure of the British from their foreign policy called splendid isolation the alliance in decline due to various political differences of opinion and was replaced by a four-power pact on US instigation in 1922 and finally officially dissolved in 1923.

The possibility of an alliance between Great Britain and the Empire of Japan was first considered in 1895 when the British refused to join the anti-Japan intervention of Shimonoseki , consisting of France , Germany and Russia . Anglo-Japanese relations were further enhanced by the close cooperation between the two countries in modernizing Japan and suppressing the Boxer Rebellion . Important newspapers in both countries repeatedly called for an alliance agreement to be concluded, sometimes encouraged by individual politicians. The final trigger for negotiations, however, was Russia's aggressive expansion in the Far East, which was viewed with concern in London and Tokyo. This is how negotiations began after Russian troops occupied Manchuria during the Boxer Rebellion .

Nevertheless, there were also reservations about an alliance. The British were unwilling to give up their isolationist foreign policy of splendid isolation completely and to irritate Russia too much. In Japan, on the other hand, a strong faction around Prime Minister Itō Hirobumi advocated finding a negotiated compromise with Russia on the respective interests in China. This group feared that Russia might feel tied up by the alliance and adopt a more aggressive tone towards Japan. They argued that an intra-Asian friendship treaty with Russia would also appease the United States, which were concerned about Japan's growing political influence beyond Asia. In addition, the British were unwilling to increase Japanese influence in Korea, while Japan was unwilling to support the British position in British India .

The concrete negotiations finally began after Katsura Taro took office in London in July 1901, but continued until November because of the dispute over Korea and India, when Ito, who had traveled to Europe for negotiations, requested an interruption of the negotiations in order to try again to reach an agreement with Russia. When these remained fruitless and the British threatened to break off the negotiations due to the two-pronged way of negotiation by the Japanese, Ambassador Hayashi hastily resumed them in early 1902.

Contents of the 1902 Treaty

Articles 2 and 3 stipulated that Great Britain would not have to intervene on the Japanese side in a possible war against Russia if it were triggered by the Korean question. In return, Japan had no liability whatsoever if the British were threatened in India or waged a war in China.

The core of the treaty was Article 3: only in the event of war one of the alliance partners with more than one power required military assistance. Because of this arrangement, Japan could be sure that not a single power could support Russia without having to wage war not only with Japan but also with England. England, on the other hand, was not forced to intervene when Japan and Russia fought alone.

Although the contract was written as clearly as possible and translated into both languages, the two sides understood it slightly differently. The British saw it as a slight warning to Russia, while Japan was encouraged to act more aggressively against it. Some representatives of both nations therefore saw the treaty only as a safeguard for imperialist ambitions.

The alliance contract was renewed and expanded twice. The first expansion in 1905 was dominated by the Russo-Japanese War and aimed at preventing any Russian thoughts of revenge. Negotiations began in March 1905, before the decisive naval battle at Tsushima , and were concluded in August, before the Treaty of Portsmouth . The main changes were:

The precise provisions on the deployment of Japanese troops in India, which were temporarily discussed, were not included in the final version of the treaty.

The often invoked danger of a Russian attack on India was largely eliminated by the Anglo-Russian Convention of 1907. At around the same time, Japan also signed treaties with the other two powers of the Triple Entente , which brought about a balance of interests with them.

The alliance was renewed prematurely in 1911 after the American proposal for an arbitration treaty with Great Britain had triggered fears in Japan that Great Britain would not continue the alliance with Japan under these conditions. Japan therefore agreed to the inclusion of a clause according to which the existence of such an arbitration agreement released the contracting party from its obligations. This enabled Japan to prevent its threatened isolation. In addition, it signed a new customs treaty with Great Britain that restored its customs autonomy. Great Britain and the Empire, which had been consulted about the extension for the first time, linked the extension with the interest of preventing an independent Japanese power politics in the Pacific, possibly combined with a German-Japanese rapprochement. In fact, although not contractually obliged to do so, Japan entered the war against Germany on the side of Great Britain in 1914. The treaty had already made it possible for the British to strengthen their battle fleet in their home waters by withdrawing units from East Asia.

The alliance was first made public on February 12, 1902. In reaction to this, Russia, feeling threatened, tried to form an alliance with France and Germany, but this was rejected by the German side. Therefore, on March 16, only one reciprocal treaty was signed between Russia and France. Due to the content of the Anglo-Japanese treaty, however, France was unable to come to the aid of Russia directly in the event of war, as the theater of war would be in Central and East Asia. This became evident as early as 1904 in the Russo-Japanese War , in which France would only have had the option of declaring war on Great Britain in Europe, which would not have improved the Russian situation in East Asia.

China and the United States strictly opposed the Anglo-Japanese alliance.

The alliance gave Japan legal grounds to enter World War I on the Allied side and occupy the German possession of Tsingtao in China in 1914. Japanese officers on British battleships also took part in the 1916 Skagerrak Battle . From 1917 Japanese warships were moved to the Mediterranean , where they were supposed to protect Allied ships from enemy submarine attacks. The treaty occupation of the German colonial possessions in the South Seas meant a great boost for Japan's imperialist ambitions.

In addition, the alliance initiated a cultural exchange between the two countries. Japanese were sent to the UK to study while the now more publicized Japanese culture influenced many British artists such as Aubrey Beardsley .

Fall of the Alliance

On July 8, 1920, both sides declared that the treaty could not be fully in accordance with the letter on the agreement (of the League of Nations), which both sides intended to respect .

Another sign of the decline of the alliance was the 1921 Reich Conference in London, at which the leaders of the Commonwealth of Nations decided on a jointly coordinated foreign policy. One of the main themes of the conference was a possible further extension of the alliance between Great Britain and Japan. Initially, only Canadian Prime Minister Arthur Meighen explicitly opposed an extension of the contract. The Australians, on the other hand, feared the Japanese as direct competition in the region and that they could lose their importance for the Commonwealth. They also argued that the US would not play a special role in the Pacific with its isolationist foreign policy and that the Commonwealth would have to build up its own strong forces in the area, since the Japanese could not feel bound to the alliance due to the lack of threats. Meighen then argued that the Commonwealth should withdraw immediately from the alliance because of the possibility of being drawn into a Japanese-American conflict. The Americans feared at the time that the markets in the Pacific could orient themselves towards Japan after a renewal of the alliance, the strength of which, particularly in China, would undoubtedly increase. These fears have been spread in both the US and Canadian media and linked to reports of alleged secret clauses. Due to these developments, the conference decided not to seek an extension of the alliance. The conference then informed the League of Nations that they were willing to leave the Alliance, whereupon they warned that the agreed twelve-month deadline for the leaving nation must be observed.

The conference had decided to sacrifice the alliance in favor of good relations with the United States, but feared that Japan might subsequently ally with Germany or Russia. As a result, several delegates to the conference persuaded the United States to invite several nations to discuss the distribution of power in East Asia and the Pacific. Japan took part in the Washington Naval Conference, but was now deeply suspicious of the British and their intentions. They took part primarily to prevent a possible war with the United States. One result of the conference was the conclusion of a four-power treaty between the United States, Great Britain, Japan and France, which included mutual respect for the Pacific possessions of the contracting parties. Article IV of the treaty stipulated that the Anglo-Japanese treaty of 1911 should expire upon ratification by all parties. The Anglo-Japanese alliance thus ended on August 17, 1923.

The Japanese people's increased distrust of Great Britain as a result of the termination of the treaty is cited by many researchers as one of the reasons that led to Japan starting the Pacific War .