The Taitung County ( Chinese  台東縣 , Pinyin Taidong Xiàn , Tongyong Pinyin Taidong Sian , W.-G. T`ai Hsien-tung , PEH OE jī Tâi-tang koan ) is a district of the Republic of China on Taiwan . It is located in the southeast of the island of Taiwan and is bordered by Pingtung County in the southwest, Kaohsiung City in the northwest, Hualien County in the north and the Pacific Ocean in the east. Its capital is the city of Taitung .

Taitung County covers the southern part of Taiwan's east coast with 166 km of coastline. North of the capital Taitung, the Haian Mountains , which run parallel to the coast, are up to 1682 m high . Further to the west is the Huatung Graben , which also runs parallel to the coast . The western part of the county belongs to the central mountain range of Taiwan (the Chungyang Mountains). There lies the 3686 m high Guanshan (關 山), which belongs to the Yushan National Park and is the highest point in the district, on the north-western boundary of the district. In terms of area, Taitung County is the third largest county in Taiwan after Hualien and Nantou .

The Taitung district also includes the Pacific islands of Lü Dao ("Green Island") and Lan Yu ("Orchid Island"), some 30 and 60 km off the coast . 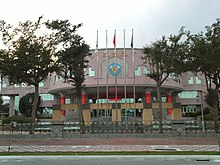 Building of the district council

The south-east of Taiwan was not settled by Chinese immigrants until the late 19th century - later than other regions of the island - due to its location facing away from the mainland and separated from the plains of western Taiwan by high mountains. With 66 inhabitants per km², the Taitung district, which is remote from a traffic point of view and largely consists of mountains, is still the most sparsely populated district in the Republic of China. Although the county makes up almost 10 percent of the total area of ​​Taiwan, less than 1 percent of the population live here.

In addition to the descendants of the Chinese immigrants, it is home to members of the indigenous peoples of the Bunun , Paiwan , Rukai , Amis , Beinan , Tau and Gamalan . According to official statistics, around 35.9 percent of the population belonged to the indigenous population in 2016 - the highest percentage among counties and cities in Taiwan. In terms of language use, the following languages ​​were spoken at home (2010): Standard Chinese 89.9%, Taiwanese 65.9%, Hakka 5.4%, indigenous languages 21.3%, other 5.5%. Mandarin is often spoken as a second language.

There are traces of human settlement in the district that go back around 10,000 years. The prehistoric sites at Baxiandong (八仙洞 遺址) and in the Beinan district of Taitung are among the most important in Taiwan. The first human inhabitants in historical times were members of the Austronesian indigenous peoples of Taiwan. As early as the first millennium AD there were sporadic contacts between the island of Taiwan and mainland China. However, a larger number of immigrants from the mainland first poured into the island during the Dutch colonial period (1624 to 1662). However, the Han Chinese immigrants initially settled almost exclusively on the west coast of Taiwan. The Dutch East India Company explored the east coast of Taiwan in search of gold, but did not establish any permanent large fortified settlements there. This remained the case even after the beginning of Chinese rule over Taiwan at the end of the 17th century. It was not until the second half of the 19th century that the Chinese administration began to penetrate the country more intensively, so that more and more Han Chinese also settled on the east coast of Taiwan. In 1867 there was an American punitive expedition to Formosa and in 1874 a Japanese punitive expedition in the area of ​​what is now Taitung County, after American and Japanese shipwrecked people were killed by Taiwanese natives. During the time of the Japanese rule over Taiwan (1895 to 1945), infrastructure and agriculture were promoted and smaller industrial companies emerged. The Japanese administration also pacified the warring tribes inland using military and police means and the area was organized as Taitō Prefecture . After 1945, Taiwan came under the administration of the Republic of China and the prefecture became Taitung County.

The self-governing body of the district is the district council of Taitung ( 臺東縣 議會 , Táidōng Xiàn Yìhuì ), which consists of 30 members, who are each elected for 4 years. The last election took place in 2014, with the Kuomintang winning the majority of the seats. In Taitung County, the Kuomintang has traditionally held a strong position in elections. The directly elected district administrator ( 縣長 , Xiàn Cháng , English magistrate ) has been Huang Chien-ting (“Justin” Huang, 黃健庭 , KMT) since 2009 (with re-election in 2014 ).

The district is strongly characterized by agriculture. The following table gives an overview of the agricultural products of the district.

Taitung County has international partnership agreements with the following locations:

Administrative division of the Republic of China (Taiwan)