Cotonou [ kɔtɔˈnu ] is the capital in the West African Benin and is the economic center as well as the seat of government of the country. The capital is however Porto-Novo , where the parliament has its seat. The city forms the Littoral department .

Parts of this article seem out of date as of 2013 .
Please help to research and insert the missing information .

The town's name is derived from Cotonou Ku Tonu , which in the language of the Fon about mouth of the river of death means. It was originally a in a lagoon situated fishing village and developed over time as a transit place for the overseas trade of the kings of Dahomey .

Cotonou belonged to the Dahomey Kingdom in the 18th century . In 1851, France signed an agreement with King Gézo at home that allowed him to set up a trading post in Cotonou. In 1883 the French navy occupied the city to prevent Britain from conquering the area.

On June 26, 1883, an Apostolic Prefecture of the Roman Catholic Church was established in Cotonou , which was elevated to the Archbishopric of Cotonou in 1955 . The episcopal church is the Cathédrale Notre-Dame-de-Miséricorde .

On June 23, 2000, the Cotonou Agreement was signed in Cotonou , which, following the Lomé Agreement, regulates the relationship between the European Community and the ACP countries , 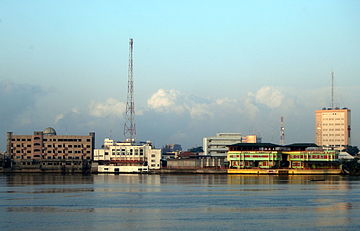 Cotonous airport , road and rail links make it the central transportation hub in the country. The port of Cotonou is the largest port in the country and one of the most important in all of West Africa. A large part of the goods transport for the landlocked countries Niger and Burkina Faso runs through it .

Cotonou is the economic capital of Benin and, above all, an important trading center due to the port . a. for goods to Burkina Faso , Mali and Niger . The city experienced a boom as a result of the civil war in the Ivory Coast , as a lot of trade moved away from Abidjan , the seat of government of the Ivory Coast .

Produced palm oil , beer , textiles and cement , as well as motor vehicles and bicycles , and there are sawmills in the city. Petroleum products , bauxite and iron are exported . Oil is being drilled off the coast.

In a ranking of cities according to their quality of life, Cotonou was ranked 182nd out of 231 cities worldwide in 2018.

The football club Energie Sport FC played in the Benin Premier League for several years in the late 1990s .

Sister towns of Cotonou are