The title of this article is ambiguous. Further meanings are listed under Quanzhou (disambiguation) .

Quanzhou ( Chinese  泉州市 , Pinyin Quánzhōu shì ; obsolete n. Post Chinchew , short: 泉 , Quán , 鲤 , Lǐ ) is a district-free city in the southeast Chinese province of Fujian . The administrative area of ​​Quanzhou has an area of ​​11,244 km² and a population of 7.86 million (2010). The city had one of the most important ports in the world during the Yuan Dynasty . Marco Polo and Ibn Battuta are among the city's most famous visitors . 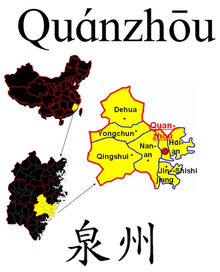 At the county level, the city of Quanzhou consists of four urban districts, three independent cities and four counties. They are:

Quanzhou is located near the junction of the Jin Jiang and Taiwan Straits in southern Fujian Province. The city has a very mild climate with average annual temperatures of 15 to 21 degrees Celsius.

Under the name Zaytoun , also Zaytun or Zaitun , ( 刺桐 城 , Cìtóng Chéng ), which was derived from the Chinese tree name Citong for the many Indian coral trees in the area, Quanzhou was an important trading port as early as the fifth century. From here was silk exports to the Arab world and the name of the city was in Arabic to the term for silk with satin weave : atlas zaytuni "silk Zaytun". This word gets into German as satin through Spanish and French mediation .

Its importance reached its peak in the thirteenth century, when the Silk Road had become too unsafe due to numerous wars and robberies and the Silk Road of the Seas was therefore preferred. The Quanzhou ship's discovery testifies to the brisk trading activity during the Song Dynasty . Many Arab and Persian merchants lived in the city during the Song and Yuan dynasties . There were trade routes to Africa and Arabia in the west and to what is now Indonesia . There are also theories that the Quanzhouse Arabs brought Chinese inventions such as gunpowder and printing to the West and thus to Europe .

In the Ming and Qing dynasties , the port slowly fell into disrepair, not least because of the sea ​​trade ban that existed for a time. The overpopulated city was affected by numerous waves of emigration to Southeast Asia and Taiwan .

Quanzhou is the city with the greatest economic power among the prefecture-level cities of Fujian. Quanzhou is an important stone cutting center and in the area around the city there are quarries as well as countless companies that are involved in the production of memorial plaques, statues or just beautiful stones. Tiles with which many houses in China are clad on the outside are also made. As a result, Quanzhou and the surrounding area are exposed to very high levels of dust.

Quanzhou has a newly built airport about 20 km east of the city. But it only has a few domestic connections.

Quanzhou is about a two- hour drive north of Xiamen City and a 4-5 hour drive south of Fuzhou City , both with international airports. There are frequent bus connections from both cities. There are also long-distance buses to many other cities in China.

Quanzhou has had a train station since 2010, which serves China's high-speed rail network. There are direct connections to Xiamen, Fuzhou, Nanjing and Shanghai, among others.