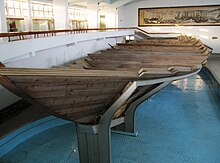 The Quanzhou Ship ( Chinese  泉州 古船 , Pinyin Quánzhōu gǔchuán  - "Ancient Ship of Quanzhou") is the wreck of an ocean- going merchant ship from the late Southern Song Dynasty ( 南宋 , Nán Sòng ), which was found in the port of Quanzhou . It represents one of the most important archaeological ship finds in China . The ship is in a museum on the grounds of the Kaiyuan Temple ( 開元 寺  /  开元 寺 , Kāiyuán Sì) as a branch of the Quanzhou Marine Museum and can be visited.

At the time of the Southern Song ( 南宋 ) 1126–1279 AD, China was a centrally controlled official state with a pronounced urban culture and great importance for trade. It was in constant defensive struggle against northern horsemen ( Xixia , Liao and Jin ), followed by a concentration on southern China. However, it was also a time of great innovations and inventions, both military and civil, such as the compass . This concentration went hand in hand with the increase in importance of the navy and maritime trade. China now had an efficient deep-sea navy and inland shipping.

Quanzhou ( 泉州 ) was the main port city in China during the Song Dynasty. It was at the center of an international maritime trade network with direct connections to Arabia. Archaeological finds prove the presence of numerous peoples and religions in the city ( Christians , Daoists , Muslims , Buddhists , Manichaeans and Hindus ).

The preserved hull has a keel , twelve bulkheads and solid planking . The side walls consist of a complex two- to three-layer planking that forms clinker-like steps.

The keel ( 龍骨  /  龙骨 , lónggǔ  - "dragon frame ") was in three parts: Front keel (made from camphor tree); Main keel (made from Chinese pine); rear keel (made of camphor tree). The keel segments were joined by a scarf joint of tabs with wooden pegs. There were recesses with seven coins and a bronze mirror between the middle and rear keel, this is based on a traditional Chinese shipbuilding tradition (Bao shou kong).

The transom consisted of three heavy beams. Originally it still had a light single-layer wood paneling. One beam is provided with a large, round recess that received the oar that was not preserved .

The ship has two mast tracks , a smaller mast track at the first bulkhead and a larger mast track to accommodate the main mast. The mast tracks each have two depressions, one on the left and one on the right of the center. In them there were probably pieces of wood that were connected to the mast and thus fixed it.

The planking was carried out in a complex "folded clinker brick and folded crab" construction method. It has both flush transitions and clinker-like steps. Furthermore, the planking has different thicknesses: starting from the keel, first two-layer, then three-layer planking (the inner main planks are protected by outer ones). The planks of a plank corridor were connected to one another by straps and the plank corridors were interlocked by folding. The individual layers and planks were firmly connected by iron nails , which were provided with a waterproof protective varnish, which were knocked at an angle from the upper outer plank to the lower and inner plank. The nails were made in proto-industrial sites in the Quanzhou area.

Camphor tree was used for the outer planks and a spike fir for the inner planks .

The Quanzhou ship had a total of 12 bulkheads. They consisted of several boards placed one on top of the other, which were firmly and closely connected by metal clips and additionally secured with wooden longitudinal stiffeners. The transition to the planking is seamless due to the very careful preparation of the gravel edges. The bulkheads were connected to the planking with nails and L-shaped metal straps (guaju). The material chosen for the bulkheads was a spit fir.

The cargo consisted mainly of timber and porcelain produced for export .