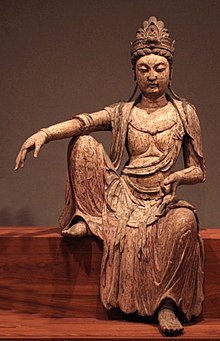 The goddess Guanyin , the Chinese variant of the Bodhisattva Avalokiteshvara ( Song dynasty , around 1025)

The Buddhism was first to the era after China brought, but could not spread at that time due to lack of written tradition. Even the first translations of Buddhist scriptures into Chinese in the 2nd century did not lead to the spread of Buddhism. Some of these translations were mixed up with Daoist terms and thus falsified. In China there was an intellectual examination of Buddhist scriptures for the first time from the 3rd century. However, this was initially limited to the ruling elites and did not reach the common population. With 244 million followers in 2010, about half of all Buddhists worldwide lived in China.

It was not until the beginning of the Tang dynasty that Buddhism became widespread in China in the 7th century. The early rulers of this dynasty sent Buddhist monks to India a century earlier to bring Buddhist scriptures to China and to translate Buddhist texts from India into Chinese.

This reintroduction of Buddhist teachings led to the blossoming of various Buddhist-influenced philosophies. The philosophies are all close to the Mahayana from which the great Chinese schools of Buddhism later developed.

Tian-tai (T'ien-t'ai;), also called Tiantai zong (天臺 宗) after its ancestral monastery , was founded around the year 550. The ancestral monastery on Mount Tian-tai was founded by Hui-se (慧思; AD 515- AD 567) and this school based its teaching system on the Lotus Sutra . The Tiantai School tried to unite all the philosophical schools of Buddhism. Meditation and study of Buddhist teachings were of great importance. The Tiantai School was later transferred to Japan, where it has established itself as an independent Buddhist school under the name Tendai .

Huayan (華嚴 宗), also known as the Hua-Yen School of the Flower Garland (School of the Avatamsaka Sutra ), originated between the years AD 650 and AD 750. The focus of this school was on the study of Buddhist philosophy. The core of the philosophical teaching of this school lies in the teaching of interdependence and interpenetration of all phenomena . On this basis, the masters of Huayan developed a highly differentiated metaphysical teaching system that influenced all other Chinese Buddhist schools.

In Chinese Chan (Ch'an; 禪宗), in contrast to the schools mentioned above, the direct experience of things as they are and less the study of Buddhist philosophy was of importance. Therefore, meditation has a particularly high priority in this school, as only this can enable access to the realization of ultimate reality.

The School of the Indian monk was established Bodhidharma (菩提達摩) around 523 n. Chr. In the in the northern Chinese province of Henan situated Shaolin Monastery (少林寺). Chan developed less monastic structures than Tientai and Huayan. The focus of this school was on the ideal of the wandering monk. In Korea the Seon School was formed from Chan and the Thien School in Vietnam . Chan Buddhism was later transferred to Japan and established there as Zen . 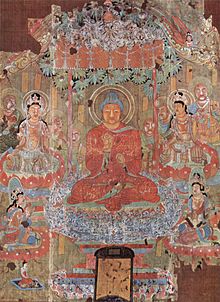 The various schools of the Pure Land (Jingtu zong; 淨土 宗) are based on the Pure Land Sutra . According to this sutra, it is important to call on Buddhas and Bodhisattvas as help on the path to enlightenment , since the age in which the Pure Land Schools arose and the later ages are too much in decline for practitioners to do on their own To attain enlightenment. Buddhas and Bodhisattvas reside in so-called pure lands , pure areas that are particularly beneficial for spiritual development. Through the repeated invocation of the Buddhas and Bodhisattvas, for example the Buddha Amituofo (阿彌陀佛, āmítuó fó, Amitabha - Buddha of limitless light), one lays the foundation for being reborn after death in his pure land of Sukhavati . Since meditation is less important in this school than in the Chan, for example, this school direction spread among the broad sections of the working population. The Pure Land School established itself in Japan and was spread there by Honen Shonin (1133-1212) and his student Shinran.

With the Mizong (密宗), Indian Vajrayana Buddhism (a supplement to Mahayana with esoteric methods) was introduced from Central Asia to China in the late 8th century . From China, this form of Buddhism came to Japan in the 9th century and was known there as the Shingon School.

Oppression and Reconstruction in the 20th Century

Over the centuries, Buddhism in China was in decline. The revolutionary upheavals of the 20th century, marked above all by the establishment of the Communist People's Republic of China in 1949, pushed the influence of Buddhism back further. Despite the establishment of the Chinese Buddhist Society, initially tolerated by the state, in 1953, the cultural revolution proclaimed by Mao Zedong ultimately aimed directly at the destruction of the remaining symbols and organizations of the religious traditions of China. Numerous monasteries were destroyed, the majority of the public religious practice was banned, monks expelled, arrested or killed.

Beginning in the 1980s, the CCP adopted a more liberal approach to the religious movements. In connection with the re-establishment of the Chinese Buddhist Society , more monasteries and temples could be rebuilt and the number of ordained monks and nuns grew. Buddhism is also spreading again among the people.

By the beginning of the 21st century, there are about 100 million practicing Buddhists in China, about 20,000 temples and monasteries with 200,000 monks and nuns. In 2006 there were 34 Buddhist schools in China.

On the current legal status and Chinese policy towards religions:

Main article: Religion in the People's Republic of China