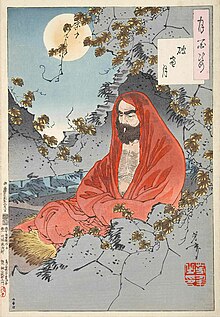 Daruma - lucky charm, armless and legless due to the legend that Bodhidharma's limbs fell off through years of motionless sitting

Bodhidharma (* around 440 ; † around 528 ) ( Chinese  菩提 達摩 , Pinyin Pútídámó or Damo 達摩 for short , Japanese Bodai-Daruma or Daruma) was a Buddhist monk and is considered the first patriarch of the Chan and Zen lines. His historicity is partially certain, but the historical details are in the dark, as the legend came about a few centuries after his death and has been embellished more and more.

In 480 AD he left his country ( India ) and went to China, crossed the Himalayas to the northern provinces, migrated first to southern China and then to the imperial court of the Liang Dynasty . He then settled again in the north in Henan Province in 523 AD . There was also the Shaolin Monastery, which is still active today , where, according to legend, he taught a philosophy of self -reflection derived from Mahayana Buddhism and developed Chan Buddhism with the monks of the monastery . In Chinese chronicles he was referred to as the "blue-eyed barbarian / non-Chinese". From there this teaching made its way to Korea ( Kor. Son ), Vietnam ( Vietnam . Thien ) and Japan ( Japanese Zen ), from where it became known in the West as Zen Buddhism from the 19th century.

According to legend, it was in this monastery that he laid the nucleus of some Chinese martial arts. That at that time Taoist embossed Shaolin Temple experienced the combination of meditation practices of Chan / Zen and körperertüchtigenden movements Xǐsuǐjīng ( Chinese  洗髓經 ) and Yijinjing ( Chinese  易筋經 ). The later Shaolin martial art and the form Shiba luohan shou ( Chinese  十八 羅漢 手  - "The 18 hands of the Arhats ") emerged from these movements . In contrast to his Shaolin successors, however, he only taught martial arts as a complementary discipline to achieve enlightenment ( Japanese satori ; Chinese  悟 , pinyin wù ; skt. Bodhi ).

Bodhidharma and the tea

According to a legend, Bodhidharma created the tea plant . While he was meditating in a cave, his eyes became heavy. In order not to fall asleep, he tore off his eyelids and threw them away. At the point where they landed, the first tea bush had grown, which also explains the shape of the leaves.

Development of the Bodhidharma legend

The above hagiographic representation of Bodhidharma's life as it knows the Zen tradition has developed over several centuries. The respective events can be found for the first time in the literature in the following years:

645: Description as a Buddhist blue-eyed hairy monk of Persian origin.

667: Passes the Lankavatara Sutra on to Huike .

approx. 710: Associated with the Shaolin temple. Legend has it that his future successor Huike cut off his arm to demonstrate the seriousness of his desire for instruction.

approx. 715: Is described as the third son of a South Indian Brahmin king. Identified as the second patriarch after Gunabhadra .

730: Story of meeting Emperor Wu von Liang . Is said to have finally transferred the teaching to Huike.

approx. 758: First referred to as the "first patriarch". Passing on the Diamond Sutra to Huike.

801: Recitation of the transmission verse at the death camp.

952: Dialogue with Huike about "calming the mind".

988: Said to have sat meditating with a view of the wall.

c. 1200: Relics from the cremated body are venerated by the Japanese Daruma-shū .

1224: Nine years meditating with a view of the wall.