Miriam Makeba was born as a child of the domestic help and healer Zenzi Makeba, a Swazi , and of the teacher Caswell Makeba, a Xhosa . She was the youngest child and had three sisters and a brother. Her birthplace, Prospect Township, was an inner-city slum in eastern Johannesburg that was demolished in 1936. A few weeks after her birth, her mother had to serve a six-month prison sentence, so Miriam Makeba also spent this time in prison. Her father died when she was six years old. Makeba attended Kilnerton Training Institute, a primary school in Pretoria , for eight years , where she also sang in the choir. After attending school, like her mother, she worked as a domestic help for white people . In 1949 she married her childhood friend James "Gooli" Kubay and in 1950 gave birth to their only daughter, Bongi Makeba . The marriage was divorced the following year.

Miriam Makeba began her musical career as a singer in the groups Cuban Brothers and Manhattan Brothers , with whom she recorded her first single as a soloist in 1953, Lakutshona Ilanga. After touring with Dorothy Masuka , Dolly Rathebe and Lionel Pillay in Alf Herbert's show African Jazz and Variety (probably 1954) , she performed again with the Manhattan Brothers in 1955 . The first recordings were made under his own name. In 1956 she founded the singing group The Skylarks (German about: "Die Lerchen"), which consisted only of women; first recordings were made (still as The Sunbeams ) with her half-sister Mizpah and Johanna Radebe; Since 1957 she has appeared in a quartet with the Skylarks (soon with Mummy Girl Nketle, Mary Rabotapi and Abigail Kubeka).

In 1959 she married the jazz singer Sonny Pillay of Indian origin. In the same year she was the leading actress in the successful musical King Kong . The jazz musician Hugh Masekela was also engaged there. Also in 1959 she played a small role as the Shebeen singer in Lionel Rogozin's anti- apartheid film Come Back, Africa , which attracted international attention.

Makeba was a result of their film appearance at the premiere of the film to the International Film Festival of Venice invited. She then appeared on the Steve Allen Show , a television show in the United States . Shortly after she brought her daughter to the United States, her mother died. The South African authorities denied her entry to the funeral. Harry Belafonte helped her move to the United States and made her first appearances in Los Angeles and New York . This started her world career. Makeba's greatest international musical success is the song Pata Pata (1967) written on isiXhosa . This song made it to number 12 in the US charts and to number 14 in the German charts. Her other well-known songs include The Click Song , Malaika, Soweto Blues and a version of Mbube (The Lion Sleeps Tonight), which she performed at the celebration of John F. Kennedy's 45th birthday in Madison Square Garden on May 19, 1962 sang. In 1963 she addressed the United Nations General Assembly for the first time and called for a boycott of the South African apartheid regime. As a result, the South African government revoked her citizenship; their records were banned in South Africa. From 1964 to 1966 she was married to Hugh Masekela, with whom she also performed together. In 1968 she married civil rights activist and Black Panther activist Stokely Carmichael . They were then monitored by the FBI ; the record and tour contracts were terminated, so that the couple emigrated to Guinea , where Makeba had already been granted citizenship in 1963 after being expatriated from South Africa.

There Miriam Makeba and her husband became good friends of President Ahmed Sékou Touré and his wife. In addition to Guinean citizenship, Makeba also received Algerian citizenship. In autumn 1974 she performed with James Brown , BB King , The Spinners and The Crusaders at a major concert in Kinshasa in Zaire, Africa . It was part of the supporting program for the historic Rumble in the Jungle boxing match between George Foreman and Muhammad Ali .

In 1978 Makeba and Carmichael were divorced. Miriam Makeba then became the second wife of Bageot Bah, a Belgian Muslim who was an airline employee. Bongi Makeba died in Guinea in 1985 , after which Miriam Makeba moved to Brussels . In 1987 she accompanied Paul Simon worldwide on his Graceland tour and sang with him in the duo Under African Skies (documented in Zimbabwe ). In 1988 she performed with Hugh Masekela at the Nelson Mandela 70th Birthday Tribute Concert in London.

After three decades of exile in the USA, Guinea and Belgium, she returned to South Africa in June 1990, at Nelson Mandela's request , and from December 1990 lived again in Johannesburg. 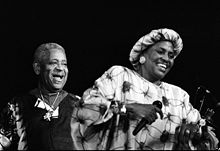 In 1991 she went on tour with the jazz trumpeter Dizzy Gillespie , in 1992 she was at the side of Whoopi Goldberg in the film adaptation of the musical Sarafina! to see. She has been named South Africa's Goodwill Ambassador to the United Nations. In 2004 she founded the ZF Makeba Trust to safeguard her legacy. This trust includes the Miriam Makeba Rehabilitation Center for Abused Girls, which offers protection to abused girls. On September 26, 2005, Miriam Makeba announced her departure from the stage. One last world tour took her through the USA, Cuba, Brazil, Venezuela, Scandinavia and Germany. On May 25, 2006 Miriam Makeba gave her last concert in Germany at the 18th Africa Festival in Würzburg.

On November 9th, 2008 Miriam Makeba performed at a benefit concert for the writer and journalist Roberto Saviano, who was threatened by the Camorra , in Castel Volturno , Italy. Shortly after her performance, she suffered a heart attack and died in hospital early in the morning on November 10th. Their ashes were given to the sea.

Makeba's songs contain elements of traditional music from southern Africa, but also western pop, jazz and folk music. With Mas que nada , for example , she also interpreted Brazilian songs. Mostly she sang in English or isiXhosa , but also in other South African languages; in Malaika she sings in Swahili . According to Jon Pareles of the New York Times, her voice could sound “light, warbling and girlish”, but also “flirtatious, bluesy or extremely exuberant”. In addition, the same critic heard "a layer of unsmoothed, sharper exhortations, the tone of village songs and evocations".

In 1987 Miriam Makeba wrote the book together with the American James Hall: