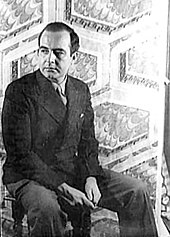 Barber began composing at the age of seven. When he was nine, he stated in a message to his mother:

“[…] My destiny is to be a composer and I am sure that I will. I would like to ask you one more thing: don't ask me to forget about this unpleasant thing and go play football! [...] "

The popularity of the Adagio has outshone the rest of the composer's work. However, he is considered one of the most talented American composers of the 20th century. He avoided the experimentalism of some other composers of his generation and preferred relatively traditional harmonies and forms. His work is melodious and has often been described as the neo-romantic period in music. None of his other works came close to the popularity of the Adagio , but some are still performed and recorded.

In addition to the Adagio for Strings , his best-known work is the opera Vanessa based on a libretto by Gian Carlo Menotti , premiered on January 15, 1958 at the Metropolitan Opera in New York. Gian Carlo Menotti also wrote the libretto for Samuel Barber's nine-minute short opera A Hand of Bridge (1959).

The new Met in Lincoln Center was inaugurated on September 16, 1966 with the premiere of his opera based on the tragedy of the same name by William Shakespeare , Antonius und Cleopatra .

Of his piano compositions, the Sonata op.26 is the most important, not only because it is his only engagement with twelve-tone music, but also because of its enormous difficulties for the pianist  - especially in the one at the request of Vladimir Horowitz (who wrote this Sonata premiered on December 9, 1949) added four-part final fugue on a theme peppered with numerous intermittent jumps at a rapid pace .