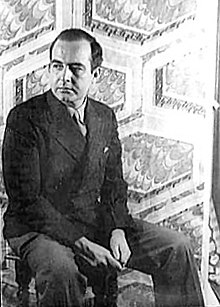 Adagio for Strings is a piece for string orchestra composed by Samuel Barber in 1938.

It is an arrangement of the second movement of his string quartet String Quartet op. 11 from 1936, which he composed during a study visit to Lake Wolfgang near Salzburg . The world premiere of the Adagio took place on November 5, 1938 under Arturo Toscanini with the NBC Symphony Orchestra in New York . In 1967 Barber created a version for eight-part choir , Agnus Dei , as a setting of Agnus Dei .

The work is considered Samuel Barber's most popular composition. In 2004, Adagio for Strings was voted "Saddest Classical Piece" by BBC listeners . Barber himself, however, did not take pleasure in the fact that the Adagio overshadowed his other compositional work in its popularity.

Due to its emotional intensity, the work has been used several times as film music , for the first time in Der Elefantenmensch (1980). Better known, however, is its repeated occurrence as the theme music in the anti-war film Platoon . In The Fabulous World of Amélie , the sentence can be heard in the scene in which Amélie Poulain watches her sad life on television. The piece can also be found in Sophie Scholl - The Last Days as well as in The Scarlet Letter (1995) , Ma Mère (2004), Lorenzo's Oil (1992) , Reconstruction (2003) and Saving Private Ryan (1998) .

Cover versions and remixes in the field of electronic dance music

In 2004 a remix by Tiësto was released, which was even more successful than the already successful remix by William Orbit. On August 13, 2004, Tiësto used the piece as part of a live performance to provide musical accompaniment to the entry of the athletes on the occasion of the opening of the Athens Olympic Games . There is also a hardstyle version of the piece entitled Remember, Remember by Brennan Heart . A version by Lucas & Steve was also released in 2018 .

In 1997, Puff Daddy used the beginning of Agnus Dei , the choral version of the Adagio , as the intro for his cover I'll Be Missing You of The Police's hit Every Breath You Take .

The real-time strategy game Homeworld , developed by Relic Entertainment in 1999 and sold by Sierra Entertainment , uses a version sung by the choir in the intro, which then accompanies the player during several missions.

In December 1999 the piece was published in a version edited by William Orbit . Ferry Corsten's remix also became famous . The single CD also contained a remix by the German DJ André Tanneberger (ATB) .

In 2000 the Adagio was played as the intro to the concerts of the British band " The Cure " during the "Dream Tour" for the album "Bloodflowers".

The work is played more often in the television series The Simpsons : when Marge Simpson rioted in Moe's tavern (season 14, episode 9 - "The strong arms of Marge"), when Lisa watched a DVD (season 18, episode 17 - "Marge Online") ) and shortly before Milhouse is mistakenly delivered the news of the death of his parents (Season 19, Episode 6 - "Little Orphan Milhouse").

In the television series How I Met Your Mother, the piece underlines the bad outcome of a drinking game (season 5, episode 13 - "Jenkins") and Barney's penultimate slap from Marshall (season 9, episode 14 - "Slapsgiving 3: Slappointment in Slapmarra").

In the television series American Dad , the work occurs when Steve and Stan escape a war simulation (Vietnam War) after Steve freed his father (Season 5, Episode 1 - The Soldier Steve Smith).

In the song "Eternal Odyssey" from the album Chimera by the band Delerium , the theme appears in the background.