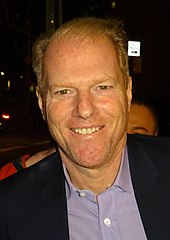 Noah Emmerich was born in 1965 as the son of the Jewish art gallery owner André Emmerich (1924–2007). Because of increasing anti-Semitism, his father's family had emigrated from Frankfurt am Main to Amsterdam in 1931 and finally to New York City in 1940 . Mother Constance Emmerich's family had Romanian-Hungarian roots. He has two older brothers: Adam and Toby Emmerich . The family is not related to the director Roland Emmerich .

Emmerich graduated from Yale University . During his studies he was a member of the a cappella group The Spizziwinks . After graduating in 1987, he initially sought a career as a lawyer. During his first courses in law school, he decided to drop out and become an actor. He got his first role through a friend who was directing a campus production of the musical Anything Goes . He finally came to California through a theater tour with Aaron Sorkin's play A Few Good Men , where he also appeared in front of the camera from 1993. With supporting roles in films such as Last Action Hero , Beautiful Girls and Cop Land , he recommended himself for further projects. He became known to a wider audience for his role as Truman's "best friend" Marlon on The Truman Show . Since his unnamed supporting roles in Gavin O'Connor's tragic comedy Tumbleweeds , Emmerich has worked repeatedly with the director who cast him in films such as Miracle , The Law of Honor , Warrior and Jane Got a Gun .

Around the turn of the millennium, Emmerich founded Sandbox Pictures, a visual effects company that was responsible for the trick technology at night in a museum or The Chronicles of Narnia: The King of Narnia .

In addition to his roles in movies, Emmerich also appeared in television series such as White Collar , The Walking Dead and Backwash . From 2013 to 2018 he played FBI agent Stan Beeman in 75 episodes of the agent series The Americans .

Emmerich also directed some episodes of the series The Americans and Billions .

His first marriage was from 1998 to 2003 with actress Melissa Fitzgerald . The actress and producer Mary Regency Boies has been his wife since 2014 .