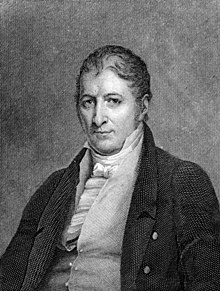 Eli Whitney (born December 8, 1765 in Westborough , Massachusetts , † January 8, 1825 in New Haven , Connecticut ) eldest son of Eli Whitney Senior, a successful farmer, was an American inventor and manufacturer and is considered to be the founder of the exchange building . He is also credited with developing the first cotton ginning machine (egrenier machine ) in 1793 . The gin was a mechanical device that separated the seeds from the cotton, a process that was extremely labor-intensive until then.

In 1792 he graduated from Yale University . He married Henrietta Edwards on January 6, 1817 and had four children with her.

Whitney's greatest contribution to American industry was the introduction of the interchange building and assembly line , which he first used to produce muskets for the US government . Whitney's factories then supplied 10,000 standardized muskets at a price of $ 13.40 each. He probably borrowed the idea for this manufacturing process from the French gunsmith Honoré Blanc . Whitney's concepts culminated in the “American system” of industrial production, ie the rational, mechanized production of interchangeable parts. These methods were later used in production by Henry Ford and others.

Some people claim that Catherine Littlefield Greene should be allowed to invent, or at least design, the gin. It is known that she was in contact with Eli Whitney; something other historical figures like George and Martha Washington did too, as he was a great inventor and person.

Although his ideas were inventive and useful, many others willfully copied the concepts and designs. The Whitneys company ran into serious trouble in 1797. He never patented his newer inventions, for example that of a milling machine.

By late 1790, Eli Whitney Jr. was in debt and was on the way to bankruptcy. In addition, his factory in New Haven burned down. The American government gave him another chance and signed a contract with him in 1798 for the delivery of 10,000 muskets. Whitney, who had never made weapons, developed the principle of standardized production of interchangeable parts and defended it until his death in 1825.

In 1818 he developed the first milling machine for metal. The machine bed (base body) consisted of a block of wood. The milling table could either be moved manually or automatically using a worm drive .

The company was continued until 1846 by his nephews Philos Blake and Eli Whitney Blake (1795-1886). Trustees were Henry W. Edwards and James Goodrich for a further eight years. After studying at Yale and Princeton and graduating in 1841, Eli Whitney Jr. returned to New Haven and took over his father's arms factory.

For Samuel Colt , who did not yet have his own production facilities, he manufactured the famous Colt Whitneyville Walker percussion revolver under contract in 1847 and became one of the most important arms suppliers in the American Civil War .