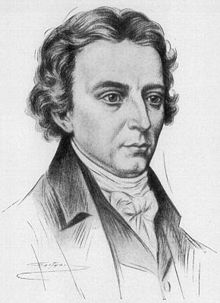 Robert Southey (born August 12, 1774 in Bristol , England , † March 21, 1843 in Keswick , England) was an English poet, historian and critic. He belongs to the " Sea School " (named after the Lake District in Cumberland) around William Wordsworth and Samuel Taylor Coleridge .

Southey, the son of a burlap merchant, attended Westminster School , but was expelled from it after four years because he published an article against the corporal punishment of students in the magazine he founded, The Flagellant . He studied theology at Balliol College at the University of Oxford without having the prospect of a Church office as a Unitarian . At a young age, Southey was downright rebellious and an avid supporter of the French Revolution , as evidenced by his poem Joan of Arc, written in 1792 . His radical views brought him together with Coleridge, and together they devised the plan to establish a commune in Pennsylvania . However, nothing came of this idea. Together with Coleridge, he wrote the drama The Fall of Robespierre in 1794 . At the end of 1795, Southey traveled to Portugal. The experiences of this trip seem to have dissuaded him from his radical political ideas. It was during this time that most of his poems that are still known today were written, for example the anti-war poem The Battle of Blenheim .

From 1800 to 1801 Southey was back in Portugal . During this time he finally changed to the conservative Tory , which should make him an enemy for the generation of younger romantics like Percy Bysshe Shelley and George Gordon Byron . Back in England, Southey lived at Greta Hall near Keswick in Cumberland. In the next few years he mainly wrote historical verses. In addition, he translated numerous works, including from French and Spanish. In 1807 Southey received a state pension, and in 1813 he became a "poet laureate", d. H. appointed official court poet of the royal family. Since 1839, unconscious as a result of paralysis, he died on March 21, 1843.