William Wordsworth (* 7. April 1770 in Cockermouth , UK ; † 23. April 1850 in Rydal Mount , Great Britain ) was a British poet and a leading member of the English Romantic movement , which he 1798 by along with Samuel Taylor Coleridge wrote Lyrical Ballads ( Lyrical Poems ) initiated. When his best known works of his early autobiographical poem are The Prelude ( Prelude ) from 1798 and the Daffodil poem I Wandered Lonely as a Cloud of 1804th

He was born the second of five children of a lawyer at Wordsworth House in the Lake District. His sister Dorothy Wordsworth , with whom he was closely connected and later lived together - even after his marriage - and with whom he went on several trips, later also published poems. His older brother Richard was a lawyer, his brother John a captain (he died in the shipwreck of his ship in 1805) and his brother Christopher clergyman and later a master's degree from Trinity College, Cambridge. After his mother's death in 1778 (his father died five years later), Wordsworth was sent to Hawkshead Grammar School and he then studied at Cambridge University (St. John's College) from 1787 to 1791 .

In his student days, Wordsworth was enthusiastic about the French Revolution and for this reason traveled to revolutionary France in 1790. In order to deepen his impressions, he made another trip through France, the Alps and Italy the following year. With the establishment of the reign of terror in France, however, Wordsworth's disappointment grew and he increasingly distanced himself from the aims of the revolution. His departure turned into opposition in 1798 when French troops conquered Wordsworth's valued Switzerland - from then on Wordsworth admitted to conservatism .

In Orléans in 1792 he also met Marie-Anne (Annette) Vallon, with whom he had a daughter Caroline, born in December 1792. Like her family, she was a royalist. Financial and other reasons prevented the marriage, at the end of 1792 he traveled to England again and due to the political events (declaration of war in February 1793) he was only able to travel to France much later. Both remained in correspondence, and Wordsworth met Anne Vallon and his daughter in Calais in 1802, two months before his marriage to Mary Hutchinson. Because of the new outbreak of war, they did not have contact again until 1814 (by letter via Wordsworth's sister Dorothy). In 1816 his daughter married under the name Wordsworth with the consent of her father.

In 1793 Wordsworth published his first poems with the collections An Evening Walk and Descriptive Sketches . In 1795 he became close friends with Samuel Taylor Coleridge; two years later he settled in its neighborhood. Together they published the Lyrical Ballads , which were important for English Romanticism in 1798 ; they contained some of the most famous works by the two poets, e.g. B. Wordsworth's Tintern Abbey and Coleridges Ancient Mariner . In the same year they went on a trip to Germany with Wordsworth's sister Dorothy. In Goslar , Wordsworth began work on his autobiographical poem, which later became known as The Prelude .

Back in England, he moved with his sister to Grasmere in his native Lake District , which is why he is counted among the so-called Lake Poets , together with Robert Southey and Coleridge, who temporarily lived in nearby Keswick (Cumbria) . In Grasmere, Wordsworth married his childhood friend Mary Hutchinson in 1802. With her he had five children, two of whom died in 1812. The marriage was made possible by £ 4,000 paid off by William Lowther, Earl of Lonsdale, as outstanding debt on Wordsworth's father.

For years, Wordsworth was planning a long philosophical poem in three parts to write, he The Recluse ( The Hermit ) wanted to call. In 1798/99 he had started with an autobiographical poem, which he never named, but referred to as a poem for Coleridge , and which was to form an appendix to the Hermit (later known as The Prelude ). In 1804 he began expanding it and making it a prologue rather than an appendix. He had completed the poem by 1805, but he did not want to publish such a personal poem until the entire hermit was complete. Leonardo da Vinci had already described the power of loneliness in similar words before him.

In 1813 Wordsworth moved to Rydal Mount , Ambleside , where he lived the rest of his life. The following year he released The Excursion as the second part of the three-part Hermit . However, he had not completed the first and third parts, which he would not succeed until the end of his life. Modern critics have noted a decline in Wordsworth's creativity from 1815 onwards. Around 1820, however, his reputation rose because contemporary critics assessed his early poems more positively.

Wordsworth remained a staunch supporter of the Church of England throughout his life . In 1843 Wordsworth was awarded the honorary title of Poet Laureate . On April 23, 1850, the poet died of pleurisy in Rydal Mount and was buried in the cemetery of St. Oswald's Church in Grasmere.

A few months after his death published Wordsworth's widow Mary his long autobiographical poem for Coleridge as The Prelude ( Prelude ). The work attracted little interest at the time, but is now regarded as Wordsworth's masterpiece.

In 1845 he was elected an Honorary Fellow of the Royal Society of Edinburgh .

TC Boyle prefixed his novel The Light (2019) with a quote from William Wordsworth as the motto.

Orhan Pamuk chose a line from a poem by William Wordsworth for his novel This Strangeness in Me (2014). 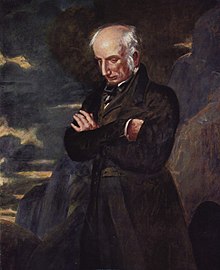