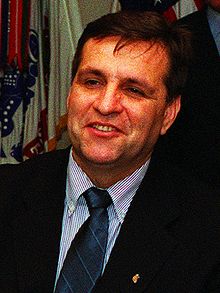 Boris Trajkovski ( Macedonian Борис Трајковски ; born June 25, 1956 in Strumica , Yugoslavia ; † February 26, 2004 near Stolac , Bosnia-Herzegovina ) was a Macedonian politician ( VMRO-DPMNE ) and from December 15, 1999 until his death, President of Macedonia .

Trajkovski was born in Strumica in 1956. He came from a Methodist, politically active family. His father Kiril was imprisoned for a few years because of his political and religious convictions, and Boris, after studying law at the University of Skopje from 1975–1980 , was moved by the communist government to a remote village because of his active membership in the Macedonian Evangelical Methodist Church banished. During this time, as a lay preacher, he took care of a community of the Roma , who are a discriminated minority in Macedonia and are among the poorest. He has represented Macedonia on several international Methodist bodies.

In 1991, after the breakup of Yugoslavia , he returned to public life. Until 1997 he headed the legal department of a construction company in Skopje . He was a member and at times also president of the Macedonian party VMRO-DPMNE , which, according to self -reports , follows a Christian Democratic tradition. In 1997 and 1998 he worked as an advisor to the Mayor of Skopje.

In 1998 he became State Secretary in the Macedonian Foreign Ministry and as such was responsible for the reception of hundreds of thousands of Kosovar refugees , mostly of Albanian origin, in Macedonia during the Kosovo war , and coordinated humanitarian aid for them.

In the presidential election on November 14, 1999, Trajkovski defeated his challenger Tito Petkovski with 52% of the vote versus 45%, supported by Muslims but viewed with skepticism by many Orthodox because of his Protestant denomination and by nationalists for his tolerance. Trajkovski was supposed to take office on November 19th . Objections to the election results delayed the start of business. Until the objections were rejected, Parliament President Savo Klimovski bridged a month as acting president. On December 15, 1999, he succeeded Kiro Gligorov as the second President of Macedonia.

During Trajkovski's tenure there were ethnic conflicts with the Albanian population of Macedonia, which in 2001 almost led to civil war. Trajkovski strove for compromise and reconciliation and opposed the strict nationalist line of most Macedonian politicians. In 2002 the World Council of Methodist Churches awarded him its Peace Prize for his contribution to peace in Macedonia.

Trajkovski played an important role when the Macedonian parliament passed a new constitution recognizing the Albanian minority and major non-Orthodox religious groups such as Catholics, Protestants, Jews and Muslims. He took a strong stand against bribery.

On the morning of February 26, 2004, Trajkovski flew to Mostar , Bosnia and Herzegovina , to attend an economic conference. Shortly before landing, contact between the Beechcraft 200 Super King Air and air traffic control was broken . Two hours later, the Irish Prime Minister Bertie Ahern , who was in Mostar as Congress Director, announced the death of Trajkovski. Nine people were killed in the crash.

The wreckage of the plane was found the next day near Huskovići in the Stolac municipality . According to the Bosnian authorities, the cause of the crash was bad weather and a pilot's error, but local media accused French SFOR troops who had taken over air traffic control in the Mostar area that day. After the Macedonian side presented new findings in connection with the crash, it was decided in July 2012 to set up a joint Bosnian-Macedonian government commission to investigate the causes of the accident again.

Trajkovski was married and had a son and a daughter.

President of the Republic of North Macedonia