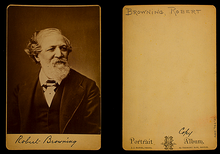 Browning's parents were Robert and Sarah Wiedemann Browning (in turn daughter of a German shipowner and a Scot), he had a sister named Sarianna. Browning sr. used his fairly high income as a bank clerk to build an extensive private library that contained numerous rare books - a preference that would influence Browning.

Browning was a gifted child: at the age of 14, he had already mastered French, Italian, ancient Greek and Latin . At the age of 16, he attended London University , if only for a short time . As a young man he aspired to the poets of English romanticism, with his particular admiration for Shelley , whom he strongly imitated in his youthful works.

His first long poem Pauline: A Fragment of a Confession was published anonymously in 1833 with financial support from his parents. According to Browning's own statements, not a single copy of the work was sold. Pauline , however, caught the attention of John Stuart Mill , who noted above all the “spasmodic morbidity” of the poem. Browning was later to distance himself from this early work, which was still very much committed to the Shelley confessional style. In 1835 the dramatic poem Paracelsus was published , which describes the main stages in the life of the alchemist Paracelsus in dialogic form . Unlike Pauline , Paracelsus brought him a certain degree of success and thus led to his first contacts with the London literary scene.

With his blank verse epic Sordello , which dramatizes an obscure episode in the medieval history of Northern Italy - namely the fate of the troubadour Sordello during the war between the Guelphs and the Ghibellines - Browning managed to ruin his reputation as a promising young author at one stroke. The work was generally regarded as illegible, the quote from Tennyson has been passed down that he did not understand up to the last line whether Sordello was a person or a city.

Browning's most fruitful creative phase began in 1841 with the publication of the dramatic poem Pippa Passes (which was filmed in 1909 by DW Griffith ) and lasted until 1869, the year the last volume of The Ring And The Book was published . Between 1842 and 1846 there were six plays, but only A Blot In The 'Scutcheon' briefly experienced an unsuccessful performance. The most important works of this period are the poetry volumes Dramatic Lyrics (1842) and Dramatic Romances And Lyrics (1845), in which Browning founded the genre of the dramatic monologue , a form of poetry in which the lyrical self is embodied by a fictionalized, realistic speaker figure . The two volumes from 1842 and 1845 contain some of Browning's best-known poems: My Last Duchess , Porphyria's Lover , Count Gismond , The Pied Piper Of Hamelin ( German: Der Piper von Hameln ) (all 1842); How They Brought The Good News From Ghent To Aix , The Bishop Orders His Tomb At St. Praxed's Church , The Glove , The Lost Leader (all 1845).

Browning's correspondence with Elizabeth Barrett Browning began in 1845 , which eventually led to the marriage of the two in 1846. Since Elizabeth's father did not approve of the marriage, the two fled to Italy, where they settled in Florence after a short stay in Pisa. Her son Robert Wiedemann ("Pen") was born there in 1849. During the 1850s, both continued to publish from Italy in England, with the works of Browning's wife receiving a much stronger response. Browning's own works only met with interest from a small group of recipients - including the Pre-Raphaelites . The main work of the Italian era is Men And Women (1855), a collection of 51 poems, including many of Browning's best-known and best dramatic monologues (including Fra Lippo Lippi , Andrea del Sarto , Cleon , A Toccata Of Galuppi’s , Bishop Blougram's Apology , Childe Roland To The Dark Tower Came ).

Elizabeth Barrett Browning died in 1861, and Browning returned to England with his son. In 1864 the volume Dramatis Personae appeared , which in poems such as Caliban upon Setebos and A Death In The Desert increasingly processed time-critical references such as the criticism of the Bible of Higher Criticism and the debate on evolution . The band developed into Browning's first commercial success. From 1868 to 1869 the long blank verse poem The Ring and the Book was published , which marked Browning's final breakthrough and sold so well that from then on he was able to live as a freelance writer without material worries.

From 1878 on, Browning stayed in Italy again and again. In Asolo he lived in the Scotti Pasini villa . He died in his son's home in Venice in 1889 and was buried in the Poets' Corner of Westminster Abbey .

Browning was one of the favorite poets of the polar explorer Ernest Shackleton . A line from Browning's poem "The Statue and the Bust" is immortalized on the back of Shackleton's tombstone: "I hold .. that a man should strive to the uttermost for his life's set prize" ( I mean .. a man should be up to Strive to the utmost for the right price of his life ).

Browning's poem "Childe Roland To The Dark Tower Came" is one of the starting points for Stephen King's saga " The Dark Tower "; also for the novel “Diamond Dogs” by Alastair Reynolds .

Charles Ives composed a Robert Browning Overture for orchestra from 1908–1912 .

In the franchise for the anime series Neon Genesis Evangelion , “God's In His Heaven ... All's Right With The World” from Pippa Passes is used in the logo of the NERV organization .