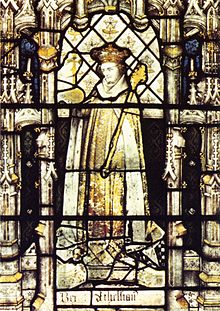 Æthelstan on a 15th century stained glass window in the chapel of All Souls College, Oxford

Although the Wessex king Egbert is traditionally listed first in the lists of England's kings, one can only speak of the Kingdom of England after the reign of King Æthelstan .

Anglo-Saxon coronation stone from Kingston-upon-Thames , with the name Æthelstan engraved on it

He continued the policies of his grandfather Alfred the Great and his father and was able to expand his sphere of influence considerably until he ruled over an area that largely corresponded to today's England. He made the neighboring kingdoms of Scotland and Wales dependent and made them pay tribute. When his brother-in-law King Sihtric Caech died in 927, Æthelstan invaded and annexed his Danish-dominated kingdom of Jórvík ( York ).

According to the Anglo-Saxon Chronicle , Æthelstan met in Eamont Bridge on July 12, 927 with the kings Constantine II of Scotland, Howell the Good of Deheubarth and Wales , Eógan I of Strathclyde and Ealdred, the Ealdorman of Bernicia . The kings there recognized the supremacy of Æthelstan, which is considered to be the establishment of the Kingdom of England .

The fact that King Eógan I (also known as Owain ) of Strathclyde was present at that oath at Eamont Bridge is mentioned in the 12th century by William of Malmesbury in his Gesta regum anglorum .

He forced the Welsh kings into submission in 928 and had them come to Hereford for this purpose , where they recognized him as overlords and had to accept considerable tribute payments. That Æthelstan exercised great influence over the various Welsh rulers is evident in the Welsh poem Armes Prydein Fawr (The Great Prophecy of Britain), as well as in the fact that Welsh kings are mentioned in the documents of Æthelstan as subreguli (sub-kings). He brought Exeter , Devon, into his domain by driving the West Welsh out of town. Æthelstan then laid the border between the Anglo-Saxon Wessex and the Celtic Cornwall on the River Tamar .

At the same time there were revolts against Æthelstan's rule in the north, whereupon he set off a military expedition against King Constantine of Scotland in 934. Thereupon the Scottish Constantine , King Owain of Strathclyde and the Scandinavian King Olaf Guthfrithsson of Dublin allied against Æthelstan and invaded his kingdom in 937. In the battle of Brunanburh , Æthelstan and his brother (and successor) Edmund succeeded in defeating the enemy alliance.

Æthelstan called himself Rex totius Britanniae since 931 and was still far from being the unrestricted ruler of the island. For the southern part, however, this designation applies. He had trade and the means of payment regulated there and created mints for silver pennies in many places. His documents after 930 were made by a single firm in Winchester , which suggests that there was a capital of his kingdom. In addition, Æthelstan was an important legislator. Culture was promoted even more than at the court of Alfred the Great , and there were numerous contacts with the continent; In addition, Æthelstan was considered a collector of holy relics.

Æthelstan's half-sister Eadgifu was married to the West Frankish King Charles the Simple . After the 923 was deposed, Æthelstan took her and her son Ludwig the overseas at his court. 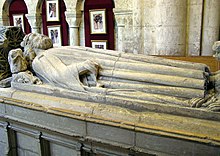 Not least because of this, Hugo the Great and Heinrich I tried to establish good relations with Æthelstan in order to improve their position in the dispute over the succession to the throne in western France. Several of Æthelstan's half-sisters then married into noble families on the continent, such as Edgith , who married the future king and emperor Otto I in 929. Edgith became, through her daughter Liutgard and her husband Konrad the Red, the ancestral mother of the Salian imperial family, which began with her great-grandson Konrad II .

Æthelstan died in Gloucester in 939 , but was not buried in the traditional tomb of the Kings of Wessex in Winchester, but in Malmesbury monastery , of which he was the patron. Mount Athelstan , a mountain in Antarctica , is named in his honor .