The photosphere (Greek ball of light, envelope of light ) is the lowest layer of a star's atmosphere ; Above the photosphere, the chromosphere joins in sun-like and late main series and giant stars , whereas in early stars the stellar wind follows directly .

Deep layers of the star can not be observed directly, because of the derived there photons at the free electrons in the star plasma scattered be. The number of such scatterings that a photon has to undergo on a statistical average in order to leave the star is called the optical depth . As a convention in astrophysics, the photosphere begins inside where the optical depth reaches or falls below the value of 2/3. The radius associated with this optical depth is considered the star radius .

Outside the photosphere ends:

The photosphere can play a role in measurements of the star's radius .

The above In practice, however, the definition is often used because the density in the outer regions of main sequence stars drops relatively sharply, and thus the radius values ​​of the various wavelengths for τ = 2/3 differ by only a few dozen to hundreds of kilometers. This is negligible in view of the typical radii of several hundred thousand kilometers and the other measurement inaccuracies .

In contrast, the decrease in density z. B. in the case of supergiants or in dense stellar winds are much more gentle. There the difference between the photospherical radius in the visual versus the infrared range can be clearly measured.

In some extreme star types, e.g. B. the Wolf-Rayet stars or the LBVs , the point at which the optical depth falls below the value of 2/3, is already far in the supersonic part of the stellar wind for visual light (contradiction between the two definitions above: overlap between inner and outer edge). In such stars, therefore, one cannot speak of a photosphere. Alternative definitions of the star radius, and thus also the star temperature, are used here.

Photosphere of the sun

Until a few years ago, the photosphere of the sun was the only one that could be spatially resolved. The solar photosphere is about 400 km thick (0.063% of the solar radius ) and has an average gas density of 3 · 10 −7  g / cm³ (corresponding to the density of the earth's atmosphere at about 70 km altitude ) at an effective temperature of about 5778  K (approx. 5504 ° C). The strongest absorption lines in the sun's atmosphere are called Fraunhofer lines after their discoverer . The chromosphere lies above the photosphere of the sun.

Chemical composition of the photosphere

The absorption of visible light takes place at relatively low temperatures. But at 5000 to 6000  K , only infrared light can be triggered via free-free transitions . Visible light cannot essentially arise through transitions at the neutral hydrogen , because this is only available to 0.01%.

Here the German-American astronomer Rupert Wildt found an important explanation in 1938 with the help of negative hydrogen ions. They arise from the addition of a free electron to a neutral H atom and are weakly stable; the free electrons are created by the slight ionization of sodium atoms . The negative H ion has only one bound state .

If photons with an energy of more than 0.75  eV , i.e. a wavelength of less than 1650 nm, hit a negative H ion, they knock out an electron, and what remains is a neutral H atom. Conversely, when a neutral H atom captures an electron, light with this wavelength is emitted. This process is the most important for energy transport in the photosphere.

The stable, gaseous negative H atom was predicted by Hans Bethe and Egil Hylleraas in 1930 and was detected in the laboratory by Herbert Massey in 1950 .

The photosphere appears largely uniformly bright, only interrupted by sunspots and flares . At higher resolution, however, it shows the granulation that makes the sun's surface appear grainy. The granular structures are convection cells that are created by upwardly directed hose-like currents and corresponding downward currents in the spaces and disappear again within a few minutes after heat is released. 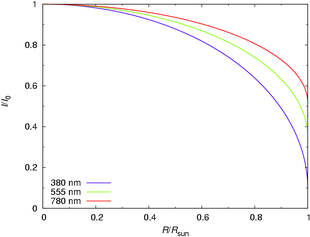 The apparent surface brightness of the photosphere, as it is shown in the telescope , decreases from the center of the projected sun ( solar disk ) towards the edge. This center-edge variation is stronger for short wavelengths (blue, violet, ultraviolet) than for long-wave light (red, infrared). It is approximated by:

The center-edge variation is caused by the temperature stratification of the photosphere: the temperature decreases with decreasing depth. With a flat exit angle, corresponding to the edge areas of the projected sun, a larger part of the light from the deeper layers is absorbed by the layers above than with a vertical exit in the center of the solar disk. As a result, with a flat exit angle, the light from the cooler layers has the greater share of the total light.