The Joint European Torus , currently the largest tokamak, taken in 1991.
The plasma vessel with a diameter of 6 meters and a height of 2.4 meters is almost hidden behind the orange iron yokes of the toroidal magnetic field coils and the measuring, heating and cooling systems. To compare the size, note the two technicians in the lower center.

The tokamak is a ring-shaped type of fusion reactor based on the method of magnetic plasma confinement . A plasma of hydrogen isotopes in a toroidal vessel is held together by a strong magnetic field ; In contrast to the stellarator , this field is partially generated by an electric current flowing in the plasma. The currently (2019) most powerful systems for developing fusion technology are based on the tokamak principle.

The idea of ​​the tokamak goes back to the Soviet scientist Oleg Alexandrowitsch Lavrentjew (1949) and was further developed in 1952 by Andrei Sakharov and Igor Tamm at the Kurchatov Institute in Moscow . In the 1950s, the first preparatory experiments were carried out in the Soviet Union . The Soviet T3 from 1962 is considered the first tokamak.

The successful development of civilian use of nuclear energy began around the middle of the 20th century, and the test explosions of hydrogen bombs also went as planned. In the 1950s, began physicists , the possibilities of energy from controlled nuclear fusion reaction of hydrogen - isotope to explore. The particles have to form an extremely hot plasma in which, under certain conditions (see Lawson criterion ), the thermonuclear reaction takes place in a self-sustaining manner.

If the hot plasma was enclosed in a classic vessel, the plasma would cool down immediately. To create a distance from the vessel wall, the Lorentz force is suitable, with which a force can be exerted on moving charged particles through magnetic fields (see also fusion by means of magnetic inclusion ). 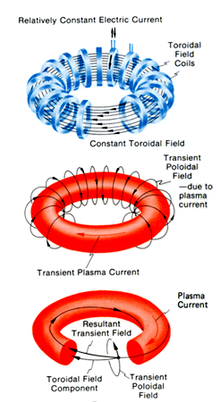 To implement this approach, Sakharov and Tamm proposed a torus- shaped fusion reactor , the ring of which is surrounded by field coils whose “toroidal” magnetic field keeps the plasma rotating in the torus locked (top figure).

However, a problem has already been recognized in theory that results from the magnetohydrodynamics of the plasma, according to which the particles rotating in the inner area of ​​the torus form turbulences with those in the outer area. To avoid this, the particle trajectories must also rotate within the torus cross-section, i.e. the magnetic field lines must run in a spiral. This twisting of the magnetic field lines is achieved in the tokamak by allowing an electric current to flow along the ring in the plasma itself. The current generates a magnetic field with poloidal field lines (middle figure). This is superimposed on the toroidal field generated by the coils , so that the desired spiral field profile results (lower figure). The field lines do not close after one revolution around the ring, but rather form concentric, mechanically more stable layers (see also river area ). The electrons and ions move under the Lorentz force on narrow, helical paths around one field line each.

The magnetic coils of a fusion reactor (not only in the tokamak) must consist of superconductors for an economical net energy generation so that their electrical energy requirements remain low.

The functional principle is compared in the following with a transformer. The plasma can act as the secondary winding of a transformer . A central “poloidal” field coil in the center of the torus acts as the primary winding, supplemented by further toroidal coils located coaxially with the torus. This method of generating the plasma current by electromagnetic induction cannot, however, as with any transformer, supply a continuous current, since the primary current cannot be continuously increased, so the transformer stroke is limited. From time to time the primary current must be switched off; the plasma confinement is lost during the break, the nuclear fusion stops and then has to be "ignited" again. Such a tokamak does not work continuously, but in pulses . For large tokamaks like ITER , pulse durations of around 15 minutes are expected. Pulse operation would only be an emergency solution for power reactors, because the large forces that the field coils exert on one another would occur as alternating loads, which would place particularly high stress on the structural parts.

Therefore, other techniques for creating and maintaining the plasma flow are being explored. Above all, neutral particle injection, which is also used for plasma heating (see below), and the radiation of electromagnetic waves of the so-called lower hybrid frequency come into question. It is hoped that these additional power propulsion methods will enable tokamak power plant reactors to operate continuously.

Heating up the plasma

In the fusion reactor, part of the reaction energy, mainly the recoil energy, will heat the plasma and compensate for the energy losses to the wall. In tokamaks, this state of “burning” only sets in at over 10 keV (over 100 million ° C) due to the low density and energy containment time and must first be reached in a different way for each new pulse (see above).

The hallmark of the tokamak concept is the electrical current induced in the plasma. This ohmic heating or resistance heating inevitably also causes the plasma to be heated. This is the same type of heating as the filament of an incandescent lamp or an electric heater ( hairdryer , fan heater, etc.). The heat output depends on the resistance of the plasma and the voltage. As the temperature increases, the electrical resistance of the plasma decreases and the ohmic heating becomes less effective. The maximum temperature that can be achieved by ohmic heating in a tokamak appears to be around 20-30 million ° C. To reach higher temperatures, other heating methods must be used.

Neutral particle injection means the injection of fast atoms or molecules into the magnetically enclosed plasma that is heated by ohmic heating. On their way through the plasma, the atoms are ionized and therefore trapped by the magnetic field. Then they transfer part of their energy to the plasma particles by repeatedly colliding with them, thus increasing the plasma temperature. Deuterium and tritium atoms are particularly suitable as neutral particles, so that this plasma heating also contributes to the fuel refill.

Gases can be heated up by suddenly increasing the pressure. In the same way, the temperature of a plasma increases when the enclosing magnetic field becomes stronger. In a tokamak, this compression is achieved by shifting the plasma into a zone of higher magnetic field strength (e.g. inward). Since plasma compression brings the ions closer together, the method has the additional advantage that it makes it easier to achieve the density required for the fusion.

High-frequency electromagnetic waves of suitable frequency and polarization are generated by oscillators ( gyrotrons or klystrons ) outside the torus. Their energy can be transferred to the charged particles in the plasma, which in turn collide with other particles in the plasma and thus increase the temperature. There are different methods, depending on whether the energy is first transferred to the electrons or the ions of the plasma.

The second possibility to bring about the helical twisting of the magnetic field lines required to confine a plasma in a toroidal magnetic field is the stellarator . Here the torus and / or magnetic field coils themselves are twisted in such a way, clearly in the form of a Möbius strip , that the poloidal part of the field (effective in the cross section of the ring) is generated by the coils instead of by a current induced in the plasma as in the tokamak.

A stellarator therefore does not require a current flowing in the plasma, which is generated in the classic tokamak in the manner of a transformer, and is therefore, in contrast to the pulsed operation of a tokamak, directly suitable for continuous operation. However, because of the more complex coil geometry, construction, production, maintenance and repair work are more complex. An optimization of the coil geometry by means of powerful computer programs and the production of such coils only succeeded in the 1980s; this gives the tokamak development a time head start. With Wendelstein 7-X , a large stellarator with such an optimized coil geometry was built for the first time in the northeast German town of Greifswald in order to examine the stellarator concept for its suitability for a fusion reactor. In 2018, plasmas of up to 26 seconds at temperatures of 60 million degrees were generated there. In the next few years the pulse energy is to be increased to 20 MW and plasmas are to be maintained for up to 30 minutes.

Mixed forms between the two concepts

Many physical and technical issues are similar for tokamak and stellarator. There are also mixed forms between the two concepts that are the subject of current research:

The tokamak development is investigating the extent to which additional external magnetic field coils with helical-stellarator-like symmetry can help to suppress or reduce unwanted instabilities at the plasma edge. These plasma edge instabilities, so-called ELMs (Edge Localized Modes), let hot plasma from the outermost layer of the enclosed plasma briefly collide with the plasma wall and the divertor , which can lead to damage due to the high power density. In order to suppress them, relatively small magnetic fields are apparently sufficient; the overall system is therefore still essentially a tokamak.

On the part of the stellarator , so-called quasi-toroidal magnetic field geometries make it possible to generate part of the required twisting of the field lines via the current driven by the pressure gradient of the plasma itself. This would be similar to a tokamak.

The most powerful systems to date for the magnetic confinement of a fusion plasma have been tokamaks. The Joint European Torus (JET) in Culham near Oxford, Great Britain , completed in 1984, is the largest tokamak in operation. Here and at the TFTR plant in Princeton, experiments have already been carried out with the mixture of deuterium and tritium required in a fusion power plant. In the short term, the fusion power achieved at the JET was 65% of the power used to heat the plasma. For greater fusion powers, larger dimensions and improved containment properties of the magnetic field are required. In addition, other technical questions have to be solved, such as the continuous supply of new fuel and the discharge of the fusion products (helium), the permanent cooling of the superconducting coils or the intermittent ignitions.

ITER , the next largest tokamak facility, has been under construction in Cadarache in the south of France since 2013 (as of 2020). With a fusion power of 500 MW, the plant is to demonstrate a net energy gain for the first time, but not yet produce any electrical energy. According to current plans, the first complete fusion power plant will be its successor, DEMO .

In Germany, the tokamak concept is currently being investigated at ASDEX Upgrade at the Max Planck Institute for Plasma Physics in Garching near Munich . The tokamak TEXTOR at Forschungszentrum Jülich was shut down at the end of 2013.

At the Italian Agency for New Technologies, Energy and Sustainable Development (ENEA), a compact tokamak with a highly magnetic field of up to eight Tesla, the FTU, is operated . Compact high-field tokamaks with fusion plasma have been pursued by some fusion researchers as a smaller alternative to ITER for the realization of self-burning reactors. After the Alcator C-Mod was shut down in 2016, there are further plans ( IGNITOR , SPARC , STEP ), but their implementation is uncertain.

Another tokamak is operated in China. The HL-2M tokamak has already generated plasma at 100 million ° C and is being modified. The new version should be operational from 2020.

In September 2018 it was announced that a group around Jong-Kyu Park from the PPPL had successfully solved some math problems related to the stabilization of the magnetic field. The calculations were successfully tested at KSTAR in Korea.