Principle: A movable piece of a magnetic core is pulled into the gap by the reluctance force

A related force is the Lorentz force , which describes the effect of force on a moving electrical charge in an external electromagnetic field.

The reluctance force can be derived from the change in energy that results from an infinitesimal displacement of the movable piece to the side:

The (idealized) area available for the magnetic circuit is given by

The direction of the deflection is  irrelevant, hence the amount bars . The size denotes the depth.

acts that pulls him towards the center. This is independent of the size of the deflection, except if the above derivation is no longer valid. This is the case when it gets too big. 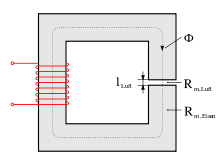 Tensile force in the air gap

The same applies as above

The following applies approximately to the inductance

With the power rule we get

Inserting it into the formula for gives the result: