Wendelstein 7-AS in Garching. The stellarator - back right - is almost covered by components of the diagnostics and heating.

Wendelstein 7-AS was an experiment to confine a hot plasma with the aim of developing a nuclear fusion reactor for generating energy. The system is based on the principle of the stellarator , in which plasmas are enclosed by magnetic fields that are exclusively generated by current-carrying coils outside. In contrast to this, with the tokamak principle, the required twisting of the magnetic field lines is generated by a current that flows in the plasma itself.

Wendelstein 7-AS (for "Advanced Stellarator") was the world's first of a new class of advanced stellarators with modular coils and was operated from 1988 to 2002 in Garching by the Max Planck Institute for Plasma Physics . The experiment was very successful and made a decisive contribution to the development of continuously operational stellarators.

The follow-up experiment Wendelstein 7-X , which has been under construction in Greifswald since 2002 , was completed in 2014 and went into operation in December 2015. The reactor suitability of the selected arrangement is to be examined with plasmas in long-term operation.

Structure of the experiment 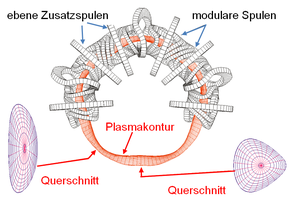 Top view of the magnet coil system of the Wendelstein 7-AS, the position of the plasma in it is shown in red. The cross-section of the plasma changes five times along the ring, each time from an upright elliptical shape (lower left) to a more teardrop-shaped one (lower right) and back.

One of the characteristic optimized non-planar coils exhibited in the Deutsches Museum .

Stellarators generate the magnetic field required to contain a hot hydrogen plasma exclusively via current-carrying coils outside the plasma. Since the current can flow continuously there, stellarators are candidates for a later fusion reactor that will operate continuously . In the alternative tokamak concept, on the other hand, part of the required magnetic field is generated by a current flowing in the plasma itself. At the moment, it is not yet possible to continuously maintain this electricity at a reasonable cost.

Wendelstein 7-AS was the first stellarator with modular - i. H. separate coils placed along the plasma ring, which reach the required magnetic fields through their twisted shape. The large number of degrees of freedom that this made possible in the design of the magnetic field were used to bring the generated magnetic field closer to the theoretical optimum. In order to test the fundamental correctness of the concept as quickly as possible and also because of the limited computer capacity available until 1980, Wendelstein 7-AS was initially only partially optimized. Only in the next step, the fully optimized Wendelstein 7-X stellarator, which went into operation in Greifswald in 2015, is the suitability of this concept to be checked.

Results of the project 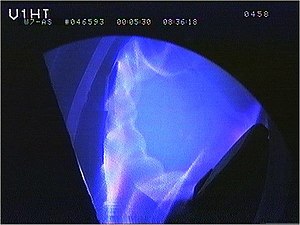 View through a vacuum window in the toroidal direction, ie along the plasma of W7-AS. The “cold” edge of the plasma appears bright, showing bulbous island structures in the center of the image, which lie against the graphite tiles of the wall (left side of the illuminated image section). The thermal radiation from the hot center of the plasma tube (right half of the illuminated image section, diameter approx. 30 cm) is in the near X-ray range and is invisible to the camera; the plasma therefore appears diffuse and transparent.

Commons : Wendelstein 7-AS  - Collection of images, videos and audio files