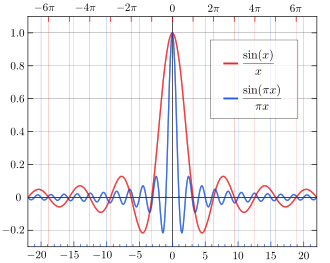 Are defined. In information theory and digital signal processing , the application areas of the function, however, the standardized form with the designation is mostly used :

The name for the non-standardized cardinal sine , which is common in German-speaking countries , should not be confused with the integral sine , the antiderivative of the -function.

At the liftable singularity at , the functions are continued continuously by the limit value or , which results from de l'Hospital's rule ; sometimes the definition equation is also written with case distinction.

Software packages like Matlab mostly use the standardized function, which can also be expressed as a product or with the help of the gamma function as:

The spherical Bessel function of the first kind is identical to the function: 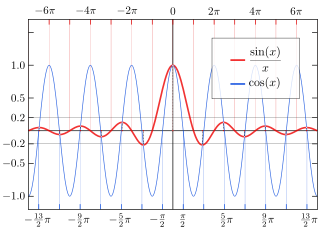 The extremes of si ( x ) coincide with their points of intersection (small, white points) with the cosine .

The extremes of with a positive coordinate are a good approximation

where a minimum is assumed for odd and a maximum for even . For the first extreme with a positive coordinate - the minimum at - the absolute error of the approximate value is already significantly smaller than 1/100.

In addition to these extremes and the absolute maximum at 0, the curve also has extremes due to its symmetry to the -axis .

Fourier transform of the rectangular function

The sinc function is the Fourier transform of the rectangular function

where the Kronecker delta denotes.

With a suitable normalization, these shifts in the sinc function thus form an orthonormal system in the function space  . The projection onto the subspace spanned by the results as

Because of the interpolation property  , that is

Functions from this subspace are therefore uniquely determined by their values ​​at the points .

The -th derivative of

can be determined analytically for everyone to:

The first two derivatives formed from this are:

The total area under the integral is

With the normalized sinc function, the delta distribution can be defined by the weak limit value:

The threshold that occurs is not an ordinary threshold because the left side of the equation does not converge. The limit value defines a distribution more precisely

for every Schwartz function . In the above equation, the number of oscillations per unit length of the sinc function goes towards infinity, but the function nevertheless oscillates for each in the interval .

This definition shows that one should not think of the delta distribution as of an ordinary function that only takes on an arbitrarily large value. The Gibbs phenomenon shows a similar problem .

The function is particularly important in digital signal processing . It occurs in the so-called sampling series (or cardinal series, ET Whittaker 1915), with the help of which a continuous band-limited signal is reconstructed from its sampled values or any sequence of interpolation points is continued to form a continuous signal:

Diffraction at the slit

When waves are diffracted at a slit, the amplitudes form a diffraction pattern that can be explained by the Fourier transformation of a rectangular opening function. This is why the cardinal sine is also known as the split function . The brightness distribution perceived by the eye when light is diffracted is, however, the square of the wave amplitude; it therefore follows the squared function .

In physics, the function term describes the pair correlation distribution of the energies of the eigenstates of heavy atomic nuclei. In mathematics, he describes the pair correlation of the zeros of the Riemann zeta function associated with the distribution of prime numbers . The commonality lies in the two underlying theories of random matrices , which the physicist Freeman Dyson first pointed out in 1972 in an interview with the mathematician Hugh Montgomery .

The tanc function is structurally very similar to the split function, but is not one of the cardinal functions.