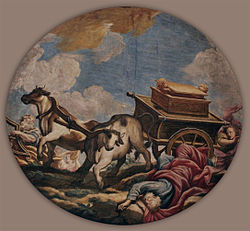 Usa (in a few Bible translations also Ussa, Hebrew עֻזָּה or also עֻזָּא, Greek Οζα) is a person from the Tanach / Old Testament . He died in transporting the ark to Jerusalem (2 Samuel 6 and 1 Ch 13).

The name Usa ( Hebrew עֻזָּה 'uzzāh and עֻזָּא ' uzzā ' ) can be derived from the word עֹז ' oz "strength" and would therefore be a nickname . The name could also be the short form of a sentence name with theophoric element, which would translate as “( YHWH / God) is power”. Related are the names Usija (“my strength is YHWH”), Usiël (“my strength is God”) and Usi (“my strength [is God]”)

Usa is presented as the son of Abinadab and brother of Eleazar and Achios (Achjos). His family belongs to the Levi tribe . In her house, which is said to be on a hill, the ark is housed and placed under the supervision of Eleazar after it has returned from the Philistines ( 1 Sam 7,1  EU ).

When David wants to transfer the ark to Jerusalem after more than 20 years ( 2 Sam 6,3  EU ), Usa and Achio have the task of driving the ox cart that transports the ark. The ark had to be carried by Levites on gold-plated rods that were attached to the four corners of the ark by rings ( Ex 25.10–16  EU ). When the cart wobbles precariously and the Ark of the Covenant threatens to fall, Usa reaches out and touches it to prevent it from falling. According to the law of God ( Num. 4,15.19  EU ), however, even the “sons of Kahat ”, whose task it is to transport the ark and all of its implements, are forbidden to “touch the sanctuary” under penalty of death. Therefore, after breaking this law, Usa will be slain by God because the divine anger is kindled against him ( 2 Sam 6,6–8  EU ). The place where this happens is then called Perez Uzza ("Uzza's fall") ( 1 Chr 13.11  EU ).

David is so shaken by this incident that he does not dare to have the ark transported any further. Instead, he has them put up in the house of Obed-Edom , a Gaditer ( 1 Chr 13.6–14  EU ; 2 Sam 6.2–11  EU ). It was only after he was told that the ark would bring blessings there that he dared to bring it to Jerusalem.

The rigorous punishment of the Israelite Usa is in contrast to the beneficial effect on the Philistine.