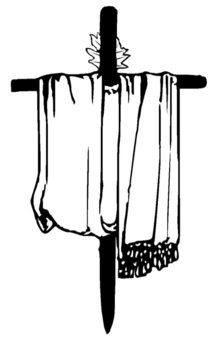 The symbol of religion is the darfash, a cross with a baptismal robe and a myrtle branch .

The Mandaeans are members of a monotheistic religious community with around 100,000 followers.

The Mandaeans (from Aramaic מנדע manda ' , knowledge) are also called Nazoraeans in some texts (from Eastern Amaic נצר:' guard ',' observe ', probably "people who observe [certain rites]"). This designation is partially limited to pious Mandaeans, but not to the priests alone. According to the scientific majority opinion, however, these Nazareans are not a branch of the Aramaic-speaking Christians , whose cross-denominational self-designation is also Nazareans (in the sense of Nazarenes after Jesus of Nazareth).

Since Islamic period can be found as a foreign name and Sabians ( Arabic   al-Ṣābi'ūn , probably of Aramaic סבא 'Baptize' ), a term that is used in the Koran for a (tolerable) book religion. In older literature they are also referred to as "John Christians" because their Messiah is John the Baptist . The sacred language , Mandean , is an East Aamean language.

The Mandäistik is the scientific discipline that deals with the study of language and the spiritual and material culture of the Mandaeans.

The Mandaeans probably go back to the Anabaptist movement in Jewish and Jewish Christian sects (especially Elkesaiten ) that existed in Palestine and Syria at the time of the New Testament . At times, research ( Rudolf Macuch , Kurt Rudolph and Rudolf Bultmann ) assumed that the Mandaean religion would develop independently of Christianity and that an already developed Mandaean community emigrated to Iraq in the 1st or 2nd century AD via Syria . In this phase of the Mandaean research, the development was in part even up to the 1st century BC. Dated. However, such early dates have proven to be untenable.

Rather, the current state of research is that one can only speak of Mandaeanism after an immigrant group of Gnostics has merged with parts of the native population in southern Iraq. The Gnostic element largely corresponds to a Gnostic Christianity that was prevalent in northern Syria and Mesopotamia ( Mesopotamia ) before it was incorporated into the Byzantine imperial church. The rejection of Christianity is also primarily directed against ideas that can only be ascertained in this region in the Byzantine period, so that it is assumed that the Gnostics who immigrated between the middle of the 2nd century and the middle of the 3rd century represented a heretical group of Christianity . Only the strongly stylized Harran-Gawaitha legend is available as a written source and evidence for the migration of the Mandaeans, but its emergence is to be expected quite late.

At the beginning of the 20th century, Heinrich Weinel , Eduard Norden and Richard Reitzenstein suspected that the birth history of the Baptist with the Evangelist Luke and the Mandaeans had been taken over from earlier Anabaptist groups. However, the analysis of the texts by Kurt Rudolph has shown that the disciples of John the Baptist had no relation to the Mandaeans. Rather, it is only in late Mandaean texts that some motifs from Christian sources - name and old age of parents, visit to the temple of Zacharias, naming - have been linked to a new Mandaean childhood story of John.

Before the discovery of the Mani code , it was believed that the father of the founder of the religion, Mani, was a member of the ancient Mandean Anabaptist group. Today we know that these were the Elke strings that were not identical to this group .

In the city of Ahvaz , members of the Manaean community perform prayers and baptisms on the Karun River every year on the occasion of the birth of their first prophet Adam .

Mandaeans in baptismal robes at the beginning of the baptism ritual on Sunday morning in Ahvaz (Iran).

The Mandaean syncretistic beliefs contain Jewish , Christian and Gnostic elements. John the Baptist is seen as the reformer of their religion, while Jesus is seen as a false prophet . John not only baptized Jesus, but also the Mandaean Redeemer, Manda d-Haije ("knowledge of life"). This was sent by the supreme god ( Mana rurbe ) to the earth ( Tibil ) created by the fallen demiurge Ptahil , in order to bring the revelation of their origins to the carnal Adam ( Adam pagria ) and his wife Hawa , so that they can find redemption through true knowledge . After the creation of the world , he went on a journey into hell in order to overcome and bind the evil forces (see Christ's journey into hell ). Manda d-Haije helps the souls of the dead on their ascent into the world of light, during which they have to pass through the guard stations guarded by demons. With the creation, Ptahil was helped by the demon Ruha (the equivalent of the Christian Holy Spirit ). At the end of the days Hibil (the heavenly Abel as a figure of light, who is often equated with Manda d-Haije) will redeem all pious souls from the underworld Ur , as will Ptahil and his father Abathur .

The basic sacraments of the Mandaeans are redemption through repeated baptisms , which take place in Sunday services and on special occasions (wedding, birth, death) in running water, mostly in the so-called Mandi basin, and the non-public mass for the dead and soul, which takes place in Ascension is intended to serve the soul and, together with baptism, forms the prerequisite for its redemption. The rites also include a cultic meal ( communion ), consisting of bread ( pita ) and a drink of consecrated water (mambuha) . This is "prepared" by the priest standing and "taken" by the believers. Baptism and meal show many parallels to the Syrian-Christian rite and go back to common roots.

In addition to the prohibited acts from the Ten Commandments , all forms of self-mutilation, including circumcision , voluntary sexual asceticism and drinking alcohol were prohibited. Marriage and the family are important moral tasks.

Membership in the Mandaean religious community is now based on ethnicity; converts are not accepted. However, according to the sources, this was different in pre-Islamic times. The ban may therefore be a response to the Islamic environment that encouraged conversions to Islam, but made conversions away from Islam the death penalty. By marrying non-Mandeans (including forced marriage ), Mandaeans lose their membership of the religious community.

The priesthood is hierarchically divided into Tarmide (disciples), Šganda (deacons) and Ganzbare (treasurer = bishops); Head is the Ris Ama (literally: head of the people). Today the upper hierarchical ranks are partially vacant, as most of the Mandaeans live in exile outside of their traditional settlement area.

The Mandaean houses of worship , called Mandi or Mašk (i) na, are small and resemble the Oriental Christian churches, but they do not have a bell tower. They have to be near flowing water, but they also have a baptismal pond in front of the building and are fenced. Its architectural form is divided into three degrees of holiness. Only the priesthood has access to the innermost part of these places of worship. The believers (women and men) linger standing in the narthex (anteroom).

The sacred book of the Mandaeans is the Sidra Rabba (lit .: great order; also called Ginza , treasure). Extract according to Lidzbarski:

“When John lives in that age of Jerusalem, takes the Jordan and baptizes, Jesus Christ comes, walks in humility, receives John's baptism and becomes wise through John's wisdom. But then he twisted John's speech, changed the baptism in the Jordan and preached iniquity and deceit in the world. Christ will divide the peoples, the twelve deceivers roam the world. Prove yourselves in that age, you truthful ones. "

The Sidra Rabba or Ginza is divided into two parts; the right Ginza contains mythological , cosmological and moral treatises , the left Ginza hymns and songs about the fate of the soul. Stories about John the Baptist are contained in the Book of John (also called the Book of Kings). The Mandean prayer book is the Qolasta , which contains liturgies for baptism and soul mass .

Several thousand or ten thousand Mandaeans still live in southern Iraq and neighboring Iran ( Chuzestan Province ). Exact statistics are not available due to the war events of the past decades. They are identified by some Islamic scholars with the Sabians and thus recognized as a book religion , which is why they were a relatively protected religious minority ( Dhimma status) under Islamic rule according to the law ( Sharia ) and were able to exercise their faith freely within certain limits. On the other hand, they were exposed to massive discrimination through Islamic family and civil law. Muslims had to pay a special tax ( jizya ) for exemption from using weapons, which Muslims were not allowed to do.

The Mandaeans belong to the upper middle class in Iraq, not least because of their traditional professions (primarily goldsmith and silversmith and jeweler, but also other crafts). Under Saddam Hussein's Ba'ath regime, religious minorities theoretically enjoyed state protection. Mandaeans came under pressure , especially from the beginning of the 1990s, in the course of the regime's counterinsurgency in southern Iraq (after the revolts after the Second Gulf War in 1991 were put down). After the fall of the regime in 2003, their situation worsened massively as they, like other Christian and non-Christian minorities, became the target of Islamist extremists. Community leaders fear their extermination in Iraq, according to a BBC report in March 2007 . There are only about 5,000 Mandaeans left in Iraq.

An important foreign congregation that strives to preserve and promote the Mandaean language and publishes texts in the original language lives in Australia. Another congregation with its own mandi (inaugurated in 2003, the only one of its kind in Europe) is located in Sweden (Stockholm). In Germany there is a community in Nuremberg (Mandaean Association in Nuremberg / Franconia eV or the General Association of Mandaeans - Germany eV) and another in Munich (Mandaeans in Germany in Munich eV).