The title of this article is ambiguous. Further meanings are listed under Vigna (disambiguation) .

Vigna is a genus in the subfamily Schmetterlingsblütler (Faboideae) within the family of the Leguminosae (Fabaceae). There are around 100 to 150types of Vigna . It is one of the genera of the Faboideae, the species ofwhich are called beans . According to the current state of the system, a distinction is made between New World Phaseolus beans and Old World Vigna beans.

Vigna TYPES grow as creeping or climbing, rarely self-erect, annual or perennial herbaceous plants , or rarely as subshrubs to exceptionally small shrubs . They are not armed with spikes or thorns. The climbing species wind their way up counterclockwise, i.e. That is, they are "left-winding" like runner beans and fire beans - that is, the other way around as in the illustration for Vigna unguiculata . Some species develop tubers .

The alternate and spiral or two-lined leaves on the stem are arranged in a petiole and a leaf blade. The herbaceous or leathery leaf blade is usually pinnate unpaired. There are usually three (rarely two to four) to 12 cm long pinna leaflet available. The flat leaflets are entire or lobed. The two persistent or early falling stipules are free from each other and not fused with the petiole; they can be designed very differently (for example heart or shield-shaped, sometimes spurred), sometimes they are just scale-shaped.

The flowers stand individually to a few in the leaf axils or in terminal or lateral, compound racemose or umbel-like tufted inflorescences . There are bracts and bracts present, but they can fall off early.

The short-stalked, hermaphrodite flowers are zygomorphic and four or five-fold with a double flower envelope . The four or five unequal sepals are fused with two sepal lips. The upper calyx lip consists of two completely or partially fused calyx lobes; the lower calyx lip consists of three calyx lobes. The flower crowns have the typical structure of the butterfly flowers. There are five nailed petals , two or four of which are fused. The colors of the petals range from cream to yellow and from purple to purple. The wings are not spurred but eyed and in some species have two to four appendages. The flag is developed normally. The shuttle is designed very differently depending on the species. The ten fertile stamens are not fused with the petals and significantly longer ones alternate with shorter ones or they are all the same. Nine stamens have grown together to form a tube. There are nectar glands on the disc. The individual upper carpels contain three to many (100) ovules . The thread- to pencil-shaped, straight or curved stylus is hairy and bearded on one side.

The legumes are formed. Only with the Bambara peanut ( Vigna subterranea ) are the legumes in the ground, similar to the peanut ( Arachis hypogaea ). The legumes can be similar to those of peas or be “thread-shaped”. The legumes with a short stalk, at most, are 25 to 92 millimeters long, hairy or hairless, straight to curved, more or less flat to pencil-shaped, septate between the seeds and, depending on the species, externally recognizable or not constricted. Each fruit contains three to 50 seeds. The mostly kidney-shaped or square seeds can have an aril (if available then often three-pronged). The unit of dissemination ( diaspore ) is the seed. 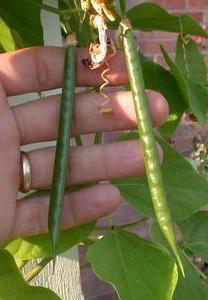 The genus Vigna belongs to the subtribe Phaseolinae of the tribe Phaseoleae in the subfamily Butterflies (Faboideae) within the legume family (Fabaceae).

Subgenus Sigmoidotropis : There are five sections:

No longer belongs to the genus Vigna :

Some species are cultivated for the production of food:

Since they fix nitrogen ( Rhizobium root nodules ), they are important for soil improvement.