The adzuki bean ( Vigna angularis ) is a plant from the genus Vigna in the subfamily of Schmetterlingsblütler (Faboideae) within the family of the Leguminosae (Fabaceae, Leguminosae). This crop is closely related to a number of other crops called " beans " such as the mung bean , from which so-called bean sprouts are made.

Stems with alternate leaves as well as inflorescences and legumes

Habitus, leaves and inflorescence of Vigna angularis var. Nipponensis in the habitat in Korea

Inflorescence with flower in detail of Vigna angularis var. Nipponensis 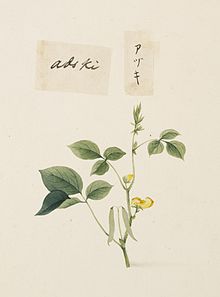 The descriptions in the sources differ somewhat, partly because the authors describe the wild forms or the cultivated forms.

The adzuki bean is an annual , rarely biennial herbaceous plant and reaches stature heights of rarely 20, mostly 30 to 90 centimeters; she can also climb up to 3 meters. It grows upright or spiraling counterclockwise; there are also creeping forms. The mostly green, with some varieties on purple-colored, angular stems are finely hairy.

Roots are formed at the nodes (Nodi). The tap roots are 40 to 50 centimeters long.

The first leaves of the seedling are opposite, long-stalked, simple and heart-shaped. The simple leaves , arranged alternately on the stem, are divided into a petiole and a leaf blade. The petiole is relatively long and slightly hairy. The leaf blade is threefold. The mostly entire leaflets are 5 to 10 centimeters long and 5 to 8 centimeters wide and ovate to rhombic and usually pointed to pointed. The leaflets are unequal, usually simple or slightly two- to three-lobed. Both sides of the leaflets are sparsely hairy. The two relatively small with about 8 millimeters Stipules are shield-shaped, often easy two columns with Anghängseln at their base, with each other free and not fused with the petiole. The secondary leaflets of the leaflets are lanceolate. The leaves can usually be kept until the fruit is ripe.

The flowering period in China extends from June to July. In the leaf axils stand the racemose inflorescences with five to six to ten (two to twenty) flowers each on the lower stem area and relatively short inflorescence shafts in the upper area . There are bracts available. The bracts are longer than the calyx. The relatively short flower stalk has an extra-floral nectarium at its base .

The hermaphroditic, short-stalked flowers are zygomorphic with a double flower envelope . The unequal, 3 to 4 millimeter sepals are bell-shaped fused with two calyx lips and five relatively short calyx teeth. The upper calyx lip consists of two completely or partially fused calyx teeth; the lower calyx lip consists of three calyx lobes. The petals are usually bright yellow or, more rarely, purple. The 15 to 18 millimeter long corollas have the typical structure of the butterfly flowers . The normally developed flag is circular with an edged upper end. The elongated wings are not spurred , but are nailed and eyed briefly . The wings are wider than the shuttle. The little boat, which is bent slightly to the right, is almost semicircular in the front and has a horn-shaped spur on its left side, it is nailed to the base. The ten fertile stamens are not fused with the petals. Nine stamens have grown together to form a tube. There are nectar glands on the disc . The only elongated, upper carpel is hairy short. The curved, stylus is hairy and bearded on top of one side, the slightly lateral scar is disc-shaped.

Two to six legumes hang on each fruit cluster and there are 5 to 40 per plant specimen. The hanging, almost bare, relatively thin-walled legume is 5 to 8, less often up to 13 centimeters and a diameter of 0.5 to 0, 6 centimeters slim, cylindrical and somewhat constricted between the 2 to 14 (5 to 12) seeds, so the seeds are visible as distinct bulges. When ripe, the legume is straw-colored, yellow, blackish or brown. The fruits ripen in China from September to October. When ripe, the legumes break.

With a length of 5 to 7.5, rarely up to 9.1 millimeters and a diameter of 4 to 5.5, less often 6.3 millimeters, the relatively small, hard seeds are elongated and round, rarely flattened, more or less cylindrical with rounded upper ends. The smooth seed coats are usually wine red or chestnut red, sometimes straw yellow, leather, cream-colored to black or spotted. The white hilum is 2.4 to 3.3 millimeters long and 0.6 to 0.8 millimeters wide and narrow. The seeds each weigh 50 to 250 mg. The embryo is almost white. The thousand grain mass is 50 to 200 g, for most Japanese varieties it is 130 to 150 g and for the Dainagon adzuki beans 180 to 200 g.

The adzuki bean is a therophyte .

The root system that starts from the taproot spreads over an area with a diameter of 40 to 50 centimeters. The nitrogen in the air is used by the symbiosis of the root nodules of the adzuki bean with the nodule bacteria Bradyrhizobium bacteria ( nitrogen fixation ). The root nodules are 4 to 10 millimeters in diameter and begin to develop when the first leaves unfold.

The anthesis usually begins in the morning and can last up to 40 days. The flowers begin to bloom at the bottom of the stem and bloom then continues upwards. There is mostly self-fertilization or sometimes cross-fertilization. The unit of spread ( diaspore ) is the seed.

There are very different assessments of the original distribution of the wild form. There is only agreement on Japan, Korea and Manchuria .

Vigna angularis belongs to the subgenus Ceratotropis from the genus Vigna .

Some authors distinguish between two varieties. In the Flora of China 2010 the variety Vigna angularis var. Nipponensis (Ohwi) Ohwi & H.Ohashi is considered a synonym. Kang et al. 2015 assume that Vigna angularis var. Nipponensis is the wild form and that the cultivated forms are summarized under Vigna angularis var. (Willd.) Ohwi & H.Ohashi angularis . Archaeological findings suggest that the wild forms were cultivated in different places in northeast Asia, and that cultural forms emerged several times independently of one another. It used to be assumed that the area in which the cultural forms developed was limited to parts of China ( Manchuria ), Japan and Korea. The archaeological findings show that cultural forms also emerged in the Himalayas (Tibet, Bhutan, Nepal).

The beans (= seeds ). and the flour made from it are important commodities in East Asian markets. Most of the varieties are used for grain use.

The oldest written evidence of the adzuki bean culture in Japan dates back to the 8th century. The adzuki bean is also an old cultivated plant in northern Korea and China. It has been grown in East Asia for 2000 years.

Mainly due to the intensity of cultivation, the yields of beans (= seeds ) are in the wide range of 4 to 8 dt / ha; for Japan and China there are even yield data of 20 and 30 dt / ha. The annual cultivation area of ​​the adzuki bean was estimated in 1997 in China, Japan, the Korean Peninsula and Taiwan at 670,000, 120,000, 30,000 and 20,000 hectares. The adzuki bean is grown in over 30 countries; outside of Asia there are cultivation areas in South America, in the southern states of the USA, New Zealand and in Africa, for example in the Congo and Angola. The adzuki bean can be grown up to 48 ° N, but the main growing areas are between 40 and 45 ° N. 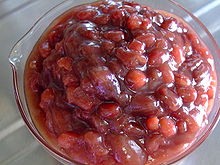 It is grown in tropical, subtropical to temperate areas; the temperature requirements are not very high. The annual average temperatures for optimal growth are 15 to 30 ° C. They tolerate high temperatures, but are sensitive to frost. In the tropics, higher altitudes are better for growing. Depending on the temperature and the type of soil, it is best to have annual rainfall of 1000 to 1500 mm; If there is a lack of water in the cultivation area, irrigation is sometimes used, the cultivation limits are between 500 and 1750 mm. Medium and warm soils are best suited for spring germination and early development . Bad culture conditions are particularly the result of high groundwater levels. Soil pH values ​​of 5 to 7.5 are suitable, the optimum is 5.5 to 6.5. The cultivation takes place almost exclusively in pure culture; However, the adzuki bean is also competitive enough in mixed cultivation.

The seeds remain viable for at least five years if they are stored at a relative humidity of around 15%. Between 8 and 30 kg of seeds per hectare are required. Usually the row spacing is 60 to 90 centimeters with a distance of 30 centimeters in the row. For germination, soil temperatures above 6 to 10 ° C are required and the best germination temperatures are 30 to 34 ° C. The germination time is 7 to 20 days. The growth is comparatively slow. From sowing to grain ripening it usually takes 80 to 120 (60 to 190) days, depending on the variety and climate, and according to information from the Congo, it can take up to 9 months depending on the cultivation time. The adzuki bean is a quantitative short-day plant , but day-neutral varieties exist. A fertilization takes place in Japan and Korea comparable to soybeans. The flowering period lasts 30 to 40 days, but can be up to three times as long if sown very early.

You can have the fresh legumes, the fresh beans (= seeds ). or use the dried beans. Ripe seeds and green legumes are eaten as vegetables and in soups or salads. Dried beans can be ground and this flour can be used to make soups, pastries or sweet drinks. The sweet, nutty taste of the adzuki bean means that it is used in Asia to make traditional desserts. For example, candy and ice cream are made. Red bean paste is made from adzuki beans . The production of adzuki bean sprouts, a sprout vegetable, originally came from Japan . The beans are popped like popcorn . The beans are candied. The adzuki bean is a coffee substitute .

The adzuki bean is used in many ways in Japanese cuisine. In Japan, the adzuki bean, together with rice porridge, is an important part of " azuki-gayu " in traditional ceremonies and celebrations. In Japan, adzuki beans are cooked to make “ an ”, an adzuki bean jam, or “ shiruko ”, a sweet soup with sticky rice cake. In Japan, for example, yōkan is made from adzuki bean flour.

The adzuki bean is said to be easier to digest than many other "bean" types.

The adzuki bean has been used as a medicinal plant in traditional Chinese medicine since the Tang Dynasty . Adzuki beans are important in relation to Yin and Yang , as they strengthen the Yang character. They are said to have an effect on kidney problems, abscesses, certain tumors, in obstetrics and other ailments, and on increasing the flow of milk. The yin of the leaves of the adzuki bean are said to have an antipyretic effect. In post- abortion treatment , seedlings are used.

The postulated health-promoting properties were scientifically examined in individual studies. In an in vitro study, antiproliferative properties were found that were effective against various cancer cells. A study in mice showed a decrease in serum levels for triglycerides , cholesterol and LDL . There was a decrease in blood sugar levels in patients with diabetes. However, the scientific evidence to date is far from sufficient to ascribe to the adzuki bean a certain positive medical effect that goes beyond the known nutritional content.

The seeds are also used as fodder .

The late-ripening varieties in particular are used to produce green fodder and manure . This reduces soil erosion, for example. Nitrogen fixation values of up to 100 kg N / ha were observed; the amounts depend on the soil moisture and the soil pH value.

The adzuki bean has a low physiological calorific value and low fat content . It is an excellent source of protein , fiber , vitamin B , folic acid , iron and potassium . Besides the carbohydrates, the raw protein content is quite high.

Common names in other languages ​​are for example: