The jack bean ( Canavalia ensiformis ), and Madagascar bean or giant bean called, is a plant species in the subfamily Pea (Faboideae) within the family of legumes (Fabaceae or Leguminosae). It is closely related to a number of other crops called " beans " , particularly the sword bean . The jack bean is one of the Caribbean islands and from Central originating or South America in the New World cultivated for more than 2000 years crop .

The jack bean is a short-lived perennial herbaceous plant or a subshrub and reaches heights of 0.60 to 1.60 meters. It is usually cultivated like an annual plant . The prostrate, semi-upright, upright or climbing stem axes reach lengths of 2 to 3 meters and branch well; older shoot axes can lignify somewhat. The strong root system extends relatively deep into the ground and forms a long taproot . The above-ground parts of the plant are hairy or bald. Germination takes place epigeously . The first leaves are fully developed about a week after sowing.

The alternate leaves arranged on the stem are divided into a petiole and a leaf blade. The petiole is 10 to 15 inches long. The sheet rhachis is 3 to 4.5 inches long. The leaf blade is threefold. The entire leaflets are petiolate 4 to 7 millimeters long. The herbaceous leaflets are ovate to obovate or elliptical with a rounded or pointed to wedge-shaped base and a pointed or pointed upper end with a length of 5 to 20 centimeters and a width of 3 to 12 centimeters. Both sides of the leaflets are sparsely hairy or bald. The nerve consists of six to seven pairs of lateral nerves and the network nerve is also recognizable. The small stipules fall off early.

The hermaphrodite flowers are zygomorphic and five-fold with a double flower envelope . The five sparsely downy hairy sepals have grown together to form an approximately 1.5 centimeter long, bell-shaped, two-lipped calyx. The trimmed upper lip of the calyx is longer than the calyx tube and the lower lip has three triangular calyx teeth. The approximately 2.7 centimeters long corolla has the typical structure of a butterfly petal . The five petals are sometimes white, usually light purple to purple in color. The flag is rounded with a diameter of about 2.2 centimeters and has two almost circular, back-curved ears and an approximately 5 millimeter long, flat and relatively wide nail . The wings are obovate-oblong. The boat is eyed and nailed. The ten fertile stamens are all fused. The only short and thinly stalked, upper carpel contains many ovules . The inwardly curved stylus ends in a small scar . 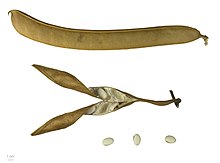 The legumes ripen in China in October. The somewhat flattened, somewhat curved, elongated and relatively thick, leathery legumes are briefly pointed at a length of 15 to 35 centimeters and a width of 2.5 to 4 centimeters. Each fruit flap has a raised rib at the belly seam and an extra rib parallel to it, 4–5 millimeters. The legumes, which are initially green and hairy, later bald and are usually brownish when ripe. Each legume contains 8 to 20 seeds.

The approximately 21 × 15 × 10 millimeter large seeds are elliptical to oblong and laterally flattened. The seed coat is ivory or white. The mostly 6 to 9, at most 15 millimeters long, oval and gray hilum has a brown border and is slightly drawn in. The thousand grain mass is between 1300 and 1800 g.

If the appropriate rhizobia stems are present, the formation of nitrogen-fixing root nodules is very good.

The flowers are mainly self-fertile . Sometimes done pollination by insects. Only the lower flowers of an inflorescence form fruits.

In the green legumes and especially in the seeds, the crude protein levels are very high. The jack bean is particularly interesting as feed and human food because of its high protein, carbohydrate and fat content. The hay contains a lot of crude protein and has a reasonably good digestibility of 56 to 59%. The very good protein quality has to do with the lysine content of 5.1%.

Structure of the Concanavalin A

The plant parts of the jack bean contain saponins , cyanogenic glycosides , terpenoids , alkaloids and tannins . These toxins must be washed out by suitable soaking and boiling before consumption. The seeds contain the thermolabile toxins Concanavalin A and B; they occur in the dry seeds with 2.5 to 3.0%. The Lectin Concanavalin A is a trypsin inhibitor. Canavanines are toxic to bacteria , insects, and other invertebrates . Canavanines are built into proteins , which then lose their function. Canavanines are not toxic to vertebrates , which have a more specific arginyl T-RNA synthase and therefore do not produce canavanyl proteins. In addition to Concanavalin A, the ureases in the mixture of toxins are particularly disadvantageous. These toxins make the plant parts very resistant to plant diseases and pests.

The legumes and seeds are eaten. Canavalia ensiformis is used for green manure , as a ground cover and as fodder.

If necessary, the green mass can be cut and fed, but it must be noted that it may contain toxins. The yields of green matter and forage are between 20 and 60 tons per hectare.

The grain yields can vary greatly depending on the growing conditions, the figures range from 7 to 10, 20 to 25 or even more than 50 quintals per hectare. It is a very productive type of plant. Young legumes and unripe seeds are prepared as vegetables. Green legumes can be harvested 80 to 120 days after sowing and ripe seeds can be harvested after 180 to 300 days.

In Indonesia , flowers and young leaves are used as food ingredients.

The ripe seeds have to be freed of toxins (mainly Concanavalin A) by soaking them in water, heating them for a long time and boiling them; the seed coat is often removed in the process. The cooked seed has little taste and a coarse, floury texture and is therefore usually not appreciated. Even if seeds are used as fodder, they must first be detoxified.

In Indonesia, roasted jack bean seeds are used as a coffee substitute .

The jack bean is probably not used as a medicinal plant in conventional medicine. There are studies according to which the contained Trigonelline and Canavanine could work against cancer. In folk medicine, however, the jack bean is used. In Indonesia and China, heat-treated seeds and pulses are used medicinally. In Nigeria , jack bean seeds are used as an antibiotic and an antiseptic .

Canavalin A has already been used to separate blood group substances ( immunoglobulins and glycoproteins ) and can be used in medical analysis. The urease extract of the jack bean is used in analytical laboratories.

The jack bean plant is a good ground cover and is used as protection against erosion in plantations .

The jack bean is only slightly affected by plant diseases. A root disease and a stem borer cause significant yield losses. The leaf beetle (Chrysomelidae) ( Platiprosopus acutangulus ) can cause significant problems in young plant populations by eating the leaves. The seeds are rarely attacked by storage pests or diseases, only Tricorinus tabaci sometimes causes problems.

The original home of the jack bean is on the Caribbean islands and in Central or South America. It has been cultivated by the indigenous people of the New World for millennia. There are reports of 2000 to 3000 year old grain discoveries that were made from Arizona to Mexico to southern Brazil and Peru , and the jack bean has also been cultivated on Caribbean islands for a long time. Today's cultivation area in the Neotropic reaches from the southern USA via Central America and the Caribbean islands to South America. Jack beans have also been grown in Indonesia, Taiwan , Hawaii , India, Tanzania , Ethiopia , Kenya and Australia since the 19th century . It was later introduced in other areas of Asia. It is grown in southern Arabia, East Africa , Southern Africa and Madagascar and less commonly in West Africa .

The jack bean can cope with different climates . It thrives at temperatures between 14 and 28 ° C. So it can be cultivated well in tropical areas up to altitudes of about 1800 meters. Once the plants have survived the youth phase, they survive weeks of drought thanks to their deep root system. The jack bean should be able to cope with annual precipitation of 650 to 4300 mm, the optimum should be 900 to 1200 mm during the growing season. The jack bean can be cultivated on very different tropical soils . It thrives best at pH 5 to 6 and it tolerates acidic to alkaline soils with pH 4.5 to 8.0.

Although the jack bean can feral in the tropics and subtropics, it is not rated as a dangerous invasive plant .

Trivial names in other languages ​​are:

In West Africa magical powers are attributed to the jack bean.