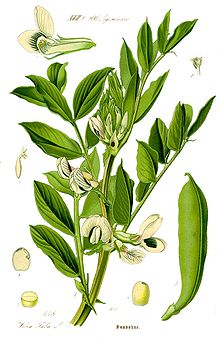 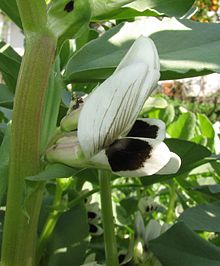 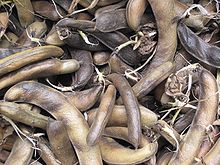 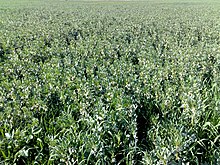 The field bean ( Vicia faba ), including field bean , broad bean , Säubohne , pig bean , Favabohne , broad bean , Large bean , horse bean , cattle bean , Faber bean or Puffbohne called, is a plant in the subfamily Schmetterlingsblütler (Faboideae) within the family of the Leguminosae (Fabaceae or Leguminosae). This crop belongs to the genus of the vetch ( Vicia ), in contrast to the common bean , which belongs to the genus Phaseolus . The field bean was chosen by the Association for the Preservation of Crop Diversity eV (VEN) as Vegetable of the Year 1998/1999.

The wild form from which the field bean originates is not known. Today the broad bean occurs only as a cultivated plant. Wild plants named as candidates ( Vicia narbonensis L. , Vicia galilaea Plitmann & Zohary ) are, according to current knowledge, close relatives, but not stem forms. According to recent findings, Vicia faba and Vicia narbonensis are siblings of a parent form that is now extinct. The subspecies Vicia faba subsp. Grown in India, the Himalayas and southeastern Spain is closest to the suspected wild form . paucijuga (Syn .: Vicia paucijuga (Trautv.) B.Fedtsch. ), a strongly branched growth form without a main shoot and without seeds. Relatives that could be the starting forms for Vicia faba are named: Vicia galilaea , which is native to the Middle East, and Vicia pliniana (Trab.) Muratova from Algeria, which is probably only a small-seeded form of Vicia faba .

Early "broad bean" forms were not very thick. These smaller seeds were first found in archaeological excavations in a Stone Age settlement near Nazareth in Israel , dating from 6800 BC. BC and 6500 BC BC, possibly also around 6000 BC Is dated. It is not clear whether these seeds are collected wild seeds or grown beans. Since the 3rd millennium BC, the broad bean has been found in many excavations in the Mediterranean region.

Since then, the field bean has spread to Central Europe . In the first centuries after Christ, the main area of ​​cultivation developed on the North Sea coast, because it is the only legume that thrives on salty soils near the coast. In archaeological excavations on the Feddersen Wierde , which in the second half of the 1st Jhs. v. In addition to seeds of barley and oats, there were also seeds of broad beans, flax and camelina .

In the Middle Ages it was one of the most important foods , mostly just called bone , due to the high yields. During this time, the large-seeded variety that is common today appeared for the first time. Cultivation has declined in Europe since the 17th century . From America introduced bean and runner bean were preferred for human consumption. The broad bean is mainly used as fodder today. Broad beans with bacon are still enjoyed today in Westphalia and the Rhineland.

The broad bean is an annual herbaceous plant that reaches heights of 0.3 to 2 meters. The tap root, which is up to 1 meter deep, is heavily branched in the upper area. The upright, unbranched stem is square, hollow and bare.

The pinnate leaves usually have two to three pairs pinna leaflet and a grannenartige tip without Ranke. The broad and oval leaflets are 3 to 10 inches long, 1 to 4 inches wide, blue-green, somewhat fleshy and hairless. The large stipules are 10 to 17 millimeters long, with entire margins or slightly toothed at the tip, and often have purple-brown nectaries .

The flowering period extends from May to June. One to six flowers are on short stems in the leaf axils.

The relatively large, fragrant flowers are zygomorphic and five-fold with a double flower envelope . The five 12 to 15 millimeter long sepals are fused tubular; the lower lanceolate calyx teeth are 5 millimeters longer than the others. The five petals are white or red. The basic color of the wings is also white or red, each with a dark purple spot. The almost right-angled stylus is downy on top and bearded hairy on the sides; it ends with a two-part scar. Nine of the ten stamens have grown together to form a tube.

The protruding, 8 to 20 centimeters long and 1 to 3 centimeters thick legumes are hairless, initially greenish brown to black when fully ripe and contain two to six seeds. Depending on the variety, the smooth seeds are shaped differently, 1 to 2.5 centimeters long and 4.5 to 9 millimeters thick. The colors of the seeds range from light reddish-brown to light to dark greenish-brown or light to dark purple, often with spots or points in similar or more different colors.

The field bean is an annual, summer annual therophyte . Numerous Rhizobium root nodules with the symbiotic , nitrogen-fixing bacterium Rhizobium leguminosarum are formed on the main and lateral roots .

The flowers are white, but their wings have a dark Flecksaftmal caused by Anthophäin from in plants otherwise rare dye group of melanin . During twilight the flag closes around the other parts of the flower and envelops them during the night.

The fruits , which ripen from June to July, are fanned out transversely by secondary tissue growths.

The broad bean is used both as feed for animals and for human consumption. Both the seeds and the whole shoot are used for feeding. For human consumption, the pod is usually only used for beans that are harvested very young. In fully grown beans, the pod contains tough fibers. The seeds can be used both fresh and dried; they can be stored dry without further preservation.

In the Mediterranean region the broad bean is used as a delicacy, for example roasted in Spain as Habas Tostadas or in the Italian salad Vignarola. In the Arab world, falafel and ful , among other things, are made from fava beans .

The seed yield is between 15 and 70  dt per hectare of cultivated area. In addition, broad beans are also grown for green manure.

The seeds contain about 25 to 30% protein , 1 to 2% fat , 40 to 50% carbohydrates , as well as fiber and water. There are extensive studies on the extraction, modification and use of the main ingredients, such as protein and starch, from the dried seeds.

The broad bean needs a location where its high water requirement can be met either by deep soil with a high water holding capacity or by a high groundwater level , uniform rainfall or artificial irrigation . It is therefore often grown in marshland and on heavy clay .

Since it is not sensitive to frost , the field bean can be grown in areas that are not suitable for other beans. Since the beans to develop a certain vernalization stimulus need and a good resistance to frost have that can sowing already at soil temperatures (frost free) 2-3 ° C germinating bean seeds in open ground to take place in February, the harvest is then in June . In particularly mild ( maritime ) climates such as England, field beans are sown as winter crops in the previous autumn. For better and deeper rooting and greater stability, sowing is carried out very deeply with a sowing depth between 6 and 10 centimeters, with autumn sowing even up to 15 centimeters. The harvest of the beans takes place in agriculture means harvester in Mähdruschverfahren that considerable amounts of nutrients containing beans straw remains kleingehäckselt in the field.

In 2020, the field bean grew on around 50,000 hectares of land in Germany. In cultivation, it ranks second after the pea among legumes, but does not even take up a quarter percent of all agricultural land.

Uromyces viciae-fabae is a major pest of the broad bean. A tillage reduces the infestation, since this fungus overwinters in infected plant parts. Chemical control with Folicur and pyrethroid-containing insecticides is permitted . Botrytis fabae causes the chocolate spot disease . The focal spotdisease causedby Ascochyta fabae is also important. Various soil-borne fungi can cause casserole and foot diseases.

Well-known pests are the bean beetle , the scarab beetle and the bean louse . While the aphids suck juice from the plant and the scarab beetle eats semicircular holes in the leaf margins, female bean beetles lay their eggs in the individual seeds of the growing bean pods. An infestation by the field bean beetle, which is considered an agricultural pest , is therefore usually only visible after the harvest through a small black point on the bean seeds.

Vicia faba belongs to the section Faba of the subgenus Vicia from the genus Vicia L. in the tribe Fabeae in the subfamily butterfly family (Faboideae) within the family of legumes (Fabaceae or Leguminosae).

The species Vicia faba is divided into two subspecies:

Field beans contain phytohemagglutinin , so they should only be consumed cooked.

For people with the hereditary disease G6PD deficiency, field beans can lead to increased breakdown of red blood cells, known as favism . In Central Europe, around 1% of the population has the G6PD deficiency, which can, but does not have to lead to favism. A larger percentage of the population in malaria regions - in the Mediterranean, Africa and Asia - is affected by the genetic defect.

The clinical picture of favism can occur after inhaling the pollen and after consuming the raw and, more rarely, the cooked beans. You may experience nausea, vomiting and diarrhea, stomach pain and dizziness 5 to 48 hours after eating. In mild cases, the symptoms disappear after a few days. In severe cases, acute hemolytic anemia develops . The disease is often more severe after inhaling the pollen. This disease can lead to death in rare and particularly severe cases.

The glucosides vicin (0.6–0.8% in the seeds of the plant) and convicin (0.1–0.3%) act in favism, while lectins and L-dopa act as accompanying substances . Vicin and convicin oxidize glutathione . In the absence of the reducing enzyme glucose-6-phosphate dehydrogenase (G6PD), symptoms of favism appear.

Poisoning symptoms from Vicia species also occur in animals , especially in horses, cattle and pigs. The clinical picture in horses shows itself as severe liver degeneration with colic. You should therefore refrain from exclusively feeding vetches. For some time now there have been varieties in which the vicin and convicin content is reduced to about a fifth. It is still unclear whether this will prevent favism. This breeding was mainly carried out to improve the quality of animal feed .

Vegetable of the year in Germany