The chickpea ( Cicer arietinum ), whether real giggle , Roman Kicher , Venus chick peas or field peas called, is a plant from the kind of chick peas ( Cicer ) in the subfamily of the Pea family (Faboideae) within the family of legumes (Fabaceae). It is not closely related to the pea ( Pisum sativum ). It is an old crop . 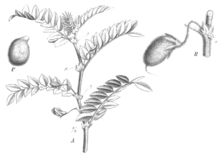 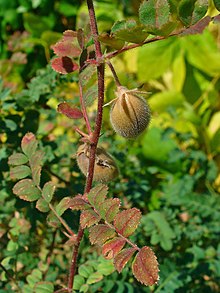 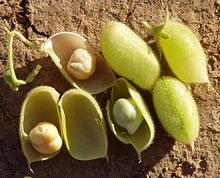 The chickpea in the pod

The chickpea is an annual herbaceous plant that reaches heights of up to 1 meter. The angular and glandular-haired stems are upright to lying and more or less branched. The plant has a deep taproot .

The alternate, stalked, about 4–8 cm long, short leaves are unpinnate. The 7 to 17 at the edge, in the front part, serrated, egg-shaped to elliptical or obovate and pointed leaflets are about 7 to 18 mm in size. They are almost sitting or sitting on a runny rachis . The whole leaves are hairy glands. The two to five-part stipules with unequal tips are hairy glands.

The following important information is missing from this article or section:
at least important generative characteristics are missing
Help Wikipedia by researching and pasting it .

On a longer stem, usually singly or in pairs, the flowers are in the leaf axils. The hermaphrodite flowers are zygomorphic and five-fold, and 10 to 12 mm in size with a double flower envelope . The flower stalks and the calyx are hairy glands. The flowers are on the glandular, long inflorescence stalk of the greatly reduced inflorescence and there are small bracts . The eilanzettlichen, green calyx lobes are pointed. The five white to white-purple or reddish to violet or bluish petals stand together in the typical shape of the butterfly flowers.

The roughly 2.5–3.5 cm short, somewhat puffed and glandular, greenish, tipped legumes usually contain one to two (four) seeds. The irregularly shaped, but rounded to egg-shaped, about 5-15 millimeters in size, smooth, more or less wrinkled seeds are beige to brown and green to black in color. The seeds or cotyledons can be eaten. The thousand grain mass is between 200 and over 600 grams, normal are around 300–500 grams. The seeds of chickpea can easily allow the Lathyrus sativus ( Lathyrus sativus be confused).

Cicer arietinum belongs to the Cicer series from the Cicer section in the subgenus Cicer within the genus chickpeas .

Chickpeas are grown in many subtropical areas of the world. India and Australia are world leaders in manufacturing.

Chickpea varieties make little demands on the soil and get by with little water . In the temperate climate zones , the yields are low due to the lack of heat.

The chickpea probably comes from the wild growing Cicer reticulatum Lad. 8000 year old finds of cultivated chickpeas attest to their cultivation in the Neolithic period in Asia Minor . The chickpea was spread from there to the Near East , the Mediterranean and India. In Greece , pulses have been part of the diet since the Copper Age. In Asia Minor, chickpeas have been found in Karmir Blur , Yoncatepe, and Bastam . Chickpeas are also known from Troy VIIb and Gordion .

The chickpea has been cultivated as a useful crop in Greece and Italy since ancient times. In Germany, the only seeds found come from Roman times. In the estate regulations of Charlemagne , the chickpea is listed as 'cicerum italicum' in chapter 70. Hildegard von Bingen recommended Kicher as a light and pleasant food and as a remedy for fever. Albertus Magnus distinguished three varieties: white, red and black or dark form. Hieronymus Bock mentioned the Zysern (term in herbal books of the 16th century for giggles: Ziser or Zisererbsen) not for use in the kitchen, but rather as a medicine. After the First World War , roasted dark-seeded chickpeas were used as a coffee substitute in the vineyards on the Rhine and in Württemberg . 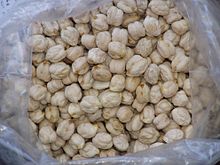 The chickpea is mainly grown for human nutrition . The main growing areas of the chickpea today are Turkey , North Africa , Mexico , Afghanistan , India , Australia , Pakistan and Spain . In Mexico and India, chickpeas are still an important staple food. There are two types of food that are used in the kitchen: the small, wrinkled seeds from India and the larger, round, beige-yellow seeds from the Mediterranean, which are better known and more widespread in Europe.

A serving of lablabi

They can be bought ready-cooked in cans or as dried seeds (similar to green peas). The dried seeds are soaked cold (12 to 24 hours and longer) and then prepared as a stew , broth or puree, for example . In the Middle East and North Africa, among other things, chickpeas are roasted and eaten like nuts. The falafel, which is widespread in the Middle East and North Africa, is also made from seasoned chickpea pulp . In oriental cuisine, a paste made from chickpeas and sesame , called Hommos we Tahini or just hummus (spelling varies in the Latin alphabet), is very popular. Another preparation made from chickpea flour is the Italian farinata , also known as socca in the French city of Nice . In addition, dishes with chickpeas ( garbanzos there ) are known in Spain , for example cocido madrileño is a cooked national dish . In the Orient , a pastry made from fermented seeds is known as Schimitt . In Turkey, twice roasted seeds are known as leblebi , which are eaten like nuts, and a stew with meat is also common across the country. In Provence , a pastry is made from a mixture of chickpea and wheat flour . In India, young chickpea plants are used to prepare a salad or the cooked chickpeas are consumed under the name Chana Masala . In Tunisia , lablabi , which is made from chickpeas, tuna, harissa and eggs, is one of the national dishes .

Chickpea flour is also used in Indian cuisine, in the batter for pakora , in the sweet balls called Laddu , which are offered to the god Ganesha , among other things , and in various side dishes and biscuits. It is very rich in protein and, unlike wheat flour, gluten-free. It is also used with yogurt as an exfoliant. Chickpea flour pancakes are also known as farinata in Italy , particularly Liguria , and tortillitas de camarones in Andalusia, along with shrimp .

The composition of chickpeas naturally fluctuates, both depending on the variety, the environmental conditions such as soil and climate, and the cultivation technique depending on fertilization and plant protection.

Details per 100 grams of dried chickpeas:

The physiological calorific value is 1294  kJ (306 kcal) per 100 grams of edible portion. The high content of the amino acids arginine, leucine and lysine is striking.

Raw "chickpeas" - correctly would be "chickpea seeds" - contain the indigestible toxin phasin , which is broken down by the action of heat. Chickpeas should therefore only be eaten well cooked. The chickpea also uses raffinose as a storage carbohydrate, albeit only in relatively small amounts of 290 mg per 100 g dry weight. This triple sugar cannot be metabolized directly by humans and thus reaches the large intestine, where it is broken down under the influence of intestinal bacteria and gas is formed. Raffinose is to be regarded as dietary fiber .

The most important pests in chickpea cultivation are Fusarium oxysporum , which causes Fusarium wilt , and Didymella rabiei ( Syn .: Ascochyta rabiei ). In some countries such as Mexico, Italy and Australia, the chickpea rust ( Uromyces ciceris-arietini ) is also important.

Origin of words and common names

The Latin name of the plant is cicer - possibly related to the Hebrew kikar (round, rounded). Because the Latin "C" is spoken of as "K" (ie, "Kiker") was then finally in the resulting MHG and NHG Kicher , ie to denote the chickpea seeds of Cicer arietinum .