The thale cress ( Arabidopsis thaliana ) is also cress or Gänserauke called and is a flowering plant in the family of cruciferous (Brassicaceae). It is relatively widespread in Eurasia and is classified as a " weed " in agriculture . 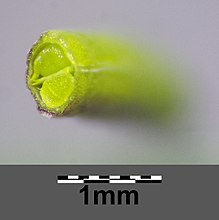 The fruit is compressed across the septum, from which the German generic name is derived. 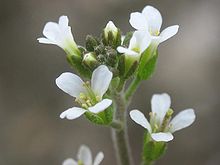 The Acker-Schmalwand is an inconspicuous, low, annual , herbaceous plant that reaches heights of up to 30 centimeters. The basal leaves are rosette and their stem is round. The leaves at the base are mostly serrated, the stem leaves, however, usually with entire margins.

The white flowers are 2 to 4 millimeters in size. The plant has pods that are 10 to 20 millimeters long.

The arable cress is of course widespread in the temperate climates of the northern hemisphere of the Old World . The total natural range extends from North Africa to the Indian subcontinent and from all of Europe via Siberia to eastern Asia. In many parts of the world with a moderate climate, the arable cress is a neophyte .

The narrow wall of arable fields typically grows in the accompanying field, preferably on open sandy soils or in loose, poor grassland. In Central Europe it is a so-called apophyte , as the species originally native to dry forest border locations changed to anthropogenic locations when forests were cleared by humans in Central Europe about 7000 years ago to make space for fields. These locations were more open than most of the natural ones and they were regularly disturbed and thus offered the Acker-Schmalwand optimal living conditions. The Acker-Schmalwand is a character type of the order Sedo-Scleranthetalia, but also occurs in societies of the Aperion association or the Digitario-Setarienion sub-association.

The Acker-Schmalwand is annual, winter annual (up to two years). It is rooted up to 40 centimeters deep. The flowers are small "nectar-bearing funnel flowers". Because of their inconspicuousness, the insect visit is only sparse, instead 99 percent self-pollination occurs. Nonetheless, cross-pollination by solitary bees, two-winged bees and bladder feet is also significant. The plant blooms from April to May, but as a typical field weed can bloom even later.

The pods are elongated after flowering and contain 20 to 30 long-lived seeds as light germs. Since the seed coat produces short adhesive threads when wet, the seeds can spread and spread unintentionally by humans with soil. The pods themselves are wind spreaders. The fruit ripening begins in June.

The Acker-Schmalwand was first described in the 16th century by Johannes Thal , whose name it bears in the specific epithet . He found it in the Harz Mountains and named it Pilosella siliquosa . Since then this species has been renamed several times. Several varieties have been described, but none of them are currently assigned taxonomic value.

Electron microscope image of the epidermis with stomata .

Electron micrograph of the epidermis with trichome .

As a model organism in biology

The field cress was established as a model organism in genetics as early as the 1940s (“the fruit fly of botany”). In 1943 Friedrich Laibach described the possibility of using Arabidopsis as a model plant. The advantages that the plant offers are for example: