A cultivar, also cultivar or cultivated variety, is a group of cultivated plants that differs from other, related groups on the basis of morphological , physiological , cytological , chemical or other characteristics. The word cultivar is a suitcase word , composed of cultivated ( cultivated ) and variety ( variety ).

Cultivars are not wild plants , but rather individuals that have arisen or are selected in horticulture, which must be stable in terms of characteristics and uniform among one another. A single deviant plant is therefore not a cultivar. Only when a genotype obtained through breeding , crossing or targeted selection has been reproduced identically sexually or vegetatively and all specimens retain their typical characteristics, is it a cultivar.

Because of its practicality and international distribution, the term cultivar is increasingly used as an alternative to the term cultivar, at least for ornamental plants. It is also defined as one of two ranks in the International Code of Nomenclature of Cultivated Plants (ICNCP). 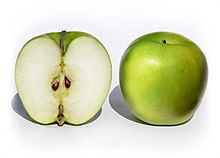 Cultivars can be of different origins:

For the recognition of new cultivars it is crucial that it must be possible to reproduce them sexually or vegetatively.

The categories Cultivar, cultivar-group (engl. Cultivar group ) and Grex (see below) are the only ranks whose use by the ICNCP is controlled.

Relation to the concept of variety

As a taxonomic unit of cultivated plants, the term cultivar is largely independent of the taxonomic ranks of the ICBN ; Cultivars can therefore usually not be equated with subspecies , varieties or forms .

The terms “variety” or “form” that are widespread in plant breeding generally correspond to cultivars. However, the names of varieties may be legally protected in their use after plant variety protection . Since the name of cultivars for the corresponding taxa must be freely usable by everyone, there are in many cases two names that correspond to one another. In addition, it should be noted that only "non-seed" plant varieties that can also be reproduced from the seedlings correspond to cultivars. The hybrid varieties , which are economically very important today, are therefore not included.

Until recently, the abbreviation "cv." Was used to denote cultivars. According to the nomenclature rules of the ICNCP, this spelling is no longer correct. Instead, cultivar names must be enclosed in single upper quotation marks after the scientific names of the species or genus to which they belong. Example: Helenium 'Moerheim Beauty'.

Instead of cultivar groups, the term convariety , which goes back to the Russian botanist Igor Sergejewitsch Grebenschtschikow (Latin convarietas , abbreviated convar.) , Was used until recently . This term can be found in numerous publications for cultivar groups, and in some cases it is still used today. For example, the head cabbage , which includes all types of cabbage with heads such as white cabbage, red cabbage, cauliflower, etc., is Brassica oleracea convar. called capitata.

Exclusively for hybrids between orchids that are artificially created by breeders, Grex has been defined in Article 4 of the ICNCP as a further level . A Grex is only defined by specifying its parents, who can either be orchid species or other Grexes.