Lamezia Terme is a city in the region Calabria in Italy with 70,187 inhabitants (December 31, 2019). The city is the seat of the diocese of Lamezia Terme .

Lamezia Terme is not far from the Tyrrhenian coast. There are jobs in the service industry and in agriculture (cultivation of olives, wine, chestnuts, wheat, fruit). 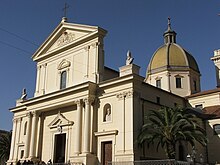 Lamezia Cathedral in the Nicastro district

The city of Lamezia Terme was founded in 1968 after the merger of the then independent municipalities Nicastro , Sambiase and Sant'Eufemia Lamezia . The chosen suffix Terme goes back to the Terme di Caronte sulfur springs in the Caronte fraction . Parts of the city (especially Sant'Eufemia and Sambiase) are in the area of ​​around 600 BC. Founded Greek colony Terina , which was founded in 203 BC. Was destroyed by Hannibal . In the 19th century the region was a center of carboneria . Many residents left the area at that time. Today over 20 clans of the 'Ndrangheta have their seat in Lamezia Terme . a. live from cocaine and heroin smuggling from Albania , including the Ndrina Giampà . From 2002 to 2011 there was a brutal Mafia war with over 50 dead, the so-called Faida di Lamezia Terme . Dozens of people were arrested in July 2013 and January 2017.

The place Nicastro was re-established around 1000 in the Byzantine era. His fort ( Neo Castrum ) dates from the Norman period . Heinrich , the rebellious son of the Staufer Emperor Friedrich II, was held prisoner here from 1240–1242 . The castle was badly damaged in the 1638 earthquake. The cathedral SS. Pietro e Paolo , built around 1100, was destroyed in this quake and rebuilt in baroque form.

Sambiase, the old Due Torri , which was also settled in Roman times and known for its warm springs, has grown around the monastery of San Biagio since the 10th century .

The village of Sant'Eufemia dates back to the time of the Norman rule. The center was relocated after it was destroyed by the severe earthquake in 1638. 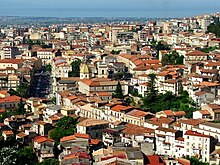 Lamezia's main train station is in the Santa Eufemia district on the route from Rome to Reggio Calabria . The districts of Sambiase and Nicastro are connected to the main train station via the railway line to Catanzaro Lido. At the weekend, especially on Sundays, the connections are sparse and often fail or are replaced by buses (rail replacement services). A bus runs at regular intervals from the airport to the main train station, three kilometers away (journey time 5 minutes). There is also a shuttle bus from the bus station in Crotone via Catanzaro to Lamezia Airport.

Lamezia Terme has Lamezia Terme International Airport (SUF). The importance of the airport lies in the development of the region for tourist traffic. In 1998, 672,000 passengers were handled, in 2015 this number had risen to 2,342,000.

In the district of Nicastro there is a cathedral and a castle ruin (Castello Normanno-Svevo) which are well worth seeing.

Municipalities in the province of Catanzaro in the region of Calabria