This article is about an Italian community. For the DOC wine from the province of Cosenza see Terre di Cosenza . For the Italian clergyman, Archbishop of Capua and Cardinal see Giuseppe Cosenza .

Cosenza ( Latin Consentia ) is the capital and the cultural center of the eponymous province in the region of Calabria in Italy with 66,457 inhabitants (December 31, 2019). 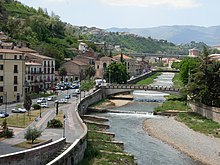 Cosenza is located at the confluence of the Crati and Busento rivers at an altitude of 238 m at the foot of the Sila Mountains .

Cosenza, the ancient consentia , was founded in the 4th century BC. Founded by the tribe of the Bruttier (Bruttii) and was their capital. It is first mentioned in connection with the expedition of the Molossian king Alexander I of Epirus to southern Italy, who lived here in 330 BC. Was buried. During the Second Punic War , the city did not join the main part of the Grosser Hannibal at first, but soon had to surrender to the Carthaginian general Himilkon . Three years later, 213 BC. BC, Consentia appears among the allies of Rome , but later stood again on the side of the cities hostile to Rome and did not fall until 204 BC. Chr. Permanently to the Romans. It was heavily influenced by Greek culture. Cosentia is also mentioned as an important city on the occasion of the war Rome against Spartacus . During the Roman Civil Wars, Sextus Pompey besieged 40 BC. The city, but could not take it. She was known for her fruit and wine growing; the apple trees bore fruit twice a year. It developed into an economic center on the Via Popilia .

In the imperial era, ancient authors rarely mentioned consent. In 410 Alaric I , king of the Visigoths , is said to have died in Cosenza after the sack of Rome and was buried with his booty in the river bed of the Busento. The grave has not yet been found. August Graf von Platen wrote the ballad Das Grab im Busento about it in 1820 .

After the end of the Western Roman Empire, Cosenza fell to the Byzantines and was then heavily disputed between the Lombards and the Saracens . In the 7th century it became the seat of a diocese , which was elevated to an archbishopric in 1150. In the 11th century the city came under the rule of the Normans . In 1091 she revolted against Roger Guiscard , but was again subjected. Under the Hohenstaufen it was the seat of the Calabrian court. Subsequently, Cosenza offered bitter resistance to the rule of the Anjou . In 1461 it was conquered by Roberto Orsini and suffered severe damage. From 1500 it was under the control of Spain. From 1555 to 1561 it was the center of the persecution of the Waldensians , ordered by the Inquisition , who had settled here towards the end of the 14th century.

In 1707, the Austrians succeeded the Spaniards in rule over the Kingdom of Naples , which then fell to the Bourbons . In 1799 Cosenza belonged to the short-lived Parthenopean Republic and was recaptured for the Bourbons by Cardinal Ruffo . 1806-15 the city was under French hegemony. It was then part of the Kingdom of the Two Sicilies and the scene of several upheavals for Italian independence from Bourbon dominance. The high point was the unsuccessful uprising of 1844 by the Bandiera brothers , who were executed near Cosenza. In 1861 the city finally became part of the newly formed Kingdom of Italy .

Cosenza was repeatedly devastated by earthquakes , such as in 1181, 1638 and on February 4, 1783, where more than 30,000 people were killed and all older structures collapsed. It also suffered from the earthquakes of February 13, 1854 and October 4, 1870. Another earthquake shook the city in 1905. In World War II, Allied bombing heavy destruction directed in Cosenza.

Cosenza is on the Sibari –Cosenza railway and on the Catanzaro – Cosenza narrow-gauge line of the Ferrovie della Calabria (FC). In 1915 the Paola – Castiglione Cosentino cog railway was opened, which was replaced in 1987 by a new line with the Santomarco base tunnel. At the same time, the old terminal station was replaced by a new one. 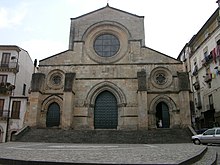 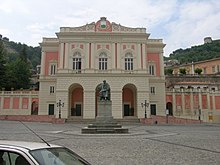