Cogne is one of the tourist resorts in the Alps that have come together in the Alpine Pearls program .

The traditional language in the Cogne Valley is a Valdostan dialect of Franco-Provençal . French was the official language since the 16th century and Italian since the late 19th century.

The place name comes from the dialect expression cougn, which means "place" in German, which refers to the main settlement in the valley.

With a municipal area of ​​213 square kilometers, Cogne is the largest municipality in the Aosta Valley in terms of area. There are five side valleys in the mountains: Valnontey, Vallon de Grauson, Urtier Valley , Valleille and Gimillantal.

The Grant Eyvia torrent is the main river in the valley and a right tributary of the Dora Baltea . The Cogne valley has an extensive mountain basin in the Gran Paradiso massif, which is separated from the main valley of the Dora Baltea by a long gorge. In the valley lies the small town of Cogne, which gained importance through ore mining . The last iron ore mining is Alpinart documented, a mine museum in a former mining village .

The left, south-western side of the valley is in the area of ​​the Gran Paradiso National Park . 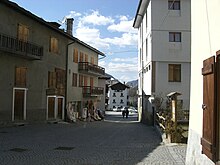 Cogne is the starting point for hikes in the Gran Paradiso area and on the Haute route no.2 . Cogne is part of the Gran Paradiso National Park. The Rifugio Vittorio Sella refuge can be reached from the Valnontey district and the Sogno di Berdzé al Péradzà refuge from Lillaz .

There is a small ski area near Cogne, which is accessible with a ski bus, a cable car at Laydatré and two chair lifts.

The community has been a member of the Alpine Pearls tourist network since 2011 , which promotes environmentally friendly tourism.

From the Dora Baltea valley, a mountain road leads from Aymavilles through the Grant Eyvia Gorge to Cogne.

The Cogne-Eaux-Froides mining railway was in operation from 1923 to 1979 .