Map of the Chianti area

The core area of ​​the range of hills is divided into the areas of Chianti fiorentino and Chianti senese . The Fiorentine part is located on the southeastern edge of the metropolitan city of Florence and includes the communities of Barberino Val d'Elsa , Greve in Chianti , San Casciano in Val di Pesa and Tavarnelle Val di Pesa . The Senese part is located in the northeast of the province of Siena and includes Castellina in Chianti , Castelnuovo Berardenga , Gaiole in Chianti , Poggibonsi and Radda in Chianti . The so-called Chianti aretino is the western part of the Arezzo province between Arno and Chianti and does not belong to the core area. The parishes of Cavriglia , Bucine , Pergine Valdarno , Montevarchi and San Giovanni Valdarno belong to it. Geographically, these are located in the western Valdarno (Arno valley).

The rivers or Torrenti Ambra , Arbia , Bozzone , Greve , Ombrone , Pesa and Staggia have their source in the hills of Chianti . In addition, the Elsa from the south and the Montagnola Senese flow through the area in the west , which partially borders the Arno in the north and north-east .

The highest point in the Chianti area is Monte San Michele , which is located in the municipality of Greve in Chianti. It reaches a height of 893 meters.

The area was first settled by the Etruscans and then by the Romans . Both cultures left a lot of traces - also when it comes to viticulture. The area was first documented as Clanti in the 8th century. In the Middle Ages, Florence and Siena fought for supremacy in this area. The name "Chianti" (Lega del Chianti) originally stood for a military alliance of the cities of Radda, Castellina and Gaiole, which emerged in the 13th century. Later the name was extended to ever larger areas. Villages and monasteries, castles and fortresses were built during this time, which were later converted into estates and villas when it became more peaceful again. During this time extensive forest clearing took place in order to create olive groves and vineyards. These changes brought economic success and international fame to the region. 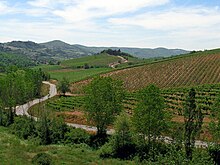 The entire Chianti area stretches from Pisa (in the northwest) to Montalcino (in the southeast) and is officially divided into nine sub-areas:

Viticulture in the Chianti Classico area

It is bounded to the north by the suburbs of Florence, to the east by the Chianti Mountains, to the south by Siena and to the west by the valleys of the Pesa and Elsa rivers. It is the heart of the Chianti region. A 70 km long wine route (the " Via Chiantigiana ", SS 222) connects the two large cities and leads through a great cultural landscape. Many well-known wine towns are lined up along the road like a pearl necklace. Only a tenth of the very wooded area (around 70,000 hectares in total  ) is used for viticulture. The Gallo Nero (= "Black Rooster") is the hallmark of Chianti Classico wines. The Consorzio del Marchio Storico Chianti Classico ensures compliance with the rules for good Chianti.

Well-known wine towns and sights (of the Chianti Classico area)

Montefioralle (Greve in Chianti) and the Chianti fiorentino hills

The Chianti hills in September