The first written document was issued in Cintoia on April 21, 1172: it certifies that the brothers Franculus and Galfredus from Cintoia from Spinello da Montegrossoli, with the consent of their father and of "Liquiritia, uxor Franculi", the "wife of Franculus", a Borrowed 28 silver pounds using their property, the estate and castle of Volpaia, as a mortgage . These documents were published by L. Pagliai within the collection Regesta Chartarum Italiae (p. 217).

The castle is located on one of the ridges that run from Badia di Montemuro towards Radda in Chianti . This ridge forms the watershed of two small valleys whose streams flow into the Pesa.

For Volpaia, the strategic location was particularly important because it was on the border between Florence and Siena . From a political point of view, this fortified town and the nearby parish of Santa Maria Novella belonged to the "Judicaria Florentina" since the 11th century. Certainly, however, the village was only included in the area dependent on Florence from the second half of the 12th century. It was then that the borders between the Republic of Siena and the Republic of Florence were first established. When the Republic of Florence organized its territory in 1250 and divided it into independent jurisdictions called "Leghe", Volpaia was assigned to the "Lega del Chianti" and the "Terzo di Radda".

The ecclesiastical division of the area and the road connections were also related to this arrangement. Volpaia was part of the diocese of Fiesole and its church, dedicated to the martyr Saint Lawrence , was attached to the parish of Santa Maria Novella. From this place, an important traffic junction in the Chianti area, a road that led through Volpaia formed the connection between the upper valley of the Pesa and the upper Arno valley . This was also the reason that a rest house for pilgrims was built in Volpaia in the 15th century. The road reached to the bottom of the Pesa, where parts of it can still be seen today. It also touched the town of Albola, which also belonged to the parish of Santa Maria Novella and from where you could easily reach the ridges that separate the Chianti region from the upper Valdarno.

The battles of the 15th century 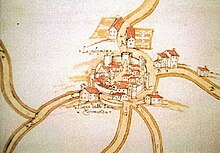 Volpaia, located at a critical point in the Chianti region, felt several times the centuries-long disputes between the republics of Siena and Florence. The two states, whose borders ran in this area, jealously watched over each other, and military clashes continued. The forays of the mercenary leader Alberico da Barbiano on the occasion of the war between Florence and the Visconti from Milan left the worst marks . Equally devastating were the two Aragonese incursions in 1452 and 1478. On several occasions the Castello di Volpaia took part in the defense of the positions of the Republic of Florence in the Terzo de Radda.

Especially during the second Aragonese incursion, the town showed its particular devotion to Florence. On December 24, 1477, the Republic of Siena and the King of Sicily, Ferdinand of Aragón , united against Florence. In the following year, this military alliance even received the papal blessing because Pope Sixtus IV also joined it; he was outraged by the Medici because they suspected his nephew, the Cardinal of San Giorgio, to be involved in the Pazzi conspiracy . In July 1478 the army of the allied Senese and Aragonese attacked the Florentine state in the valley of the Staggia , besieged the Castello di Rencine and soon conquered it. In August of the same year, the allies seized the most important small fortresses in the Chianti area, including the Castello di Volpaia. Since the third and sixth articles of this military alliance stipulated that all conquered territories and fortresses within a radius of 15 miles around Siena belonged to this city, Volpaia now apparently belonged to the enemies of Florence. But the month of August was not yet over when Volpaia rebelled against the Senese who had invaded here. Not only did they evict the crew that had been left behind for security, but they also captured Commissioner Cipriano from Siena, who was then taken to Florence.

When this uprising became known, the army of the allies returned with Federigo, son of the King of Naples, at the head. On September 2nd, they broke the resistance of the defenders and captured the Castello di Volpaia again. But even that shouldn't last: On October 7th, the fortress and most of the castles in the Chianti region were recaptured by the Florentines. Eventually the war shifted to areas outside of Chianti. An armistice was negotiated in Rome in 1479, and a final peace agreement was reached in March 1480.

Structure of the plant

Despite numerous additions and destructions, the Castello di Volpaia still shows the character of a Florentine fortress in the Chianti area.

The fortress consisted of a wall ring of approximately elliptical shape - including some towers for defense. The largest of these, located to the side of the gate and with a rectangular floor plan, served as the main tower. Apart from some parts of the wall ring, the main tower and one of the smaller towers have been preserved. A small round tower on the north side, on the other hand, must have been added at a later time, as its wall contains stones that are different and finer than those of the older, more coarsely assembled parts of the castle. This round tower was probably built after the destruction by the Aragonese in 1478, because in the second half of the 15th century, round towers were often built to withstand the attacks better.

A road divided the interior of the fortification lengthways in half. At the beginning of this street, at the wall ring, there must have been a gate at the time: the entrance to the fortress. Today this gate has disappeared due to structural changes on the entire southwest side of the wall. But it can still be seen in the drawings of the register of privileges from the 18th century. Significant remnants of medieval architecture have also been preserved in today's residential buildings.

Inside the wall ring was also the old church of Volpaia, still recognizable by the "round eye" on the facade, which is now walled up, and by the pointed arch above the very simple portal. The church has an almost rectangular floor plan, a single nave and a simple roof structure visible from the inside. This very simple structure could date from the 14th century, but it is also possible that it was built in the second half of the 15th century after the forays of the Aragonese, over the remains of a small earlier church. The right side, which coincides with part of the wall ring, is not clad with sandstone like the oldest parts of the castle, but shows an irregular wall decoration, in which finely worked limestone protrusions , perhaps spoils from the earlier church, alternate with fragments of sandstone . The church, which served as the steeple of one of the castle's remaining towers, was secularized in the 18th century when the new Church of Volpaia was built.

Architecturally significant parts or decorative sculptures are completely absent from the Castello di Volpaia, so that an exact dating of the remains of the castle is impossible. Nevertheless, it can be said that the oldest masonry, which is characterized by uniform cladding, goes back to the first half of the 13th century. The building material was taken from some nearby sandstone quarries. The sandstone gives the castle a somewhat gloomy appearance - unusual for the Chianti region, where the lightness of the limestone predominates in the fortresses.

Changes also took place in the architectural structure of the castle. In the 16th century, Siena saw a decline in power and in 1555 the republic fell. A long, peaceful period began for the Chianti region, during which the Castello di Volpaia gradually lost its defensive appearance, as the previous task of defense had become obsolete. Some late Renaissance portals that lead to apartments within the castle bear witness to this change. During that time, larger parts of the wall also disappeared and new houses were built. In the vicinity of the castle, oratorios and small churches were built, especially in the course of the Counter Reformation. Two of these insignificant buildings from the 17th century can still be seen today: the Ceppeto Chapel, very simple and without artistic pretensions, and the Chapel of the Madonna del Fossato, a small church with a rectangular floor plan. In front of her is a portico with pillars made of gray stone, which can be reached via a short steep staircase. Inside there is a fresco from the second half of the 15th century depicting a Madonna and Child. It was formerly in a tabernacle in the chapel.

The tower church of Volpaia is dedicated to Saint Eufrosino , the apostle of the Chianti area. It is commonly called " La Commenda " (the Coming) because it was initially bound to the Coming or the fief of various properties: in 1443, Ser Piero della Volpaia enfeoffed the Johanniter Fra Bartolomeo Canigiani.

The layout and construction of the church date back to the 15th century and the architecture suggests Michelozzo Michelozzi . The execution is more reminiscent of the style of Giuliano da Maiano . The building - erected between 1443 and 1460 - is definitely so important that a separate monograph is required to describe it. Inside, one of Cosimo Rosselli's most important works (1480) was kept until the secularization in 1932 : a large altarpiece with an architecturally executed, carved and painted frame, which is now in the Centro Nazionale di Studi sul Rinascimento (National Center for Renaissance Studies ) is located.