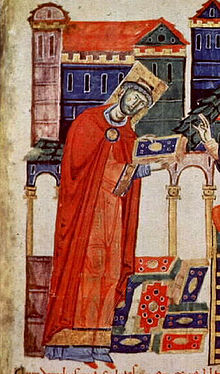 Dauferius came from a sideline of the Lombard princes of Benevento. After initially living as a hermit , he entered the Santa Sofia monastery in Benevento in 1048/49 and took the religious name Desiderius . In 1055, with the approval of Pope Victor II , he moved to the Benedictine monastery of Montecassino, where he succeeded Pope Stephen IX in 1058 . as abbot . During his thirty-year tenure as Abbot of Montecassino, the monastery was extensively renovated and expanded. He was also active as a writer and wrote, among other things, in 1076/79 a work on the miracles of the holy order founder Benedict of Nursia . He was cardinal priest of Santa Cecilia since 1059 and was in close contact with the reform papacy . So he probably mediated the alliance between Pope Nicholas II and the southern Italian Normans, concluded in Melfi in 1059, and worked as the papal legate in southern Italy. 1080 he mediated the reconciliation between the Norman leader Robert Guiscard and Pope Gregory VII. He also tried to bring about an understanding between Gregory and the German king, and met for this purpose in 1082 with Henry IV. Although he fell because of the Pope first in disgrace, he took Gregor in 1084 after his escape from Rome in the monastery of Montecassino and was also present at the death camp of Gregory VII in Salerno .

Abbot Desiderius was born on 24 May 1086 against his express wishes of a small group of followers of the late 1085 Gregory VII. In Rome , under the protection Duke Rogers selected from Apulia and Calabria to the Pope and took the name Victor III. From his election the reform party hoped for a mediation in the conflict between the 1084 of the antipope Clement III. (Wibert von Ravenna) Henry IV crowned emperor and the Lombard princes, with whom Dauferius was related. The name of the Pope should indicate Viktor II and was possibly chosen as a sign of willingness to reconcile with the Empire (the German Pope Viktor II, who died in 1057, was a partisan of Emperor Heinrich III ).

Just four days after his election, Viktor III. flee back to his monastery and initially surrendered papal dignity. There were divisions in the Gregorian camp, some of which rejected Viktor as too weak. Hugo , Bishop of Die , the papal legate in France appointed by Gregory VII , made a name for himself as a sharp opponent of Viktor . However, a synod of reform bishops in Capua confirmed the validity of the papal election in March 1087. Almost a year after the election, on May 9, 1087, Viktor, who was reluctantly willing to take office after all, was consecrated in a Norman coup in the easily accessible city of Leo in Rome , while the antipope, who had ruled since 1084, Clement III. stayed in Ravenna . Immediately afterwards, the reformists had to leave Rome again. Viktor spent the period of his pontificate mainly in his monastery, where followers such as the Margravine Mathilde von Tuszien had to visit him, and never moved beyond the southern Italian-Roman area. A second attack on Rome, undertaken for the enthronement of Viktor and this time accompanied by Mathilde's troops, led to fighting in the city in June and July 1087, in the defense of which Clement III. arrived from Ravenna. The fights were particularly directed at St. Peter's Church , which changed hands several times; the actual city of Rome, to the left of the Tiber , always remained in the hands of the Wibertines.

After retreating from Rome, Viktor III, who had been ill for a long time, stopped. in August 1087 from a council in Benevento , at which his inner-Gregorian opponents around Hugo von Die and Richard von Marseille were deposed and banned. According to an uncertain source, a solemn condemnation of the imperial antipope Wibert also took place. The ban on lay investment , a key concern of the reform popes, was just as little renewed as the curse on Emperor Henry IV. The council resolutions were not widely used and the council was dominated by the disagreements among the leading Gregorians. During the council, the Pope's health deteriorated further. Victor III died on September 16, 1087. in Montecassino.

The administration of his rival Clemens III. could Viktor III. at no time effectively affect. However, through his election, the reformers succeeded in preserving the continuity of the reform papacy and preventing its downfall with the death of Gregory VII. In this respect, his pontificate had a historically sustainable effect. The choice of the French Eudes de Châtillon (Odo, as Pope Urban II ) as his successor goes back to Viktor's recommendation. Urban and his successor Paschal II succeeded in enforcing the recognition of the Gregorian papacy in Europe in the coming decades. This development was strengthened by the crusade movement initiated by Urban's appeal .

A veneration of Victor III. started early. He was beatified in 1887 . Catholic Memorial Day is the day of his death on September 16.