The Gileppe dam is a dam in Belgium near the Limburg district of Goé between Eupen and Verviers . The main tributary is the stream of the same name, which rises in the High Fens . Its original purpose was to regulate the amount of process water for the textile industry in the Weser valley .

Already during the period when the region was under French occupation from 1795 to 1815, the first investigations were carried out to build a dam in the upper reaches of the Weser and Hill , which should above all ensure an even water supply for the flourishing local population at the time Cloth industry in the cities of Eupen, Dolhain, Verviers and Ensival , which had settled along the river. At that time the Weser and its tributaries carried enough water with them after every heavy rain and after the snowmelt, but due to the large-scale drainage of the neighboring forests and the introduction of forest cultures, in the intermediate phases some drying out and, as a result, pollution occurred the streams, making them unusable for the cloth industry.

But only years after the region around Eupen had become Prussian in 1815 and the region around Verviers in 1830 Belgian territory, the plan to build a dam was resumed in 1838. Since with the new division of states the upper course of the Weser was now also on Prussian territory, but the Weser flowed downstream through Belgium behind Eupen, there were difficulties with the responsibilities and the possible implementation. It took until 1857 before the city of Verviers initially commissioned engineer Eugène Bidaut (1808–1868) to sound out the construction of a dam in the catchment area of ​​the Gileppe stream. The first results of his investigations showed that the desired amount of water did not meet expectations and so the city of Verviers contacted Julius The Losen , the President of the Eupen Chamber of Commerce, to design a joint dam with him, as originally planned, but now cross-border. Bidaut included these considerations in his investigations and settled on an area in the area of ​​the tributary of the Getzbach into the Weser. However, since this was only five kilometers above the Eupen district of Haas in the lower town, which with its then around 3,000 inhabitants would have been directly affected if a dam broke, the project met with massive skepticism from the Eupen residents and the Prussian government, which officially started the process in 1864 put to the files.

Thus it remained with the application of June 13, 1860 by the city of Verviers to the Belgian central government to realize the Gileppe dam. A year later, this finally approved the construction and a grant of five million Belgian francs . Work on the dam began in 1867 and on July 28, 1878 King Leopold II was able to inaugurate the new dam.

The Weser dam, on the other hand, was built, but only after the Eupen district had also been awarded to the Belgian state as a result of the First World War .

The original dam was Europe's oldest concrete dam. The water absorption capacity of the reservoir was initially 13 million m³, the area 86 ha. 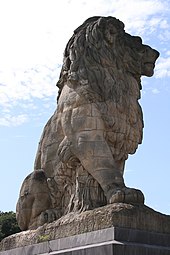 The landmark is a 13.5 m high sandstone lion, which consists of 180 blocks and weighs 300 tons. It stands on the top of the dam and faces north-east, towards the then district town of Eupen and the former Prussian border, which was about 5 km away. The performing artist was Antoine-Félix Bouré (1831-1883). In October 2000 the lion was completely restored.

In the 1970s, the province of Liège decided to build a 77.60 m high observation tower. The construction lasted from 1976 to 1982 due to financial and political problems, after which the facility remained unused until 1996 for the same reasons. When the observation tower was put into operation, it turned out that most of the view is obscured by forests and the surrounding hills due to tree heights not being taken into account. The operators have changed several times since 1997. Since 2007, the operation of the observation tower, including the museum and restaurant, has been in the hands of a voluntary association. At the beginning of 2008, on behalf of the Walloon Ministry of Culture and Tourism, a tourism center with a museum and presentation room, as well as a cafeteria open on weekends with bike rental, were put into operation.