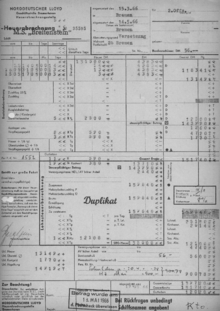 The wages (from mnd. Hūre , to mhd. Hūren : rent) is the wages of a seaman . Seafarers usually have an employment contract with the shipowner . Entering into such a contract is known as hiring .

In earlier times the employment contract was concluded by acclamation between the captain and the seaman (see also look around ). This practice, which deviates from the customs of the mainland and appears adventurous, has made hiring and hiring proverbial. Since employment contracts were easily concluded and easily dissolved, one speaks to this day - supported by the rhyme - of " hire and fire " (English: hire and fire ).

Another method, mainly used in northern Europe, was hiring on ships through a hay barn . They concluded employment contracts with unemployed sailors on behalf of shipowners and captains until the 1920s. According to their contract, harbor taverns were searched for seafarers willing to work. In some cases, the crew put together in this way did not know which ship they would be coming on by the time of departure.

A distinction must be made between the so-called Shanghai , in which a seaman is forced to serve at sea using illegal methods. This was also done by hiremates until the 20th century. Only when the seaman's code condemned this practice was it officially abolished in northern Germany.