The ship class known as the Ravenstein class is a series of three cargo ships belonging to the North German Lloyd (NDL). The newbuildings had been ordered during the Second World War . After the end of the war, the trio of ships were finally completed for the shipping company Compagnie Maritime Belge (CMB) and bought again by NDL in 1955.

Construction time and use at CMB

During the war, the NDL ordered three freight motor ships with unusual three-screw propulsion from the J. Cockerill shipyard in Hoboken near Antwerp. The delivery of these ships laid on Kiel as Coburg , Marburg and Regensburg was originally planned for 1943, but this was delayed due to the effects of the war.

The construction of the original type ship of the trio, the Coburg , which was confiscated by the German Navy and which was to be completed as a supplier, was accelerated at the beginning of August 1943 when construction work on the third building in the series, the Regensburg, was stopped. The ship was launched on December 8, 1943 and sunk at the shipyard on September 4, 1944 when the Germans withdrew. The ship was already lifted on December 27th and delivered as Stavelot to the Antwerp shipping company CMB on April 23rd, 1946 .

The Marburg was launched for Lloyd on May 17, 1944 and sunk at the shipyard on September 4, 1944 when the Germans withdrew. The ship was lifted in October and completed for Belgian accounts. On October 7, 1946, the CMB took over the ship as Houffalize .

The keel laying of the Regensburg took place in 1943, but on August 4, 1943, construction work on the ship was interrupted in order to continue building the Coburg . In 1944 Belgium confiscated the hull on the slipway. After an unnamed launch on February 14, 1946, the completed ship was finally handed over to CMB as Bastogne on July 27, 1947 .

The Compagnie Maritime Belge used the Stavelot , Houffalize and Bastogne trio in regular service between Antwerp and New York until 1955.

Meanwhile, North German Lloyd had worked on rebuilding its cargo ship fleet from 1950 until 1955 , after the shipbuilding restrictions of the Potsdam Agreement were largely relaxed . In addition, former Lloyd ships had been bought back by foreign shipping companies. Starting with the Rheinstein class , the NDL fleet had grown again to 27 cargo ships. In 1955, the series of three cargo ships built for the NDL during the war was acquired by CMB.

Use at the NDL 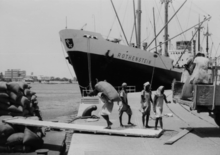 Loading of bagged goods onto the Rothenstein in Port Sudan

As the eponymous first ship of the class, the Lloyd took over the Bastogne as Ravenstein on March 25, 1955 . On May 11, 1955, the NDL took over the Stavelot as Rothenstein and on July 19, 1955, the Houffalize was renamed to Reifenstein . Initially, all three ships will be used in the East Asia service. The Rothenstein is given the additional function as a training ship for up to 18 cadets .

From June to December 1961, Bremer Vulkan converted the propulsion system to three new MAN Vulkan 5-cylinder diesel engines, and the Ravenstein was the only ship in the series to have a longer chimney. On September 1, 1970, when the NDL merged with HAPAG , the ships became the joint property of the newly founded Hapag-Lloyd . Ravenstein and Reifenstein are then used in the Australia service, the Rothenstein changes to the West Coast South America service.

On August 11, 1971, Hapag-Lloyd sold the ships to Coustoula Shipping Co., Famagusta. The names of the three ships were cut off. The Reifenstein continued as a tire and went to Elektra Shipping Co. in Famagusta in 1972. On February 22, 1978, the ship arrived in Kaohsiung for scrapping. The former Ravenstein ran on as Ravens and was passed on to Olistim Navigation Co. in Limassol in 1974, before arriving on June 10, 1978 from Basrah on June 21, 1978 for scrapping in Gadani Beach. The Rothenstein was named Rothens and was taken over in 1972 by the Tatjana Shipping Co. in Famagusta. As the last ship of the class, she too reached Kaohsiung for demolition on March 16, 1979.

The Ravenstein class at Christian Biedekarken's