The Oude Kerk ( German  Old Church ) is the older of the two large, Gothic town churches of Delft ( South Holland province ). The younger and better known is the Nieuwe Kerk (German New Church ). The hallmark of the Oude Kerk is the 75-meter-high west tower (Oude Jan) , which leaned 1.96 meters out of plumb in the soft subsoil . It stands on the Oude Delft canal in the oldest part of the city.

Presumably there was a wooden parish church dedicated to St. Hippolytus as early as the middle of the 11th century . In the 13th century it was replaced by a stone church dedicated to St. Bartholomew . This was followed by four more construction phases. The west tower with its five spiers was built in the years 1325-1350. At the end of the 14th century, the original basilica was converted into a hall church, so the side aisles were brought to the same height as the central nave . In the following century, however, the central nave was in turn increased so that the church has a basilical cross-section again. Shortly after 1500 a transept was started; The Flame Anthonis Keldermans is listed as the builder. Only the north transept was built.

The church and its furnishings were badly damaged in the city fire of 1536 and the iconoclasms during the Reformation in 1566 and 1572. The stained glass windows were destroyed in the explosion of the Delft Powder Tower in 1654. In the years 1949–1961 new stained glass windows by the master glazier Joep Nicolas were installed. 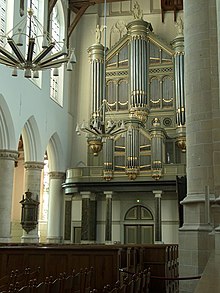 The church has three organs: two smaller organs from 1873 (north aisle) and 1770 (choir). The main organ dates from 1857 and was built by the organ builder Christian Gottlieb Friedrich Witte . The instrument has 41 stops on three manuals and a pedal . The actions are mechanical.

In the bell tower there is an extraordinary bell , the Trinity or Bourdon bell , which was cast as early as 1570 and weighs almost nine tons and, due to the vibrations it causes, may only be rung on high occasions, for example at the funeral of a member of the royal family in the nearby area Nieuwe Kerk .

While the New Church is the burial place of the Royal House of Orange-Nassau, numerous (around 400) people from middle-class backgrounds are buried in the Old Church. This includes: