Prince Moritz von Oranien ( Dutch Maurits van Oranje ), Count of Nassau-Dillenburg (born November 13 or November 14, 1567 in Dillenburg ; † April 23, 1625 in The Hague ) was after the murder of his father, Wilhelm the Schweigers ( Willem de Zwijger ), governor of Holland and Zeeland and since 1589 of Utrecht , Geldern and Overijssel as well as captain-general of the land and naval forces of the Netherlands . His mother was Anna of Saxony , daughter of Elector Moritz of Saxony .

Moritz, whose upbringing took place first in Heidelberg and from 1577 in Breda and Antwerp , studied in Leiden from 1583 . After the death of his father in 1584 he was appointed chairman of the State Council of the United Provinces. In 1585 the provinces of Holland and Zeeland elected him, and in 1590 also Utrecht and Overijssel and in 1591 Gelderland as governor . In 1590 he began as commander in chief with a fundamental reorganization of the united army of the Dutch provinces . Above all, he modernized and enlarged the artillery and reduced the size of the individual operating units. 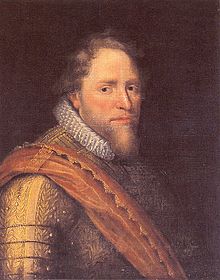 Prince Moritz of Orange, governor in the Netherlands

This military reform laid the basis for his campaigns from 1591 to 1594, in which he liberated Geldern, Overijssel, Friesland and Groningen from the Spaniards and received the governorship of Geldern and Oberijssel. The conquest of Zütphen , Deventer , Nijmegen , Geertruidenberg (1593) as well as Groningen (1594) and many other fortresses, the battles of Turnhout  (1597) and Nieuwpoort (against Archduke Albrecht VII of Austria on July 2, 1600) closed Moritz one of the most successful generals of his time. His battles in this regard were written as a diary by the later pensioner Anthonie Duyck , and published in the 19th century under the name of Journaal van Maurits' krijgsverrichtingen van 1591-1602 .

Within four years he drove the Spaniards from the seven provinces . In 1604, by attacking Sluis, he tried in vain to force the Spaniards to open battle and thus to give up their siege of Ostend prematurely .

In a sense, Moritz was a pioneer of modern warfare by returning to the principles of the ancient Romans, giving his army a permanent organization, waging war based on scientific principles and starting to besiege cities. In the politico-religious disputes between Arminians and Gomarists , Moritz last (1617) sided with the Gomarists. While Moritz secured Dutch independence primarily militarily, Johan van Oldenbarnevelt primarily pursued the political and diplomatic consolidation of this achievement. At first the two men worked closely together, but in 1609 there was a break. Van Oldenbarnevelt had negotiated a twelve-year armistice with the Spaniards, which Moritz strictly rejected. Although there was a noticeable economic boom during this peacetime, the liberation of the southern provinces, which Moritz von Orange was striving for, had become impossible. In addition, van Oldenbarnevelt supported the Arminians. Moritz had his former comrade arrested with the help of François van Aerssen . Oldenbarnevelt's allies Hugo Grotius and Rombout Hogerbeets were sentenced to life imprisonment at the Loevestein fortress , and the Amsterdam regents Jakob de Graeff Dircksz and Cornelis Hooft were temporarily removed from office by Reinier Pauw . Oldenbarnevelt was sentenced to death and executed in 1619 . In 1620 Moritz von Orange became governor, general admiral and captain general of the province of Groningen . In 1621 he positioned himself against an extension of the 12-year armistice with Spain.

From a relationship with Margarethe von Mechelen (1581–1662), daughter of Cornelis von Mechelen:

as well as illegitimate children from other circumstances 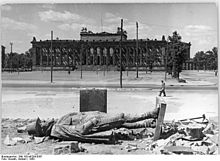 Overturned statue in 1950 at the Berlin City Palace

The island of Mauritius was named after him (Netherlandish Maurits, Latin Mauritius) in 1598 when it was taken over by Admiral Wybrandt van Warwyck for Holland.

Moritzplatz, newly built in 1841 in Berlin-Kreuzberg on what was then Köpenicker Feld, was named after the Prince of Orange .

In 1906, Kaiser Wilhelm II had his (distant) ancestor erected a statue modeled by Martin Wolff on the terrace of the Berlin City Palace . After an eventful fate, this statue has been preserved to this day and is currently on the construction site of the new Humboldt Forum in Berlin.

Governor of Holland , Zeeland and (from 1528) the province of Utrecht