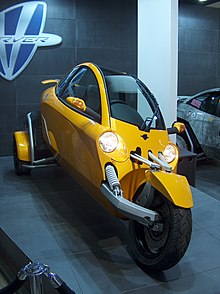 The Carver One is a three-wheeled vehicle from the manufacturer 2Drive Deutschland GmbH & Co KG. This ceased business operations on December 31, 2016.

The special thing about this vehicle - in addition to the seating arrangement - is the tilting technology : When cornering, the passenger cell tilts hydraulically into the curve depending on the speed and curve radius, which should allow a higher cornering speed. This is also supported by the active rear wheel steering. The angle of inclination is up to 45 °.

The Carver One can be driven in Europe with an ordinary driver's license. In this context, the Dutch homologation is decisive , which led to Europe-wide approval. In order to have the Carver One approved in any EU member state, a so-called COC paper, a certificate of conformity, is required, which confirms the homologation of the Carver. In countries outside the EU there may be different regulations. The Carver One is usually taxed like a motorcycle or a trike within the EU.

The tilting technology is controlled by the so-called " Dynamic Vehicle Control " system. According to the inventor Carver Engineering BV, DVC technology enables driving stability in almost all situations. Due to the lack of lateral forces, the driving experience can be equated with driving a motorcycle or flying an airplane without having to forego the comfort of a car. In the course of vehicle development, DVC technology was also licensed to third parties, including the Californian company Persu Mobility in connection with the Persu Hybrid vehicle. According to the insolvency administrator ER Butin Bik, this license was limited in time and has now expired.

Initially, the Carver was made by hand at the company 's headquarters in 's-Gravendeel near Rotterdam. The first series vehicle called Carver One (planned: 500 cars / year) was produced by the English manufacturer Prodrive on behalf of Carver Europe BV. After unknown disputes between the Dutch manufacturer Carver Europe BV and Prodrive, assembly was relocated to ACÜ in Überherrn (Germany).

In mid-2009, as a result of delivery problems and missing orders due to the excessive product price of 59,000 EUR (base), according to many observers, the “Fly the Road Club Forum” reports that bank accounts have been blocked due to the insolvency of Carver Europe BV. A few months later it was officially announced that Carver Europe is in bankruptcy. According to press reports, parts of the DVC patent are still in the hands of Carver Engineering and are therefore not affected by the bankruptcy. According to the insolvency administrator ER Butin Bik, this is not the case. All of Carver One's patents and rights are therefore likely for sale as a result of Carver Europe BV's bankruptcy.

Around the world there are currently around 200 vehicles in the hands of enthusiasts. Including event agencies and advertising companies.

The Carver One has been available as a new vehicle again since August 2011. The production is done by hand to order (build to order). This also ensures the supply of original spare parts as well as repairs and service for the vehicles produced under the direction of the Dutch Carver Group.

"I have to say, absolutely hand on heart, that I've never had so much fun in a car, really and truthfully, and I don't think I'd ever tire of it."

"Hand on heart, I have to say, I've never had so much fun in a car, really and truly, and I don't think I'll ever get bored of it."

Commons : Carver One  - collection of images, videos and audio files