from Wikipedia, the free encyclopedia
This is the spotted version , flagged on August 25, 2020 . There is 1 pending change that has yet to be viewed.

This article covers the city of Hilchenbach; for further meanings see Hilchenbach (disambiguation) .

Hilchenbach is a city in North Rhine-Westphalia , Germany . It belongs to the Siegen-Wittgenstein district .

Demolition of the Hilchenbach patch in 1772 (detail)

Hilchenbach lies within the Siegerland in the southwest part of the Rothaargebirge . Its urban area borders on Netphen in the south, Kreuztal in the west, Kirchhundem in the north and Erndtebrück in the east .

Hilchenbach consists of these districts :

The first documented mention of Hilchenbach goes back to June 17, 1292, when the place "Heylichinbach" is mentioned in a deed of donation from Countess Agnes von Nassau and her eldest son Heinrich to the Keppel monastery . However, there is evidence that a church in this area was founded between the years 950 and 1000 from the Corvey Monastery , which suggests a settlement.

In a document dated July 20, 1365, a permanent house ( Wilhelmsburg ) in Hilchenbach is mentioned, with which the nobles Wischel von Langenau were enfeoffed from 1489 to 1622 .

In 1625 the village of Hilchenbach was raised to the residence of Count Wilhelm von Nassau-Siegen-Hilchenbach as a result of an inheritance division . For this purpose, his father had acquired the Hilchenbacher Wasserburg from the Wischel von Langenau in 1622, as the Ginsburg had proven to be dilapidated. It has now been renamed Wilhelmsburg after its new owner and expanded structurally until 1627. This development subsequently raised Hilchenbach clearly above the other villages in its vicinity and also shaped the composition of its residents.

Hilchenbach was persecuted by witches from 1520 to 1653 : 21 women and men got into witch trials . The last witch trial took place in 1653. In this, chaired by the mayor 18 people (14 women and four men) sentenced to death for idolatry and witchcraft Theobald Stalp. Then ten were burned, while the rest were only beheaded and buried on earth because they amicably admitted their guilt. The victim of the last cremation on June 28, 1653 was Engen, Jacob Steinseifers zu Blittershagen, widow, commonly known as the Steinseifersche or the Klöncksche. The council of the city of Hilchenbach decided on May 25th, 2011 to rehabilitate the victims of the Hilchenbach witch persecution in a moral and socio-ethical way.

After Count Wilhelm's death in 1642, the office fell to his brother, the famous Count Johann Moritz , the "Brazilian", who bequeathed it to his nephew, Count Wilhelm Moritz von Nassau-Siegen . He began to set up a summer residence in Hilchenbach in 1682, and in this context the village was elevated to a town on May 1, 1687 . With the great fire on May 1, 1689, which cremated Wilhelmsburg and almost the entire settlement, and the Count's death in 1691, Hilchenbach's close ties with the courtly world were largely broken off. The palace, which was only partially rebuilt after the fire, subsequently became an official residence.

On May 24, 1824, the town was granted city rights . In a major fire on April 26, 1844, 42 buildings in Hilchenbach were destroyed by fire. In December 2016, a fire broke out in the traditional Deutsches Hof, which severely destroyed the well-preserved, listed half-timbered complex. The cause of the fire remained unclear, adverse circumstances prevented the fire brigade from deploying quickly and effectively. The remaining half-timbered front and other parts of the building were torn down after approval by the building department. Shortly after the decision, plans for the new building were presented.

Hilchenbach has been a climatic health resort again since 2018 , after initially being unable to meet the criteria of the Health Resort Act since 1972. The main reason for this was the leather factories that were producing in the city center until 1989.

(As of December 31, residents with main residence.)

Mayor is Holger Menzel (independent). He succeeds Hans-Peter Hasenstab, who has been in office since 2004 (also independent), who was confirmed in office on August 30, 2009 with 78.82% against challenger Hans-Georg Ballbach (CDU).

The coat of arms shows a yellow or gold wolf in a blue shield and was last approved in this form on April 13, 1970.

The heraldic animal refers to a striding wolf, which is present in the surviving jury seals of Hilchenbach with the inscription: S. (= seal) of the scheffen von Helchenbach on documents dated October 6, 1477 and November 17, 1485.

Alt-Hilchenbach is the seat of the symphony orchestra Philharmonie Südwestfalen , which was founded in 1957 as the "Siegerland Orchestra" (and German youth orchestra). Its subtitle is called the State Orchestra of North Rhine-Westphalia. Charles Olivieri Munroe is currently the chief conductor. There are also various music clubs, marching bands and choirs.

The “Gebrüder Busch Theater” is located in the Dahlbruch district and is also used as a “Viktoriakino” by a private provider. This is also where the 6010 film and video festival takes place. The work of the Siegerland-Wittgenstein artist family Busch is given special recognition by the “Gebrüder Busch Kreis”.

Ruins of the Ginsburg above Hilchenbach-Grund 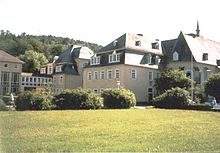 Keppel Abbey: View of the coat of arms hall with the Bridge of Sighs to the abbey wing, the New House and the collegiate church

The Ginsburg , located high above the Grund district, was mentioned in 1255 as a Nassau border fortification. The castle gained historical importance in 1568 when William I worked out plans for the liberation of the Netherlands at the castle and made the final preparations for the campaign there.

The Ginsburger Heide was the gathering point of the third army group under Count Ludwig von Nassau , which made Ginsburg and thus Hilchenbach a starting point for the Dutch struggle for freedom in the Eighty Years' War . Today only the keep of the castle remains after it was rebuilt in the 1960s, the rest of the complex is in ruins. According to publications by the “Ginsburg Association”, the keep is now almost half its original height.

The Gillerturm is a lookout tower built in 1892 on the Giller mountain , from which there is a view of, among other things, the Rothaargebirge and Siegerland .

The Hilchenbacher Markt is located in the center of the city. Many events, such as folk festivals, fairgrounds and more take place here. The expanse of the square, which is unusual for Siegerland standards, is characterized by handsome farm bourgeois houses, half-timbered houses and the exposed Evangelical Church. In the gable of the Sparkasse building there is a carillon which sounds with familiar melodies at fixed times.

The painter Lothar Grisebach provided an artistic view of the market square with his watercolor Marktplatz Hilchenbach , on which many well-known Hilchenbach personalities are depicted, including the former city director Hans Christhard Mahrenholz .

The former Premonstratensian monastery Keppel is one of the most important baroque gems of the Siegerland: Particularly worth seeing are the Romanesque-Gothic monastery church with its baroque interior, the new house , the convent hall and the small monastery museum .

The Keppel Monastery was founded by Friedrich vom Hain before 1239 and was under the protectorate of the Counts and Princely House of Nassau-Orange , later under that of the Prussian royal family . After the Reformation, in 1547, Keppel became an aristocratic women's monastery with a girls' school, later an upper lyceum and a seminary for teachers. Today Keppel Abbey is a grammar school with a conference and guest house and a small museum. Until secularization, the monastery was subject to changing denominational superiors . Until around 1912 there were separate farm buildings (e.g. the so-called Stiftsökonomie, one of the mightiest half-timbered buildings in Siegerland) with a Protestant and a Catholic part.

In Hilchenbach - at a different location - the teachers' seminar, built according to designs by the Berlin architect Gustav Knoblauch , was located since 1867 and existed until after the First World War . The seminar building was later used to house the Jung-Stilling-Gymnasium and, after its closure in 2008, the Carl-Krämer-Realschule. Thus Hilchenbach is next to Siegen the city in the Siegerland with the longest tradition in education.

The Breitenbachtalsperre is located between the districts of Dahlbruch and Allenbach , which with its reservoir serves to supply the Siegerland with water. There are numerous opportunities for hiking here.

The remains of a settlement from the 13th century are located on Altenberg, between the Müsen district and the Littfeld district of Kreuztal . A circular hiking trail leads through this former mining settlement. Finds are exhibited in the mining museum in Müsen.

The oldest known mining company in the entire Siegerland was located on Altenberg; lead and silver ores have been mined there since the 13th century. Because of their outstanding importance in the documentation of mining history, a large number of the finds from Altenberg were included in the German Mining Museum in Bochum . There the visitor is shown the life situation of medieval miners around a complete shaft extension using the Müsen finds . 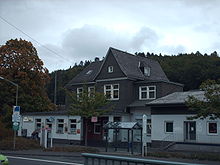 The Verkehrsgemeinschaft Westfalen-Süd connects the city with the neighboring towns with bus lines . Hilchenbach can also be reached via Siegerland Airport , located in the south of the district .

In the Dahlbruch district, SMS Siemag AG is one of the largest employers in the region. In addition, the BKK of Siemag, one of the oldest health insurance companies in Germany, is located in the company's buildings .

The voluntary fire brigade of the city of Hilchenbach is divided into five fire engines that are responsible for individual parts of the city.

The DRK Ortsverein Hilchenbach eV offers a variety of leisure activities for young and old. There are offers for many different population groups, from women's clubs to emergency services to the Red Cross Youth . There are currently 50 active volunteers between the ages of 17 and 65 and around 550 passive members. The chairman is Friedhelm Plate. The DRK emergency service consists of a rapid deployment group ( SEG ) that supports the fire brigade in the event of a fire , and Hilchenbach, together with the local associations from Freudenberg and Kreuztal, forms the fourth operational unit that is involved in major incidents ( MANV ) such as a bus accident, are used. An ambulance , a medical team , an emergency patient , a team transport, a 4-stretcher ambulance and a transporter are available as operational equipment. In 2008 the DRK moved into its new DRK social center in Ruinser Weg 2. This means that the social station, operational equipment and training rooms are housed in one building complex for the first time.

Other personalities with a connection to the city

Offices and municipalities in the Siegen district

Cities and communities in the Siegen-Wittgenstein district