The title of this article is ambiguous. Further meanings are listed under Vichy (disambiguation) .

Vichy [ viˈʃi ] is a French city ​​with 24,166 inhabitants (as of January 1, 2017) in the Auvergne-Rhône-Alpes region and the second largest city in the Allier department after Montluçon . The city is the seat of the sub-prefecture (French Sous- prefecture ) of the Arrondissement Vichy and seat of the community association Vichy Communauté .

Vichy is known on the one hand as an important spa and on the other hand as the seat of the Vichy regime or État français ("French State") from July 1940 to August 1944, whose government had its seat in this city.

The city lies on the banks of the Allier River , at the confluence of its Sichon tributary .

Vichy is considered the most important spa in France. Today the place is visited by around 30,000 guests annually. 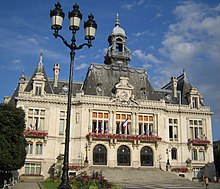 The place was founded by the Romans at sources already used by them under the name Aquae Calidae . In the time of Diocletian the area belonged to a certain Vipius and was therefore called Vipiacus , from which the name Vichiacus and finally Vichy developed.

In 1344, Duke Pierre I de Bourbon received ownership of the lands. 1410 one was here Monastery of Benedictine named Célestin founded. In 1527 the property of the Bourbons returned to the French crown. At the end of the 16th century, the first patients came to Vichy for the medicinal springs , which were soon to be regarded as true “miracle springs ”.

The springs of Vichy became really famous through the Marquise de Sevigné , who came here for a cure in 1676 and 1677 to cure the rheumatism in her hands, which apparently succeeded. Although she was anything but enthusiastic about the taste of the water, she praised its healing properties. 1761 came two daughters of Louis XV. here for the cure. Their nephew, Louis XVI. , had a new bathing facility built at the springs in 1787. Laetitia Bonaparte , Napoleon's mother , stayed here for a cure in 1799. It is attributed to their influence that the emperor had the Parc de Sources laid out in 1812 . The Kurhaus was inaugurated in 1830. Napoleon III made Vichy his summer residence for a few years. During this time the place became a fashion bath of the international nobility. English-style parks and boulevards were created, and villas, chalets and hotels were built. The casino was built in 1865 .

From 1899 to 1903 the building of the large Center Thermal des Domes followed with the pump room , a 700 meter long walkway and a bath in oriental style. The opera house was inaugurated in 1903 . Around 1900, 40,000 spa guests came to Vichy every year; shortly before the First World War , there were almost 100,000. In the 1930s the health resort experienced another heyday.

From July 1940, the city became the seat of the French Vichy regime under Henri Philippe Pétain during the Second World War , as it had over 300 hotels as a health resort and thus offered accommodation for the officers. From here the parts of the country of southern France not occupied by the Germans were administered. With the liberation of France by the Allies and the establishment of a provisional French government under General Charles de Gaulle on August 25, 1944, the four-year "rule" of the Vichy regime ended. On the following day, August 26th, thanks to the mediating intervention of the Swiss ambassador Walter Stucki , the city was evacuated by the units of the armed forces and liberated by the resistance troops.

After the war, Vichy resumed the spa business and again acquired the title of Reine des villes d'eaux (queen of the spa). But that changed in the 1970s when other beach resorts suddenly became “in” with celebrities. Under Mayor Pierre Coulon (1950–1967) Vichy developed into a city of sports; the river was dammed to the lake Lac d'Allier to offer water sports, and the Parc Omnisports (1963-1968) was created.

In addition, the renowned Cavilam language school was founded in collaboration with the University of Clermont-Ferrand . In the summer, more than 1000 students from other countries are looked after here, learning French in courses lasting several weeks. The largest proportion is made up of students from other countries who are preparing for their study visit to France in this way. As a result of the employment of numerous teaching and administrative staff as well as the income from the accommodation of students in families, apartments and dormitories, the school has become an important economic factor for the city.

Claude Malhuret has been mayor of the city since 1989 , previously Minister for Human Rights and, together with Bernard Kouchner, the founder of the organization Doctors Without Borders .

The Palais de Source (source hall) with the source of Cèlestins 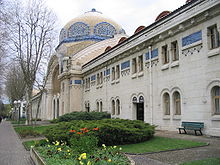 Twelve springs arise in the area of ​​the city of Vichy, of which only six are in use today. These are so-called sodium hydrogen carbonate sources, also known as sourling or sour wells , because they contain carbonic acid .

Pump room at the source of the Grand Grille, around 1900

The Vichy pastilles , which are supposed to promote digestion , are made from the salts of the springs . The water from the Cèlestins springs is also sold in bottles. Indications for a drinking cure in Vichy include: a. Metabolic disorders , stomach and intestinal problems, diseases of the liver and gallbladder and diseases of the urinary tract .

In the Thalassotherapy called is Vichy shower known to have a shower application when lying down, which was introduced in Vichy.

Vichy water was such a well-known trademark that Catalonia's largest supplier of mineral water took it over with Vichy Catalan .

In addition to Larbaud, Raoul Salan and Roger Désormière are also buried in the municipal cemetery .

Municipalities in the arrondissement of Vichy