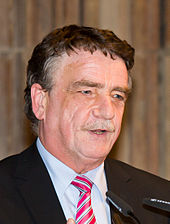 After graduation in 1977 was Groschek to 1979 time soldier in the Navy . In 1980 he began studying economics and communication at the comprehensive university in Essen . The qualification in 1984 was the first state examination for teaching at vocational schools with the subjects of economics and German. He then worked full-time as a speaker and managing director in political functions. At the end of the 1980s, Groschek switched to the real estate business, most recently at LBS Immobilien GmbH .

Groschek is married and has a son and a daughter.

Six years after joining the SPD, Groschek was elected chairman of the Oberhausen Young Socialists in 1980. He held this position until 1984. Since 1982 he has been a member of the board of the SPD local association Oberhausen-Ost.

After losing the state election in 2017 , Groschek was elected chairman of the SPD North Rhine-Westphalia at an extraordinary state party conference on June 10, 2017. Sebastian Hartmann was elected as his successor on June 23, 2018 .

Michael Groschek was nominated as a Bundestag candidate for the constituency of Oberhausen / Dinslaken at the SPD constituency conference in November 2008 with a result of 96.1% and was directly elected as a member of the German Bundestag in the Bundestag election on September 27, 2009 . Due to his election to the Bundestag, he resigned his state parliament mandate on September 30, 2009. On June 21, 2012, he resigned as a member of the German Bundestag. His successor as MP was Wolfgang Hellmich .

Groschek was a full member of the Defense Committee and the “ Disarmament , Arms Control and Non-Proliferation” subcommittee as well as a deputy member of the Committee on Transport, Building and Urban Development .

On June 21, 2012, Prime Minister Hannelore Kraft appointed Groschek Minister for Building, Housing, Urban Development and Transport of the State of North Rhine-Westphalia in the Kraft II cabinet . After losing the state elections in 2017, he left office on June 30, 2017.

Transport Minister of the State of North Rhine-Westphalia

See also : Ministry of Transport of the State of North Rhine-Westphalia

Minister of Construction of North Rhine-Westphalia